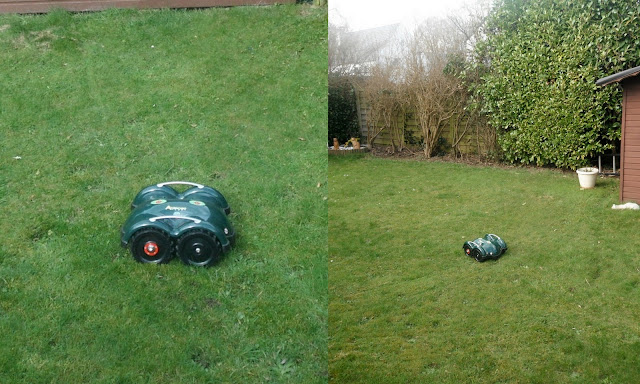 Wow never heard of them I need one it could run 24 /7/365 just keeping our 5 acres mowed. You think you have tall grass, ours is meadow grass and wild oats and radishes which grow over our heads if we don't get right on it and keep at it. We have to hire a tractor to mow it. I'm going to have to check it to this robot idea.

I love Oscar, looks like he is doing a good job. But I want an Oscar who will mow the grass, vacum the house, brush the cats and then bring me a cup of tea. Or glass of wine.

I don't have a robot, but I pay some one to do the lawns, Mr. C said he is allergic to the pollen grains, so he is happy to pay the man.

wow this is something really modern for me,the robot is a great helper!
Léia

I have got quite a big grassy area soon, so I might be persuaded to get one. I would also love the vacuum cleaning one! While I am at work, it vacuums the house. That would be so good!

I need an Oscar NOW. I am so jealous.

Wondered if these really worked. Mowing is for the birds..well, goats.

I have never heard of these before! How nice.

lol
What a nice thing.
I guess they took the idea from the indoor floor vacuum cleaner.
It's good for small yards.


Well, good luck with it. lol

I love this robot. What a clever invention.

What a cool invention! Do they have one that mops??

I dont have one to mow my lawn but I have one which vacuums my floors , I was very sceptic but it is an amazing machine when it needs to be refilled? it goes right back to his battery and then continues till it is done. Having had a heart attack it is a great help now would I say it does a superb job? no i have to move a lot of obstacles from its path, but it is adequate.

How cool is that? It's amazing what they can make these days!

That has got to be one of the best inventions ever!!! So cool!! Soon we'll have robots to do everything for us lol. ;-)

oh my goodness! i have never seen that little robot lawn guy before! that is great! you can still enjoy the smell of freshly cut grass, have a groomed lawn and the time to enjoy both.

This is too funny! A robot instead of a lover. Cute concept. Thanks for the laugh!

How fascinating! My 17 yr old grandson is at a Robotics competition in Milwaukee this weekend. Last year our team took first place in the world competition. Maybe he can build me a lawn mowing robot!

Does Oscar really do a good job? He seems to be going in various directions.

They are so neat!

We have such a small lawn that the poor robot would be bored here, though!

Thanks for a really cute link for the letter "R".