1. From almost one day to the other, the temperature raised from - 6°C (20 F) to + 9°C (48 F), and with that, it poured buckets of water down on the streets, made them first slippery, because of the melting snow and then wet ! The landscape from one day to the other changed from white to green and grey. 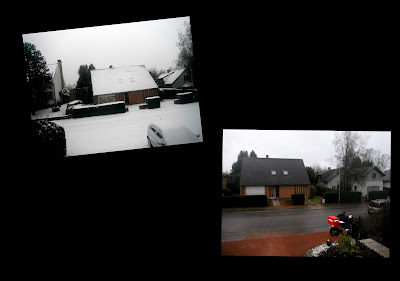 At least our Aqua Gym took place again, it had been closed because of the snow. It was the first time after Christmas that Dominique and I went there to pick up our normal routine for Mondays.

2. It was time to fill in the freezer again with yummy plates for the whole week. It took me not even an hour and I was back home. It rained so much that I could hardly see through the windshield ! My poor neighbor (the house you see above) had water in the basement ! The rest of the day I stayed home spending my time between computer and drying wet cats !

4. When I am stuck at home, I have sometimes ideas to change places of  the furniture in our house, if it is possible. And I found something ! Since at least 15 years we had an onyx table sitting in front of the sofas, and a round  table between them. I thought why not just change them around which would give more space. 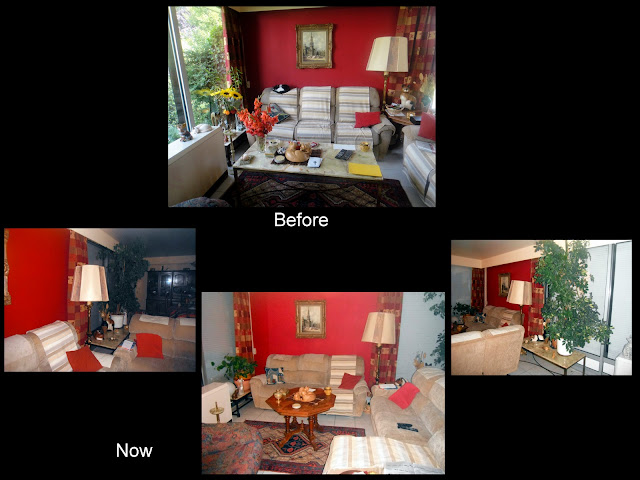 With the help of Mr. G. who for once agreed to a change, we pushed the furniture around and were satisfied with the result. 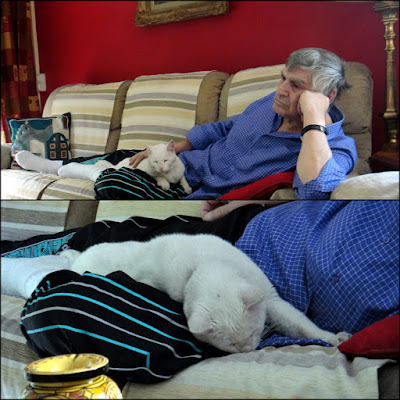 Now he can pull out the support for his legs and watch TV more comfortable, and not laying around on the Sofa like an old Roman. I only wonder why it took me 15 years to have this idea !

5. We celebrated again a birthday in my painting course, with cakes and champagne,  last week it had been cancelled because of the snow. A few classmates were absent, because they had a cold. With this roller coaster weather it's no wonder.

Ha-ha, I NEVER change anything in any house where I live. All my friends change things regularly. I knew a lady whose husband said he was too nervous to go to the bathroom in the middle of the night in case he didn't find his bed when he returned! My dil, Debbie changes furniture, curtains, ornaments, and bedding about three times a week. Mmm. I cannot even think how to move my bed around and my lounge is fine as it is! I see you have much more space with your new furniture arrangement. I'm sure Mr G and Arthur are really comfortable now! Have a great weekend. Jo

My little family room needs to be redone. But with the four dogs, I hate to get a new love seat and toss the old sofa. Right now, we are a little cramped. I love your new arrangement.

It is good to begin to get back to normal after the terrible weather. I never change the furniture around. In fact when I repaint a room I always end up choosing the same colours. What a bore I am.

I like to change furniture around as well and the change looks good in your living room.
I see the cats are gorgeous and keeping you both happy.
I love big cats and these are beautiful cats and probably spoiled rotten. lol
They look very happy.:)

It's fun to change things up. Glad it's working for you. Have a great weekend!

My husband doesn't like the furniture to change around too much, but every now and then a good idea is too hard to resist.

We had record rainfalls here wed. with some roads flooded. Not fun!

"Laying around like an old Roman". Hahahaha, you crack me up! Glad he can finally get his leg support up and get comfy.

The pictures from one day to the next is amazing. Such a change in the weather.

It's amazing how making a simple adjustment can change everything about a room.
Your weather certainly has been crazy this winter! I hope you continue to stay warm and dry.

I move the furniture around when I need a change, too. It isn't safe to walk around here at night without turning the lights on.

REally a cool idea about the tables, the living room has much more space with your changes! :)
By the way, I LOVE the red wall!
hugs
Léia