In 1963 when I was 20 I worked for a company in Brussels which made magnetic colorful letters. Each year they exposed in Nürnberg at a worldwide famous toy fair in Germany. 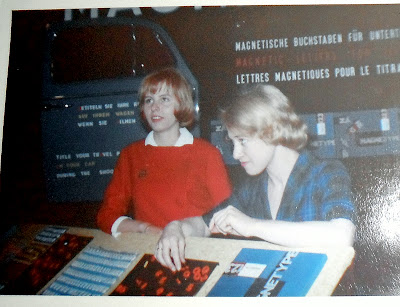 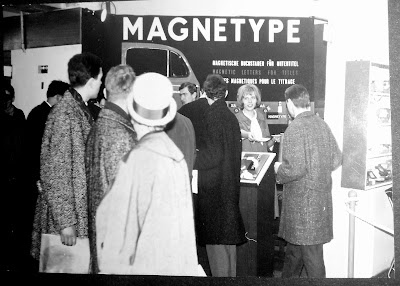 My job was to translate into French and to look cute and friendly and keep the stand where our products were shown. I was alone and hungry, it was around noon, my boss and another coworker had gone for lunch, but the hall was still packed with people. I took my sandwich out of my bag and put it on the floor so that nobody could see it and from time to time I looked around,  bent down and took a bite.

A few stands further I heard people laughing and laughing and told myself that they must show something very funny and that's why probably I had nobody at our stand.

Then I noticed that one of my nylon stockings was loose (there were no panties yet) and had to be fixed to the garters. As only my top could be seen,  I pulled up my skirt and fixed the clip. Another bout of loud laughter. I became curious and as my stocking was fixed I walked over there to have a look and to find out why people were laughing so much and evidently were very amused.

When I approached the laughter even increased and I didn't understand a thing. And then I saw what happened ! The exposed object was a video camera (very rare at that time) directed right to my stand and you could even see what happened behind the counter ! Now I understood why there was so much laughter, everybody had seen me eating under the counter and also my legs while I fixed my stocking !

What should I do ? getting a red face and look ashamed or laughing ? I preferred to laugh with them ! 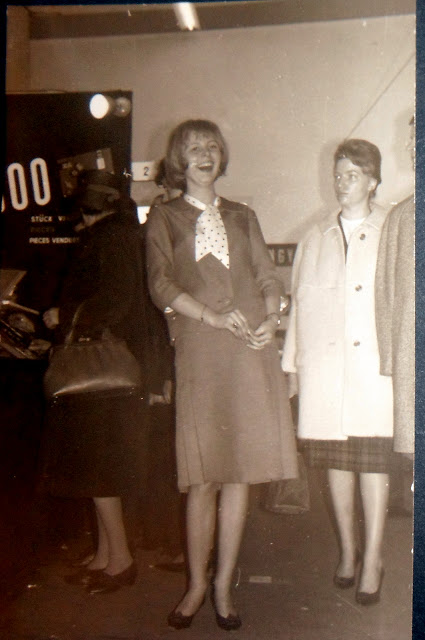 A great story from the past. I'm glad you have such a sense of humour.

That is so much you! :)
God bless you!
Cezar

Hi Gattina .. absolutely the right attitude to have - I'm not sure what I would have done .... probably run!

Interesting to read your memories though .. cheers Hilary

hahaha That was funny although not a very nice thing for them to do behind your back.
You look like Nicole Kidman in this picture Very nice :)

I'm glad you saw the funny side of it:-)

This is sooo funny, do you still blush remembering it?

I have to admire you for laughing at yourself. Great story and you still have the photos. Remarkable.

That was funny. You did a great job of looking cute :)

That is so funny, you look so very nice I'm sure you would have got away with anything.
Why is the woman next to you looking so sour?

That's the spirit ! I love your story Gattina and thank you for visiting pret-a-vivre

you are so beautiful -- especially the laughing

Oh, that is so funny! I would have been mortified.