MY FIGHT WITH KEYS

Keys are my enemies ! They make me loose time, because I am always looking for them. Of course I always put them on the same place, the trouble is, the places change, not the key ! You wouldn't think that you can loose a car key when you are in your garage you had switched off the engine and climbed out of the car. But the next time I wanted to take my car they had disappeared. Usually I always put them besides my seat, there is a little place to put small things. Of course no keys there.

After having looked under the seats and everywhere in the car, I finally took my spare keys. When I came home I emptied my purse, turned it upside down, shook it, but besides some crumbs nothing fell out. A week went by, without finding the key, which must be somewhere in the house, but where ? One day I found it in my purse in a little side pocket closed with a zip ! Of course it couldn't fall out.

And this is only one example of uncountable key searches in my life. 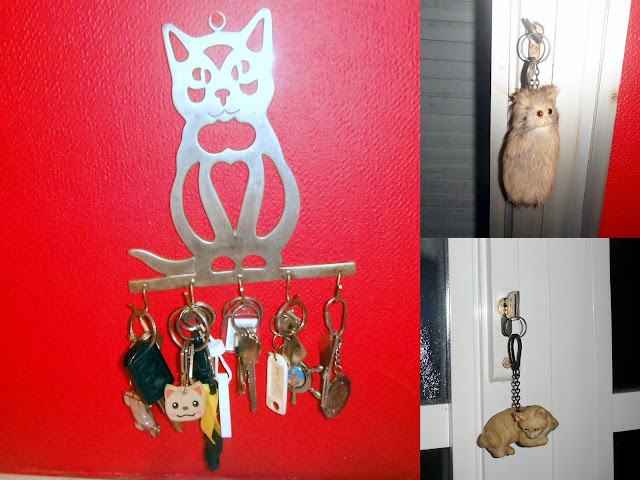 Despite my key "wars" we keep the keys of our next neighbor's, 4 houses in total. I am not alone, because they too, forget their keys and then come over to pick up the spare keys. It often happens with the 17 year old son, who leaves them inside or looses them, and Dominique is a champion in key forgetting too.
So I am not the only one.

Now I wanted to know who had invented the key which causes me so much troubles ! And I found out that the first key and lock were made out of wood some 4,000 years ago;  !! That means for 4000 years people were loosing their keys !  However it is unclear which civilization was the first to invent them. Probably they want to stay anonymous !

The first all-metal lock appeared between the years 870 and 900, and are attributed to the English craftsmen. It is also said that the key was invented by Theodore of Samos in the 6th century BC. I wished that Theodore had never been born !

In Ancient Rome, having keys—or anything worth locking up—was uncommon. So the key was as much a status symbol as a security device. Affluent Romans often kept their valuables in secure boxes within their households, and wore the keys as rings on their fingers. The practice had two benefits: It kept the key handy at all times, while signaling that the wearer was wealthy and important enough to have money and jewelry worth securing. A pity that times have changed. Now you have to lock your house like a door in Fort Knox. I never thought that a key could be a social status symbol ! These Romans !
Posted by Gattina at 06:00

So we can blame the Romans for all this torment!
I have a lock box with spare keys inside, including a car key, outside my house. Told family friends and neighbour the secret code, messed it up once when I didn't close it with the right code. Now I have 2 lock boxes because I can't open the first one to remove it.
It would be so much easier to put a spare key under the front door mat.

Those romans were ingenious. I have a high shelf with cubby holes in one has a basket and keys get flung in there. I lose them when I come in with hands full and keys between teeth thats when i have a problem .

Enjoying a lot your story today! :)
At least Keys aren't a kind of problem for me because I usually forget many other things!
hugs
Léia

I am OCD when it comes to my car keys. I have such a fear of locking them in my car, that I will check for them in my purse several times before closing the car door!

I keep everything cause I know they are safe with me.
My keys are always in my pocket but when my guys take them then its a lost cause. We are always looking for them.
Too bad there is a need. Today they have computer locks but once you begin to have problems they are costly to fix.
Best to keep the old fashioned key.

Beautiful key chains for your keys and great post for K ~

Carol of A Creative Harbor ^_^

I have one of those magnetic things under my truck and I keep copies of all of my keys there. I know it isn't completely safe, but it has saved my cookies more than once!

Lol those Romans indeed :) I too am always looking for my keys, especially my car keys. They always seem to disappear. Maybe I should hang them around my neck.

I knew it was somebody else's fault! Nice to know who to blame it on -- those Romans. A good and funny post. Good thing you had a spare set that time.

I can relate to this as well. My keys are growing legs like mad!

I did a key post as well. We have TOO many keys to keep up with! I have a thing about keeping up with my keys, because my husband had a history of misplacing them!

I find myself wanting to hyper-ventilate.

Thanks for a kool link.