Helps you to remember what you have done on the weekend of January 27. If you participate please put the little logo on the top of your post and leave your link.

On Saturday morning it started to snow again which made me very upset, I thought we are again prisoners of the house ! Fortunately it didn't last long and we could cross the street without any problems 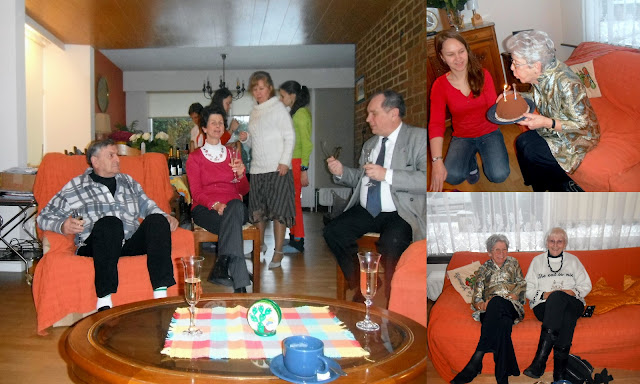 to celebrate my neighbor's birthday ! She was the first one I knew here in our street when we moved in  38 years ago ! On the pictures you can see Mr. G with Dominique and my neighbor's eldest daughter. Her grand daughter served the birthday cake, which was delicious it was a cake called "chocolate bomb" and I swear it really was a bomb ! I couldn't eat supper and even Mr. G. who usually eats like a horse, after two slices had more then enough ! It was real nice we talked about old memories and the neighbors who moved or passed away and had a lot of fun.

Sunday morning it was a disaster ! It was raining cats and dogs and a strong wind blow. The temperature had raised and the snow was melting. I heard "thunder" rumbling on our roof, when the snow in big pieces slipped away. 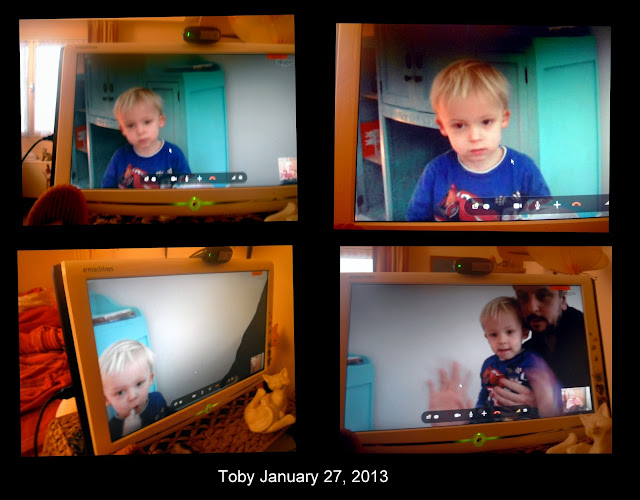 Then we had a call from Toby who said quickly hello before he returned to his very important occupations, he was faking to make  tea in his little kitchen and served it in a little cup. I got one too, through the screen ! Then he waved good bye. The tea was very good !

Meanwhile it had stopped raining and all the snow was gone ! It had happened so quickly ! I had promised Ilona to come helping her with some computer questions, and I had thought I couldn't make it because of glaze. Instead the streets were clean and the sun even  appeared  for two seconds. We also talked about doing a nice trip together to celebrate our 70th birthday. She is my only friend who has the same age. My other friends are much younger. Making holiday plans are always fun ! We are thinking about a round trip through the UK, from London up to Edinbourg and then over Wales down to Bath and Stonehenge. Now I have to gather all informations. It's not sure yet, but we are both dreaming already !

In the evening I "prepared" supper Tagliatelle with salmon and zucchinis in a delicious sauce. It was a terrible work, I had to put it in the microwave and push the bottom ! On the picture it's still frozen because I forgot to take one when it was warmed up ! 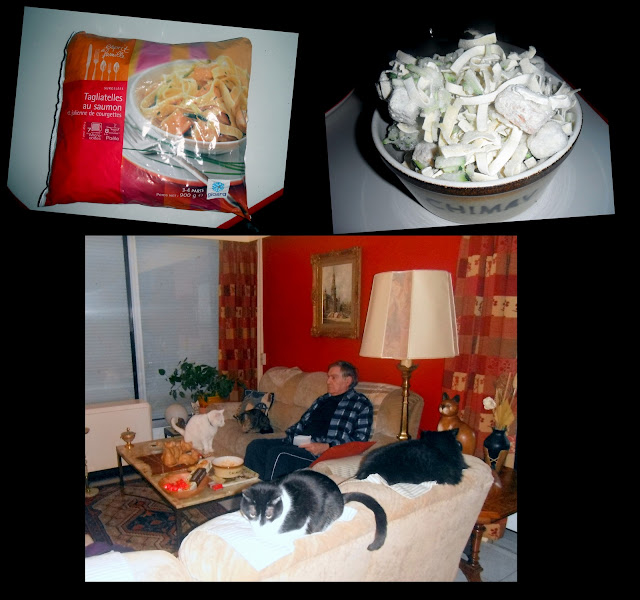 It was so good that Mr. G. was surrounded by our cats, especially Arthur of course who always has to put his nose in the plates !

Labels: birthday party, snow, What did you do this weekend ?

A round trip through the UK to celebrate a 70th birthday sounds perfect.
Pleased to see Kim joining the gang of four to share Mr G'S food.

Ah how I wish I had a chocolate bomb even this early on a Monday morning! Sounds wonderful and your party looked good. Happy birthday to your neighbor. you're so lucky to live all those years in one place with all their memories. I love that you had tea with dear little Toby! And the tagliatelle is a complicated dish, hey? Lol! Arthur and Shadow are so alike. Shadow is in the kitchen when I work there (which is seldom, Grant eats at the GH and I just micro-wave pasta for my lunch!)and then his nose is in everything. Also when Grant eats cheese and crackers (biscuits), Shadow and Ambrose are into the plates! Mmm Not for people who don't like cats to be "in your face" OMW is it your 70th this year? I thought only next! Happy holiday planning. Have a great week. Jo

That is nice to be friends for so long. Toby is growing up into a handsome lad. Fox only says hello and a short conversation and then he's off to play and returns to say goodbye. So the big 70 this year. Hope you do something special. The trip sounds a good idea.

I was not feeling well (still not) and slept most of the weekend. I didn't do a what I did this weekend, because it was very boring. How can sleeping be exciting? So today, I put on a questionnaire about me to see who knows me.

So good to see Mr G up and about celebrating life.
Usually he sits at home. :)
We went out as well but it's hard to compete with young people. My son is always out doing things and using the car.lol

Our daughter and her fiance came to spend the weekend with us which was very welcome. Thankyou for your recent comments on News From Italy. I owe you an explanation as I do not think you have seen the message in my sidebar. Please forgive me for being less than attentive with my visits to your blogs but time for computing and blogging is at a premium at the moment as my husband is unwell.

Keep on planning. I think a round trip of the UK would be a wonderful idea.