Helps you to remember what you have done on the weekend of December 15. If you participate please put the little logo on the top of your post and leave your link.


On Saturday Dominique and I went to meet at Nicole's to look at our holiday pictures together. The city center was packed with cars so I took little side streets with less traffic. Arriving at a roundabout, I missed a street and as I thought nobody was behind me I drove backwards and "boomm" a car behind me banged into mine ! We got all out of the cars and looked at the damages, but fortunately the cars were solid and nothing was damaged. But the poor young girl who had bumbed into my car, was so excited that she started to cry although there was nothing, with the result that Dominique took her into her arms patted her back and comforted her !

Then we got back into our cars, I drove again around the roundabout and took the right street. Suddenly I saw the car before mine driving backwards I tried to horn, but "boomm" again and this time into the front of my car. Got out a middle aged man, we checked our cars, and again we were lucky there was  really nothing ! But he insisted to fill in the insurance formular, because he had a full covered car insurance and as he had some little damages from a previous accident he wanted his insurance to pay ! I didn't agree, because I had nothing and Dominique always practically, wetted her fingers and cleaned off two  scratches ! When the guy realized that I didn't want to get involved into a insurance fraud, he gave up, smiled and drove away ! No wonder that car insurances become more and more expensive !

With half an hour late, we finally arrived at Nicole's and as the first shock was gone, we all bursted out in laughter ! 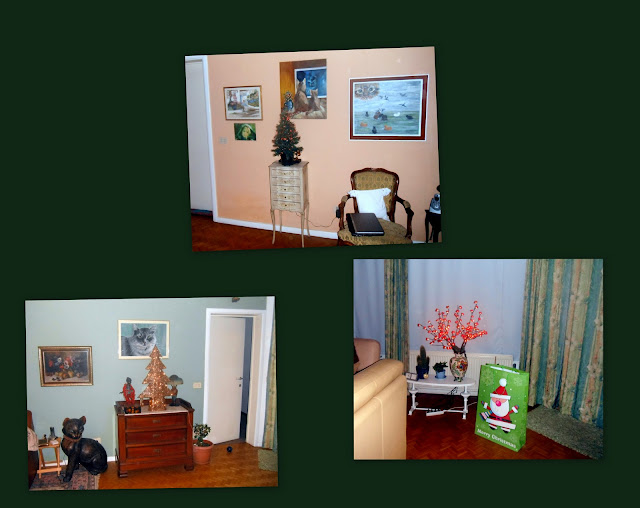 Her flat was already nicely decorated for Christmas and looked very festive. I put the USB stick into her computer and we lived our holidays again with a lot of fun, a good cake and coffee !
What an adventure !

On Sunday morning I told Mr. G that we could quickly do our Christmas tree and the decoration. The "quickly" started at 11 am and was almost finished at 5 pm, when I really had enough !

First he draged groaning cartons and a suitcase from the basement to the living room, where I stated that I had Christmas decoration to fill in a shop !

Firs we put the 3 parts of the tree together and unfolded the branches, Arthur slept, he likes when people work. Then I looked into the cartons and the suitcase and took out balls, angels, nativity scenes etc and scattered them all over the floor. Mr. G. took the opportunity to stumble over angels and Father Christmases and balls and was not at all happy about it.  Meanwhile the tree was up and we started with the lights. If you want to learn swearing in Italian, this was the moment ! When the lights were nicely put around the tree I added the balls and other decorations. When I hang up one single red ball, the whole tree fell on the sofa and Mr. G. enlarged his vocabulary. Then he fixed the tree again in the hope it won't fall down if you look at it too severely.

Finally it was ready, I hang the lametta around the balls and put the nativity scene and some angels under the tree ! Meanwhile it was 4 pm !

Then came the rest of the decoration, the mantle piece, the table and the cupboard. There was a lot of things left and we put everything back into the suitcase, which Mr. G. groaning again, carried down to the basement.

Arthur was exhausted from watching us !

Then we fell both in the sofas, and decided that for today it was enough ! The evening we spent with Inspector Barnaby and helped him solve the crime of four murders. Christmas time has started in our house !

Labels: car accident, Christmas decoration, humor, What did you do this weekend ?

lol Poor Mr G. You torture him with the holiday spirit and all he wants is to be like Arthur,Patted and scratched behind the ears.lol

Oh, what a night I had last night. My nephews wife was just terrible to me. You know, I do not believe people have to agree on everything, but then she made fun of the fact that I had lost a child, and well, I lost it! So did Amanda. It was beyond cruel. I did not write about it on the blog, but will be writing a little about it tomorrow, as the dear girl un-friended me on Facebook. She is an ITCH with a B!

Leave It To Davis said...

I'll bet Arthur was worrying the entire time you were decorating! I remember when we had cats how they noticed every little thing that was different. Dogs are so different. They just come in and wag their tail and want you to pet them and look at you with a "I'm dumb but love me" look. lol Cats are so much smarter. That's why Arthur was so tired. You made him think too much with all that changing around. :)