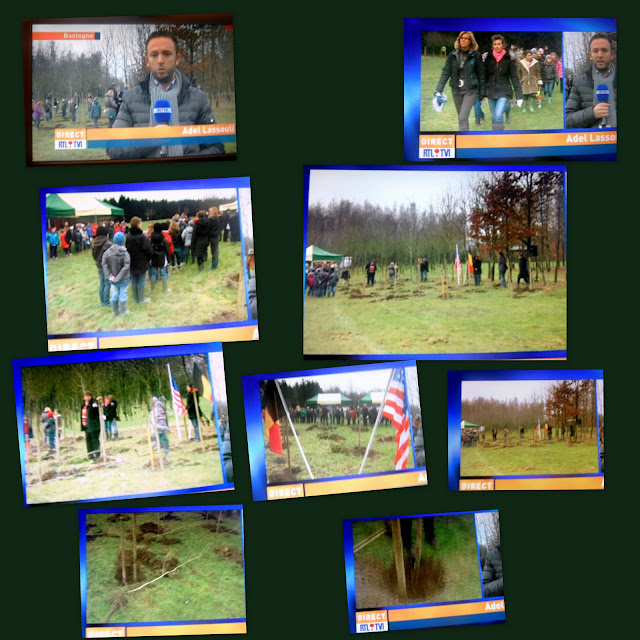 1. The city of Bastogne, paid a special tribute to the victims of Tuesday's shooting  in Newtown. It was an initiative of the mayor of the municipality as Bastogne maintains close relations with the United States since World War II, because so many American and Canadian soldiers died there.

26 oak trees on behalf of the 26 victims of the massacre were planted by school children of different schools in the "Bois de la Paix". The place was made in Bastogne for the 50th anniversary of the Battle of the Bulge. It was so sad to see the children who planted the 26 oak trees and who manifested their sadness about the little American children..

2.  Mr. G. was not lucky his car battery gave up it's soul and he just charged it a little with the help of my car to be able to go to the Opel garage, where he got a new battery. Nice Christmas gift and a hole in the wallet ! 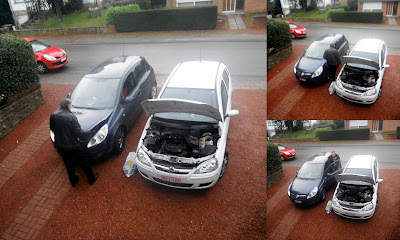 3. Since my return from Egypt I badly needed to go to the hairdresser, because I looked like a witch without broom. 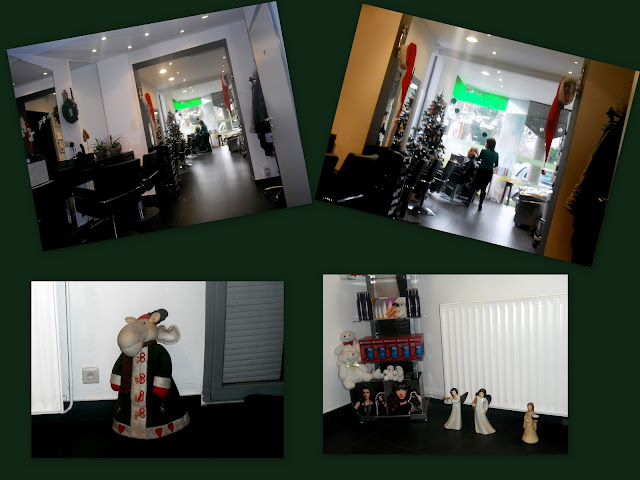 the beauty salon was nicely decorated and while my hair was washed I had a nice view on the angels and the moose !

4.  Each year Waterloo city invites the senior citizens for a Christmas party in the city hall. This time a Russian group would give a concert with Russian christmas songs. I went there with my neighbor, thinking that Russian Christmas songs are certainly very nice. 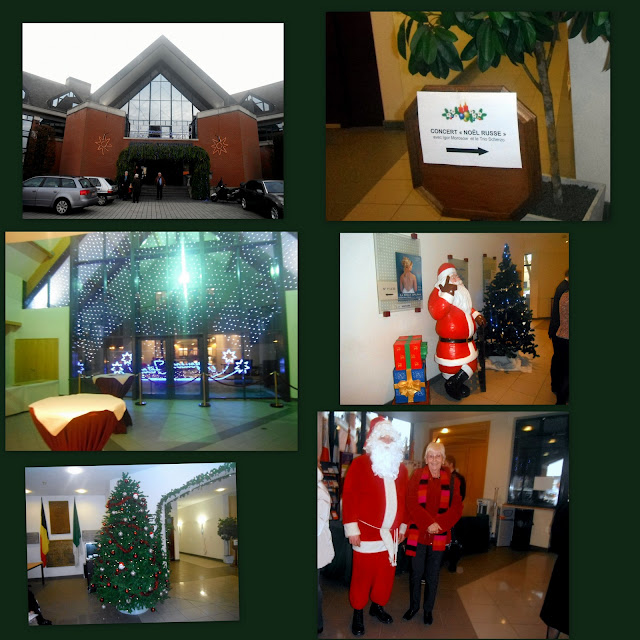 We were greated by the major and other "important" people, I prefered to pose with Father Christmas ! He looked the best ! 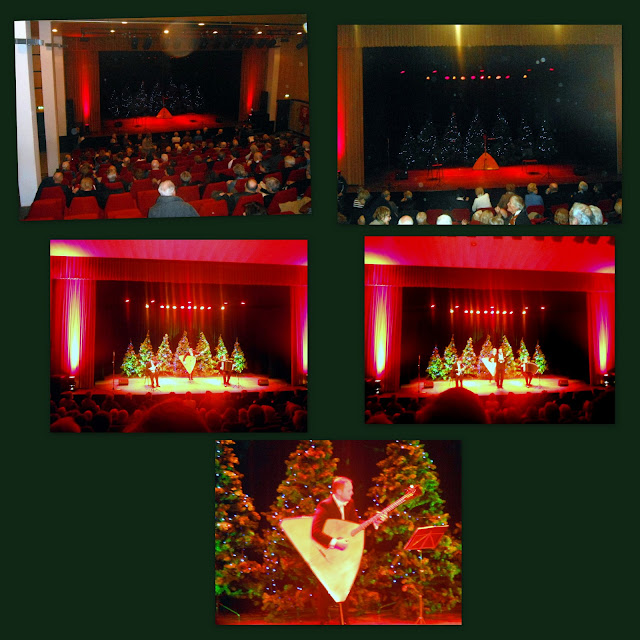 The concert was very disappointing, there were three guys playing Russian instruments (besides the accordion). The bariton singer had a beautiful voice but sang all kinds of songs which had nothing to do with Christmas, like the "Figaro" etc. The only Christmas song he sang was the German version of "Silent Night" !

After the concert we all were invited for a glass of "Champagne" and cookies and as Christmas gift we got a very dry brioche with a little marzipan Jesus, and two Belgian chocolates. I don't know if they had a contract with the dentist, or if the brioches were from last year, they were not eatable unless you want to loose your teeth. Sign of the economical crisis ... start to save money with the seniors.

5. Much better was the Christmas party of our painting class ! One "girl" had prepared herself this wonderful filled bread. We call it "pain surprise" which means "bread with surprise". 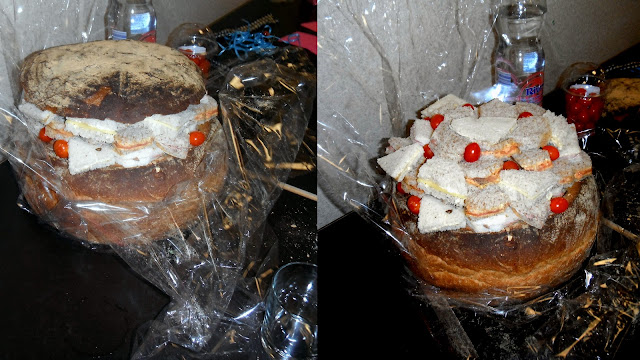 The brave girl had got up at 6 am emptied the bread and made little sandwiches of all kinds, cheese, salami, ham, smoked salmon etc. It was delicious 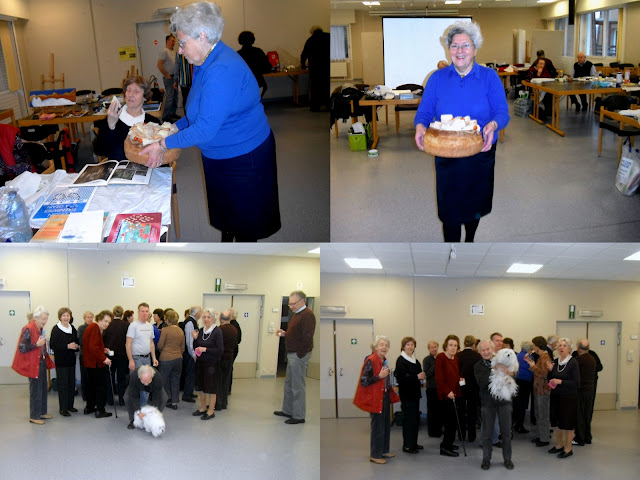 We all enjoyed the sandwiches and the Champagne which was served with it. The always present doggie Shania, was hoping for sandwiches too, but prefered water to the champagne !
Posted by Gattina at 06:00

That was a shame, it would have been nice to hear Russian Christmas songs. I am sure they have them! Perhaps they were inspired by the beautiful Christmas tree on Grande Place!

That was a shame. Usually they sing beautiful hymns this time of year.
And the food disaster! Wow That would disappoint me too.
I love the church choir they have when they do Sunday mass.
The orthodox ceremonies are quite beautiful especially at Easter.

That is one big lute(?). Like and oddly shaped bass.

I can't even find my link, let alone fix it. Ah well. I'll try to have a new Photohunt up tonigh.

I prefer your painting class' party. The 'pain surprise' sounds yummy although at first I thought it meant painful to eat. LOL

What a very nice thing of the mayor and school children to do to remember the children in the U.S.

Love the presentation of the sandwiches in the bread. Very creative and looks delicious. Merry Christmas to you and Mr. G.

What a lovely tribute from the schoolchildren.

Odd to have a Christmas concert with no Christmas songs!

Thanks for sharing that story about the 26 trees. That warmed my heart.

I enjoyed your humor tonight, too.

Hard breads and cookies at Christmas....Perhaps you can save the marzipan Jesus for the king's cake when Mardi Gras rolls around!

I hope you had a marvelous Christmas.