When I was a little girl of about 10 in 1953,   I was invited by a friend to stay over night in her home, what little girls always love to do. During the night I had to go to the bathroom. I switched on the light and the first thing I saw was an eye laying in a glass filled with water and starring at me. After the first shock I approached and took a closer look. It was of a grey blue. Of course I had never seen an eye alone in a glass but only in faces. I wondered if I could take out my eye too, but that didn't work. It was a fake eye made of glass. The eye made me more and more curious and I decided to take it out to have a closer look. 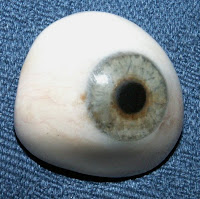 It was round like a marble and on the other side completely white. I found it funny. I took the eye and put it besides mine just to compare. Besides my brown green eye I had now a blue one. Then I put the eye between mine and the mirror showed me that I looked like a monster of the greek mythology. I rolled the eye in my hands and let it drop from one hand the other. I liked this eye it seemed to smile at me.

Finally I had enough played with the eye and put it back in the glass and returned to my bed. The next morning when I went to the bathroom the eye had disappeared. At the breakfast table I looked at my friends dad's eyes, yes it was exactly the same color ! It must be his ! But how did he put it in his face ? That was a mistery to me. I had tried to wear the eye but it hadn't worked ! I must have starred at the poor man because suddenly he asked me if I had seen his eye in the bathroom. I was quite embarrassed but said yes and then he told me that it was a prosthesis because he had lost one eye during WW II (and not only that, but also part of an arm and all fingers on the other hand).

As at this time there were so many men with something missing like an arm a leg or both I found that completely normal. I found it even funny, that my friend's Dad could take his out, that was really special ! The fact that he couldn't see with this eye, came never into my mind.  My father had his two eyes and he couldn't take them out. I was almost jalous.

Wow! I have never seen one before.

How brave you were at 10, I would never have been able to touch it, not sure I could even now, at this ripe old age!

What a neat story!

I knew a young man in my youth that had a "glass eye" due to an explosion. He lost it while swimming in the river at a summer camp. His uncle was a man of great faith, and had us all pray together that he would find the eye in the river. I never would have thought it would be possible, but he did! Miracles do happen!

what a cool story. no wonder the moment stuck with you.

It's so neat the way you remember and write so well about childhood experiences...this was funny, but poignant too.

Wow, that is quite a story. Isn't it interesting how children can take things so calmly?

Loved this little slice of your life.

What a great story, Gattina. I can just imagine you as a child!
K

The poor man to have lost so many parts. Could he pick up the eye on his own?

What an interesting story.
We've recently dissected a pig's eye, to look at the various parts.

There is a another post on Alphabe-Thursday about eyes, and dissecting eyes.

Thanks for your comments on my posts, Gattina!

Although, I'm intriqued with a lot of the old glass ones. I'm not sure if it would be too creepy to collect them into a large glass jar and put them on the coffee table!

It would have been hard not to stare at that eyeball!

I really liked this little story. It made me smile! And smiling is always excellent.

Especially on the first day of the New Year!

Hope yours is starting out great!

And thanks for linking.