I just did a study about summer ! Because I am sitting here with the heating on and outside it's grey and cold. Officially it should be the warmest season of the year, between spring and autumn. In the Northern Hemisphere, where I live it is usually defined as the period between the summer solstice (year’s longest day), June 21 or 22, and the autumnal equinox (day and night equal in length), September 22 or 23.

I don't know who invented this, but anyway it is not true in practical life and this since years !
But as I have to adapt to the clima, official summer or not, instead of wearing shorts and T-shirts I am hanging around in a thick sweater and jeans and instead of sandals I wear warm slippers.

Instead of laying in my garden and enjoy the warm sunshine of end summer with a good book, or "working" at my computer on the terrace, I sit inside and enjoy the heating and watch crime stories on TV. My favorite series is "Midsummer murders" with Inspector Barnaby. Midsummer is a place in England where in each film at least 4 people are murdered in average. I wonder if there are still inhabitants. At least the place has the word "summer" in it.

Another series I love to watch is "Morse" who loves classical music to solve crimes which puts me in a funeral mood. He drinks a lot, but that's understandable, because in Oxford it rains a lot too.

Although "Global warming" has been changed into "Climate changes" and won't warm me up anymore, I still have hope that summer comes back, maybe on Christmas, because it wouldn't be the first time that we had temperatures around 15°C (59F) or even more just like now in summer. 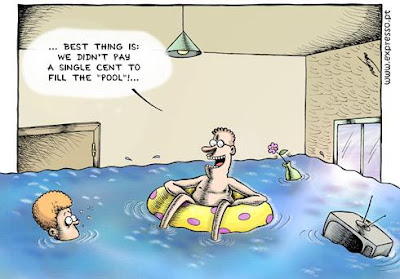 I certainly can say that for next week !
Posted by Gattina at 06:00

ROFLMAO!! This just cracked me up. I can so picture you with that sweater on watching thrillers with the cats wondering why in the hell it's so cold out all of a sudden. And it's still summer ROFLMAO!!! Too funny :) Have a great Sunday...59...Crap I'd be in a parka LOL

No heating needed here! And I live a lot further North (grin). Temperatures this week returned to 20+C.(68-72F) It's windy, but not cold and the strong winds are making a mess of the roses.
It doesn't get cold enough to put heating on until the end of October.

You know all the hullabaloo about the Hurricane up here in New Hampshire? Well, we didn't have ONE drop of rain! And hardly any wind either!

We live in the tropics so it's hot, hot, hot all the way with sudden heavy thunderstorms!
Wonder which is better, your place or mine? LOL!

It's hard to believe that Autumn is just around the corner! I have yet to reach for my sweater but I know it's not too far off. Love the cartoon. Thank you so much for stopping by my blog. Have a great week.
An English Girl Rambles

Sorry you're freezing over there, we're still broiling hot here, I only turned off the air conditioning at 20:30 today! We should have at least another month or two of hot weather, and it's not likely to really rain before November or December. We do have dreary wet winters, though with our temperatures what feels like winter to us you'd probably call spring ;).

By the way, we're going to be spending the day in Antwerp later this month (taking the kids to the aquarium and a bit of sightseeing on the way to friends in Holland). Do you have any idea how driving in the city center is? Is it horribly crowded or can we easily come in by car?

These cool temps are really very unusual for September. I remember them often when I was a child - being able to actually WEAR new fall clothes to return to school -- but in recent years, children have to return to school in their old SUMMER clothes! THIS year though is different. Not cold - but not horribly HOT either!

Your cartoon looks like our Christchurch. except the man won't be smiling.

How many computers have you got to have all those wiring? LOL