A WHITE DEVIL IN THE BASEMENT 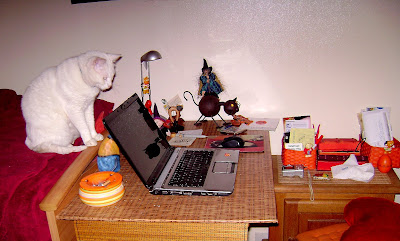 I present you Arthur, I mean to those who don't know him yet.

My neighbor Victor loves his open fire especially in automn and spring when the evenings are cool. Last week he went to his basement where he keeps his logs near the heating. Something terrible happened to him which caused him almost a heart attack.

When he had moved one log, suddenly a white devil jumped out and over the stack direction window. Victor screamed dropped his basket and gasped. Then he turned around and what did he see : Cat Arthur sitting on the window sill washing himself from top to bottom, tail included.

Victor still holding his hand against his chest had to laugh and he told Arthur that one day he would really kill him.

Useless to say that cat Arthur and Victor are friends. Arthur the crooner is the darling of the whole neighborhood. 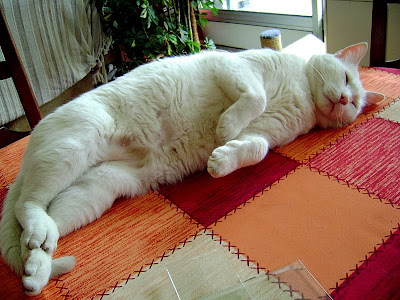 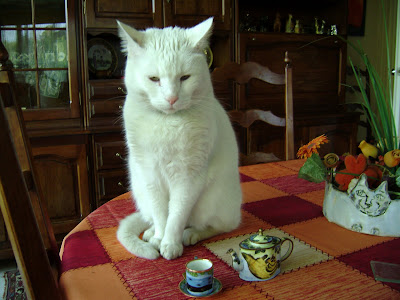 Here is more about Arthur.
Posted by Gattina at 06:38

Every story has two sides, well...this is Arthur's side of the story.... :D

Arthur:
...now I'm not scared of Victor and in fact I wanted to go and say hello, but as I walked closer to him he went absolutely berserk. Screaming and jumping up trying to get through a door window. I just sat and watched....

Then my mom came rushing out calling my name, I think she thought I was in trouble but I just sat and looked at her. She picked me up and took me into the house and then she tried to explain things to Victor who by this time was going completely bonkers....thinking he saw a white devil! What a commotion and in the evening too, I think it really frightened my mum as she looked really shocked and worried....

Just to let you know, I had a comment of yours go into the spam folder. This is something that should resolve itself over time but thought you might appreciate being made aware. If I'm talking double dutch then let me know and I'll explain further.

ot a big cat person but I believe that one would be my friend.

I just published my Smiley Saturday at Small Reflections and when I added the link at Lightening’s … I noticed your name in the Mr. Linky so I popped on over. Arthur seems like a ‘character’ … the photos are wonderful and methinks I’ll return to read more about him as time permits (I’ve bookmarked this link for future reference), but I’ve got a busy day ahead with minimal time to create my post for Sacred Ruminations before I head out. Hope you have a lovely weekend.
Hugs and blessings,

Oh dear, Arthur...just be careful where you go to sleep in future. Go into someone else's place and they don't know you're there could have dire consequences...poor Victor. Still, it's good he and you are still friends.

LOL! I have a feeling my neighbors are NOT so fond of cat Freedom! She's my only outdoor cat - and she is a nuisance! Arthur is a sweetie! You can tell just to look at him!

Gday Gattina..
Poor Victor to get such a fright,, He wasnt expecting to see Arther jump out,, Ohhh poor Man...

Hey Gattina, I've book tagged you on my site! Visit when you have a chance! Happy Saturday. :)

Came across your blog for the first time.. I like the energy here!
:-0)

Oh my goodness! Arthur really gets into Halloween, doesn't he? But it's a bit early for trick or treat (though Arther seems mostly into tricks).

Arthur is such a sociable cat, He really knows how to socialize! *giggles*

My sis cat once did the same with her hubby, jumping up from an empty paper bag when he lifted it, without knowing the cat was there. I saw it, too funny! *giggles*

Since you're interested in Art, I have something in my Sunday post that's very itneresting and more is to come!

I hope I make you curious... *giggles*

That is one cute cat! I like the first picture.. it makes me wonder if he's considering taking up blogging!

What a beautiful kitty! I just love cats!