More participants here at Ur Olive

I don't like fishing at all ! at least not for fishes. Sitting there with a Angel in your hand and starring in the water until a tiny fish finally eats the poor worm, I really cannot call a sport. And fishing with nets is even worse because there are so many other poor creatures captured too. I recognize it is necessary for us to eat fish sometimes at least, so I better don't think about how it was catched.

Besides this kind of fishing, I never fished for compliments, but I did twice a nice catch with my personal net. The first fish I catched became rotten after a while so I had to throw it in the garbadge or I would have gotten an indigestion. The second catch was a success ! I still have this fish in my acquarium now, I couldn't eat it because I felt in love with it. So I gave up fishing completely until this day. 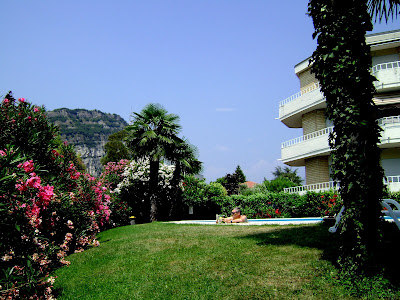 My personal fish in its acquarium
Posted by Gattina at 08:39

Gotta love your goldfish... :)
My hols are over, now I am doing laundry and catching up.
Enjoy your vacation!!

hehehe love the fish you caught Mr Gattina looks so relaxed in the pool..Happy birthday for the 8th Gattina

I guess that means you don't eat fish?? it is very good for you, unless its the rotten kind.

It never ocurred to me to make a pet of a fish you had caught! Good for you!

Hi again Gattina ~~ I neither go fishing or eat fish myself. I changed the date of your birthday to the 8th. Hope you have a terrific day and soon be home. Take care, Love, Merle.

LOL! The Gattino-fish! An excellent capture, I here!

ahahahah :) i thought, wow, what kind of fish is that that could live such a loooooonnnnnngggg time.. now i know :) what a great fish you've caught. as always you are always funny and witty, gattina :)