A LITTLE STORY OF MY CHILDHOOD

of course I mean heat !


Last week for Fun Monday we were asked to write a funny story which happened when we were children. I wrote "A BAD WORD" which involves the post war life in Germany you can read it here where I spent my childhood. Some people asked me if I had more stories about this time. I didn't. So today I will tell you another little part of my childhood and believe me when you are a little child you don't realize what really happened but you only see the funny side of it.

For me as a child it was completely normal that all fathers (except mine) teachers or other men around me had something missing. A leg, fingers, a hand, an arm, an eye, sometimes both legs and I only realized that it was not so normal as it seemed to me when for the first time I went to the Belgian coast and saw men there at the beach. It seemed very strange to me that they had all their members and nothing was missing. I was 13 at that time and it was one year before we moved to Brussels.

I remember that once I was spending a night in one of my friends home. I entered the bathroom in the morning and saw an eye starring at me in a waterglass. I was a little surprised but very curious. So I took the eye out of the glass to have a closer look. I compared it to my marbles I had at home. I also found it very funny that the eye seemed to look at me. When I had seen enough I put it back in the glass. In fact it was my friend's father's glass eye. When I returned to the bathroom later the eye had disappeared and a normal friendly man said good morning to me. Of course after that I always starred at his eyes when I thought he would not see me. I found it so exciting that he could take his eye off and I could not.

At another's friends place where I also stayed over night, I opened a wardrobe to look for something I don't remember and suddenly found myself with one leg protheses in my arms. It almost kicked me down I must have been 8 or 9. My friend helped me to put it back and told me that over night her father always put it there and walked with crutches at home. I hadn't even noticed. These things were just part of my daily life.

I only understood many many years later that it hadn't been normal at all. 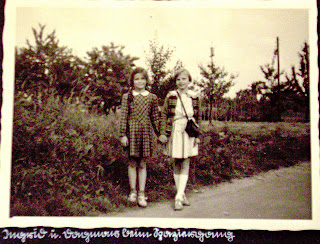 My best friend and me, we are still friends today. As you can see my mother still wrote in gothic, which was used in Germany. I have two albums where she wrote what was on the pictures but I can't read it ! This way of writing had been forbidden in 1945 by the occupants, because they couldn't read it either ! I remember my grandma who was furious because she had to learn a new writing and when later I got letters from her they still contained some of gothic letters.

You were not frightened by the glass eye. I probably would. hehe....

Wow! That is a friendship that lasts a lifetime.

learn some very interesting things. For instance, the forbidden language.
This is the first I've ever heard about that.

I hope it has been recovered.

It's a lot of things we learn to accept as a kid, that we realize later in life may not be so normal. What ever normal is. That was normal at your childhood.

I don't remember ever hearing about that forbidden language either. How interesting. It does look very nice written though, calligraphic which is very beautiful.

Look like you are already in Christmas mood. Nice blog you have. The red header on top is just hot enough. And, I just finished your amusing stories which is also quite shocking but touching too for me.

I suddenly feel, life is so precious.
Have a nice weekend!

Thanks for letting me know about this story. Very interesting how something that is not normal, was normal for you.

I've never heard of Gothic writing. Maybe one day you could explain what it is and your experience with it.

Great entry for the week. I learned something too. Have a great week ahead :)

The glass eye would've terrified me. And, how sad that most of the men were missing something. A daily reminder of the life before the war.