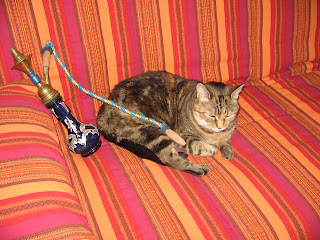 Pookie tries a turkish water pipe
When we stopped in Istambul for two days our guide took us to the famous Bazar. It contains about 4000 little shops of all kind and also Restaurants and Cafés. It is located in a huge hall.

When we arrived our guide explained to us that there were 4 entrances and that we had 2 h to walk around. My flemish companions saw this with worried faces. Alone for 2 h ?? and what if they didn't find the exit where the entrance was ? The guide asked them to note the entrance/exit name on a piece of paper so that they could ask how to get out in case they were lost. For me it was easy because there was written "Leather & Furs" in english and in turkish beneath. I entered the bazar and left the others to their destiny. 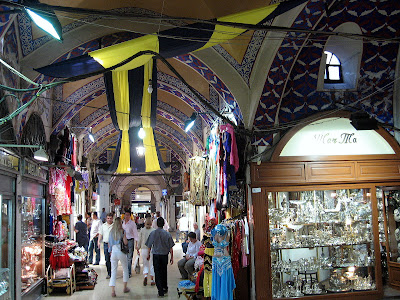 The ceilings and all decoration were just beautiful 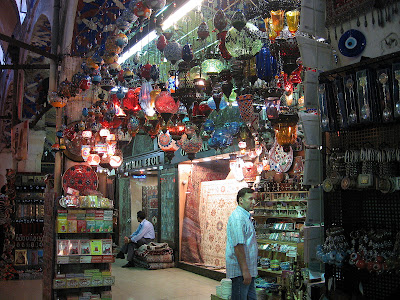 there was nothing what you couldn't buy, cupper, ceramic, onyx, clothes, leather coats, jackets, souvenirs and jewelery etc. 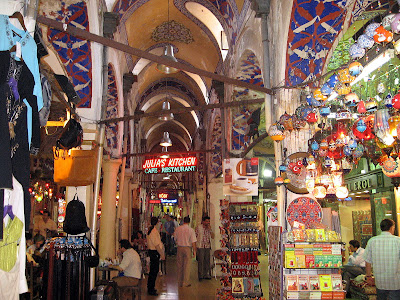 in short, a real bazar ! 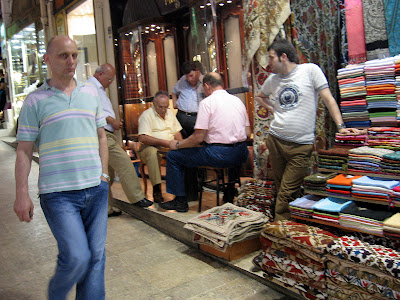 Men were playing Black Gammon or something similar while waiting for customers.

At each shop somebody stood outside and praised his good prices and wanted you to come into his shop. Sometimes it was quite unnerving. They also asked every Tourist "Where are you coming from" and I thought I better should put a sign on my back with "I come from Belgium".

But I enjoyed very much walking and looking around until suddenly I heard two high screaming hysterical voices. In front of me in the middle of a crossing stood the two old sisters and screamed excited at each other waving around with their handbags. It looked quite funny and the people around found that too because a cercle had been formed around them.

I approached to see what happened and understood that they were lost and were nearly ready to fight with each other, because of course it was all the others fault. When they saw me coming they almost overrun me taking me by my arms and shaked me, screaming that they couldn't find the exit and that it was of course the other sisters fault. They both were near a nervous breakdown.

I shook my arms free and told them (this time in french and not in flemish, just to annoy them) that I would ask in english some shop owner and he surely could help them. They followed me like two headless chicken still fighting and I asked a man where the leather stuff exit was. He tried to explain me but the two sisters were so excited that they fumbled around under the poor guy's nose with their paper to show him the name of the exit they had written down. The guy looked at me and I saw laughter in his eyes, the two girls had noted the word "Bazar" in turkish and with that of course nobody could guess which exit they meant.

The way out was very easy but it was far too early for me so I walked them to the exit and left them to their fights and turned back to see if there was something interesting to buy.

When I got finally out I found them all standing there like motherless chicken, Buddah with Stiff Stick and Smily hadn't even dared to go in and stood there for 2 hours, the Spider family had just made a few steps inside, only Anorexic and company had done the same as me. They all pushed a deep sigh of relieve when the guide appeared and safely conducted them back to the bus !

Moral of the story if you want to travel you better learn a language that most of people can understand !

Hello Gattina ~~ The Turkish Bazar looks wonderful, apart from people who don't know where to get out!!!
It looks as though they have Everything there. I wonder how the prices were compared to Belgium.
It is strange the seasons being opposite, you in Summer, and us in Winter, and our times are different too. But the Internet helps us all keep in touch, regardless. Take care,
Love, Merle.

Was here a little while ago, I wrote you a nice long comment and blogger decided to crash when I hit the go button. Love you story about the bazar looking for to your next installment. I haven't posted anything on my site today I am to busy looking at everyone else's today. The turkish market reminds me of the Mexican market's in Tiawan and near El Paso texas. They have that sort of glass ware and rugs, blankets. But I never saw ceiling like those that you showed in the Turkish bazar. Also I have never seen mexican tea but I see you found a display of Turkish tea. Have a wonderful day Gattina. Many blessings to you. Thanks for making me smile with your words. Callie Ann

First of all, Pookie looks a little too relaxed alongside that water pipe. What exactly was it that he was smoking? :-) And what a great adventure the Turkish bazaar! And I'm sure the Turks owe you big for getting the screaming sisters out of there!!

oh dear...I took Spanish one winter a few years back and I could not learn it. And that is the EASIEST most pure language to learn.

Will I never be able to travel?
Can I come with you.

the pictures were so inviting.. except of course your hookah smokin cat... giggle

Ohhhhh MY! That is TOO funny! But isn't that Bazar a beautiful place! Imagine putting those CATHEDRAL type ceilings in a shopping place!!! With all the fancy decoration! Just gorgeous! WOW! I would imagine most "foreigners" just go to LOOK and don't buy a thing!!! LOL!

Hello Gattina, Great photos of the Bazar I laughed at the 2 sisters story screaming and blaming each other and attracting a crowd..
We went to Rome could not speak Italian,had a good time never got lost but sometimes we had trouble with Menu's.

I have been to the Istanbul Bazaar! How fun it was.

I would go cray here with buying trinkets and neat jewellery! My friend just got back from a Med. cruise and brought me the evil eye charm thing that you see all over Turkey.

oh i would have love to be in that bazar but not with anyone like the sisters.. i think the travel agency should have given you some royalty for all that assistance you have given to your fellow "tourists"