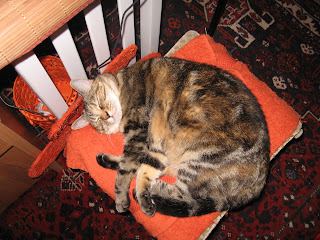 Pookie is happy and occupies her usual place again !

I am back from my roundtrip through Turkey and I can only say it was beautiful ! So many historical things to see ! My head is full like a balloon, I have to sort it out first. In 7 days we made about 2000 km (1243 miles) from the south up to the north until Istambul and then down again.

The group I travelled with was a flemish speaking one, because the french speaking group had been cancelled. It didn't bother me at all because I understand dutch very well and flemish (should) be the same with a slight difference in pronounciation.

The only hick was that I didn't count on the mentality of flemish (belgian) people ! I always never want to generalize but unfortunately they had all defaults what is usually said about them. Stubborn, narrow minded and not social at all. We were supposed to be a group, travelled together and had our meals together but everybody kept his "own" group. I never knew the names of all of them ! That was the first time such a thing happened to me. 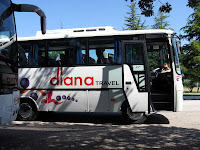 The "group" was a buddah like woman with a stiff stick husband who never said a word, I don't even know if he can speak. She also had her brother with her a retarded man who had a permanent grin on his face so that I baptizised him "Smiley". She had to lead him by hand all the time and the poor man wore a suit and leather shoes and outfitted like that stumbled through roman and greek ruins.

The next "group" in the group was a red blond orang utan man with a potatoe nose who spoke a dialect that even our turkish guide who had grown up in Holland and spoke perfectly dutch couldn't understand. He was with his wife who were a kind woman (the only human in the group) who laughed a lot and spoke perfectly german and also english and french. She was the only one who spoke another language then flemish. She had her niece with her who was anorexic, a walking skeleton who didn't touch any food (which her uncle swallowed with pleasure, so he had two plates) only some fruits and a bit cheese. Then there were two old sisters, who chatted non stop in a strange flemish language all the time we were in the bus and also outside. They watched each other like watchdogs and faught and were afraid of everything especially thiefs and went to the buffet with their handbags !

A young couple was there too, she looked like a spider with long skinny arms and legs and was always busy to take pictures of her poor little daughter 5 years old who had to make this tour and also climb through the ruins and listen to the explanations. Her husband was just an accessory never opened his mouth and just trotted behind them. The last "group" was a couple which seemed to be normal besides the fact that they didn't make any contact either.

At the end I became a sort of complaint office, everybody came to me to complain and to bitch about the others, the old sisters against buddah, stiff stick and smiley, and vice versa, the anorexic against the old sisters etc. I took it with humor and made fun of it.

Fortunately I could very well understand the guide and that was the most important thing. But at the end of the trip I disappeared quickly just waving a good bye, (without bye) and sweared to myself never ever going with a flemish group again ! I really wonder why these people travel ? They never asked a question and didn't seem very interested either. Probably it just was to be able to tell their neighbors that they had been in such and such place in Turkey !

The rest of my holidays (4 days) I spent in Kudasasi a little town with a big cruise port where I could see every day another cruise ship. It was a very typical little town and there I also found an Internet café. The hotel also had Internet service but at the modest price of 10 €/hour (!!!) in my little café which a taxi driver had recommended to me I only payed 1 €/h ! A slight difference !

Of course I will report more about my trip, this is just a short message that I am back again. 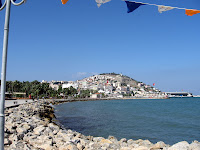 Kudasasi view out of my window 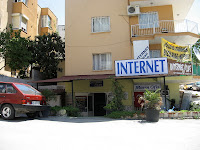 LOL, loved your descriptions of the groups within the group. You are a great people watcher. I have never travelled with a group so I cannot compare...
Internet connections' prices are very often simply ridiculous! the best I have found in the Alps is 6 euros/hour!

Looking forward to more pics and stories, I have never been in Turkey.

Having a break drinking my coffee, enjoy your sunday!!!

Your enlarged pics are wonderful! can't get mine to do that now and I wonder why...I get a strange "on blur" code and can't change it when I upload pictures...oh, blogger!!

Oh YAY! You are BACK!!! I have MISSED you sooooooo much!!! *kisses EACH cheek!* When I come to travel with you, we WILL travel with the Flemish and be our OWN group and laugh and giggle in ENGLISH and NONE of them will understand! And they will knOw we are making fun... and we will be! LOL!

I dO so LOVE the way you tell a story! I can't wait to see the rest of your pictures, because I really HAVE heard how BEAUTIFUL Turkey is - and it IS a stop I would like to make if I EVER get a world tour! ;)

Oh! And that INTERNET sign is simply hideously ugly -- but I bet it was beautiful to you when you found it!

This is a great blog!! I will be back for more.

I'm sorry to hear about your bad travel fellows, but happy to know you are back safe and sound!

I'm glad you took it with humor though - I knew you could!

The pics where great - what a great view and a special kind of Internet café!

I'm glad your back home as I'm sure your cats are too. Foreign travel is really foreign to me, but you made it very interesting. I can't wait to hear more.

I just panned down and read your Thrusday Thirteen. I just started last Thursday. I really like that group.

That was certainly an eclectic group! I love your descriptions and had to laugh. You are way braver than me traveling like that and going to a Turkish Internet cafe, but I am sure they don't hate you like the world is hating Americans right now.
Glad to have you back safe and sound and with great stories!

Welcome home. I laugh at your comment about speaking flemish!! In US flemish is a medical condition where you have flem in your throat and you have to cough to get it up!! Wet hacking sound!
Of course that language might sound that way. Thanks for the description and the fun way of talking about your group.
All I know of Turkey is a movie I watched called Midnight Express about a young American who was busted for trying to smuggle hashish out of Turkey and was sentenced to 30 years in a prison there. Terrible ugly country, but the movie was made in 1970, I hope it's better now!!
Glad too that Pookie is smiling again!

I don't know whether to say "poor dear" .... or laugh with you about the wonderful story you have to tell now.

I'm sure you know flemish sounds like pleghmish (which is that stuff you choke on when you have a cold and spit it out of your mouth. ha ha ha ha)

Oh Gattina,
It sounds as if you were mistakenly put in a mentally challenged tour group. I feel terrible for you. No people with intelligence to have wonderful conversations with. Oh girl, I must say I feel bad for you. I am glad you were able to take the tour thou. Who did you eat with?

I bet the kitties were so happy to see you. I am so looking forward to the rest of your stories.

what a wonderful adventure you've had not only with all those beautiful and historic towns (plus friendly locals) but also all with your travelling companions.. i admire you for your patience being the shock/complaints absorber.. nevertheless your wit and humor put you through such challenging times and now you have such funny stories to share to all your blog friends :) thanks for that tour bus ..

I am glad to see you back - and it sounds like you have had a great time. Can't find a Cats on Tues post for this week but I'll play again soon... this chap just sleeps a lot. And there is only so much sleeping cat you can blog about!