I didn't feel well on Monday, I kept thinking about the skeleton I saw lying on the bed this weekend. Luckily Isabelle my personal "nurse" came to help me to fix and put up the parasol. One worked, the other one not and I decided to buy a new one. My terrace is so sunny that it is impossible to stay there without parasol. And as I was already there I cleaned the seats and the table and put the decorations and flowers in place which helped me to not think. 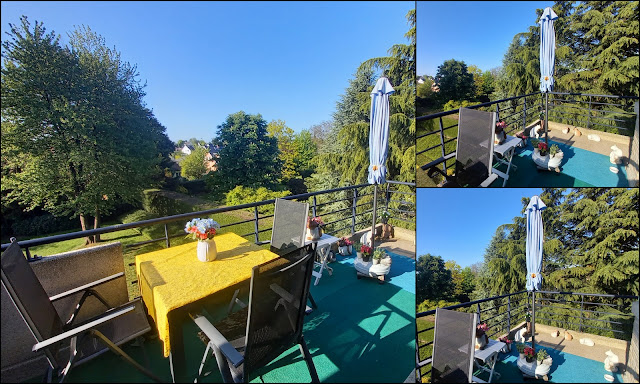 and this was the result

I had to do some shopping for Rick, as he can't drink from a glass anymore, I had bought a bottle for children where the water doesn't run out when you turn it around. I bought a second one because those they had in the home were not practical. I also bought a little plastic bowl for yogurt or ice cream.

I had taken Adeline with me who also needed some decoration things and then we went to Rick. She stayed downstairs with the others and I went in his room alone. He was sleeping and as I tidied up a little bit and filled the bottles with juice and water, he suddenly woke up looked at me asked me what I was doing, I answered and hadn't finished my phrase yet he slept again.  I picked up Adeline and we went home. 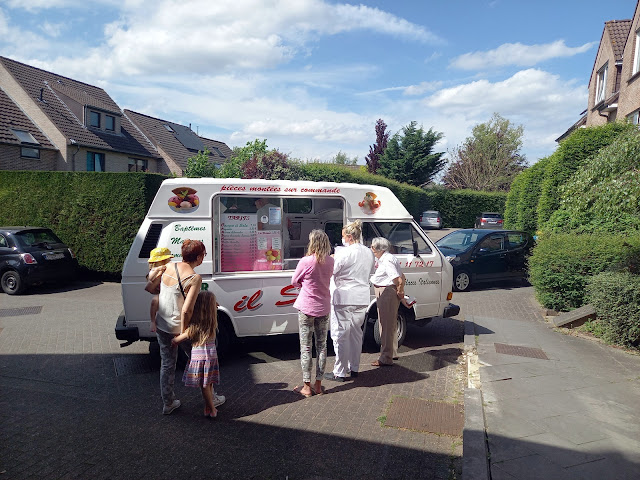 I knew that the next day the ice man came and that was always a big event. The oldies were waiting already like children excited to get their ice cream. I joined them with my bowl, and they let me be the first so that I could bring it to Rick.  He was still sleeping like he was when I had arrived and now I woke him up just telling that I have two balls of Straciatella (vanilla with chocolate crumbs) He didn't even open his eyes but his mouth and spoon by spoon I put the ice cream in his mouth. I suddenly had to laugh because I looked like a bird mother feeding their baby birds. They also just open the mouth. Slowly, slowly he continued opening his mouth until the two balls were gone. I asked him if he enjoyed it, but he didn't answer he slept. I gathered my things washed up the bowl, looked around to see if everything was in place and then I returned home.

I also had met his doctor and had a long talk with him. Now he will lay in bed gets special liquid food because he can't swallow anymore and to drink of course. I insisted not to let him suffer but
she reassured me that he gets also painkillers and tranquilizers.

Now it is a matter of time. I had time to get "used" to my situation. "Used" is a not really the word, because I will never get used to the fact that the rest of my life I have to live without him.

Today my son is coming together with Toby, but we have decided together and Toby agreed, that he won't see his grandpa in this state, I prefer that he keeps his Nonno in mind like he was when he was not sick. 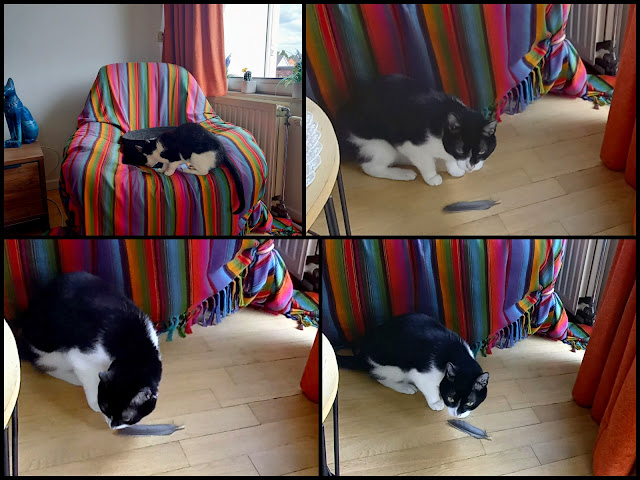 And see my little cat playing with her feather and throwing it in the air, running around and catch it again, calmed me down and I thought it is a pity that Rick can't see that, what we also shared was the love for cats. I remembered that it was my first cat who choose Rick for me. 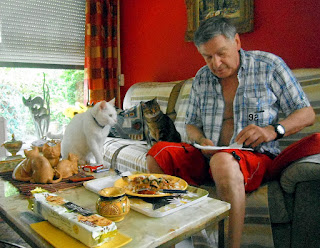 more participants at Susanne at Living to tell the Story.
Posted by Gattina at 10:47