The week started with rain and we could breath again ! Even I had no excuse anymore to sit on the sofa the whole day and do computer work or watch a movie. This time I had to go out for shopping. I asked Adeline if she also needed to shop and she too was relieved that her eyes were not swollen anymore and she felt much better.

We filled our caddies and my little car was full ! I don't know why but there were no choice in fruits, only apples, peas, and Kiwis, besides the classical oranges and Bananas. When we came back we met Lou another neighbor in the garage and surrounded by our shopping bags we chatted for a while ! Now it wasn't the Covid anymore now it was about the French elections, poor France had the choice between a Putine fan, extremist, and nationalist Marie Lepen and the former president Macron, who is a bit snob but at least for the European Union. To avoid a Putine fan you really had no choice.

The next day, I was in my bathroom and got dressed when a loud voice spoke something in the Living room. I thought it was the TV and didn't pay attention. Suddenly the doorbell rang and when I opened the door a red faced breathless Adeline was standing there looking at me as if I was a ghost and then said relieved, ah, you are OK. I didn't understand. In fact what had happened I am connected to Telehelp who does a check once a month. So they had called me on the device which is installed in the living room and this was the voice I had heard, then they called me on my phone and as I didn't answer they had called the next number on their list in case of an accident and this was Adeline who had a spare key. Adeline had thought I was half dead or at least somewhere laying on the floor, and was near a heart attack. I called the Telehelp and told them that I am OK, that I just hadn't heard my phone.

I had bought juices, cheese cubes and the obligatory waffles for Rick, so that he had something to nibble while watching TV and went to visit him. The chief nurse when she saw me came to tell me that Rick had a crisis again, had pulled out all cables and had made a mess in his room. He also was fallen and they had to give him a sedative shot and he might be asleep now.

We talked a bit and both realized that his condition had worsened. When I entered his room, he hadn't fallen asleep but was completely confused. I quickly put my stuff in the fridge because he was upset again that I wasn't sitting on his bed, and before falling down again or getting angry I sat down quickly. I gave him a glass of orange juice and drank one too but there was no reason  in staying, it just made me sad. He was half asleep anyway, the injection had finally worked. 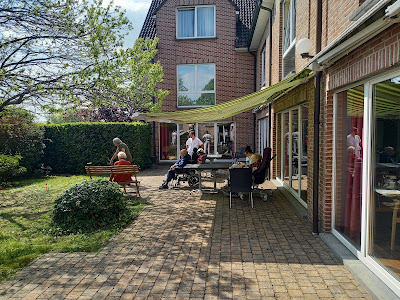 I stayed a little longer with the others who were sitting in the garden and playing a game. Then I drove home. My friend and ex neighbor just came over to help me with my printer but we ended up talking. about Rick who she has known since she was 5 years old !
To end the week I had an appointment with another bank, to change the  joint account on only my name, since I am now solely responsible for everything related to administration and banks. For this I needed 3 attestation, one from the doctor, one from the health insurance and one from his residence that he now lives there. That sounds complicated, but is justified, because if one of a married couple want to cheat, and empty the account it's impossible. But in my case it was done immediately as  Rick can't read or write anymore.
After that I went to Nicole, it was quite some time that I was with her, but we called each other almost every day.  Despite her brain cancer, she is in pretty good shape, she walks very slowly and forgets a lot, but otherwise her head is quite clear. We talked about our lives now and how much everything has changed. We laughed about travel adventures because we had traveled a lot together. 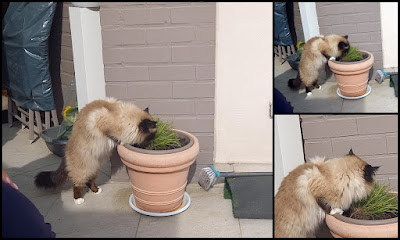 Isis enjoyed the company and ate her grass it was nice and warm on the terrace and it was good for both of us to be together, it's just so sad that we can't travel together anymore. But it's better to make the best of our situation and not grief about the past, we can go to the cinema! for example. 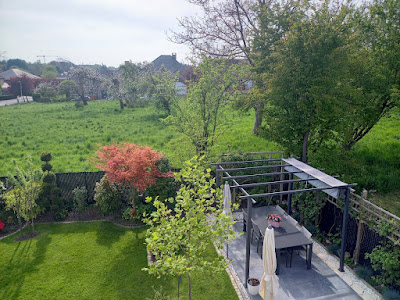 I took this picture of a very small garden of her neighbor, but she had made a little "Versailles" out of it with 5 parasols, and as I am looking for one, it gave me some inspirations.
My car hadn't been washed since before Christmas it is white and I always thought it isn't dirty, but it was and while I was sitting in the car which was slowly pushed through the Carwash I took these "artistic" pictures. 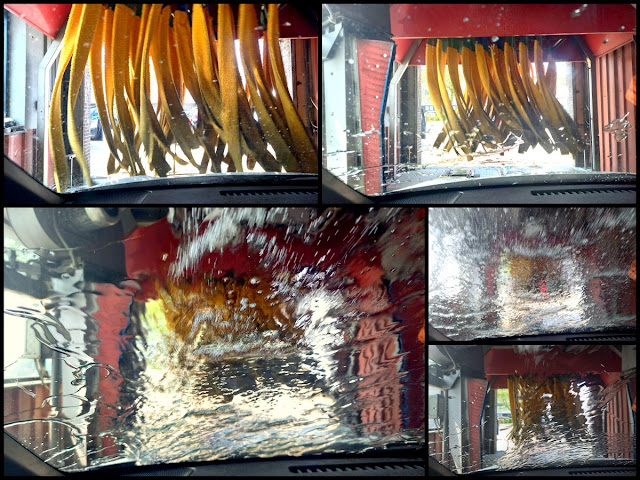 And another week is over.

more participants at Susanne at Living to tell the Story.
Posted by Gattina at 10:25