1. We're approaching Memorial Day Weekend in the US of A...will you mark this in some way? If so tell us how. According to a list found here some things you might do in honor of Memorial Day would be-shop in a Veteran owned business, learn to play a patriotic song, watch the Memorial Day concert, take a virtual tour of the White House, write a letter to a soldier or a soldier's family, fly a flag, attend a Memorial Day parade, donate flowers for a soldier's grave, put together a care package for a soldier, and take a moment of silence at 3 PM (the National Moment of Remembrance)....of the ideas mentioned are there any you will try? 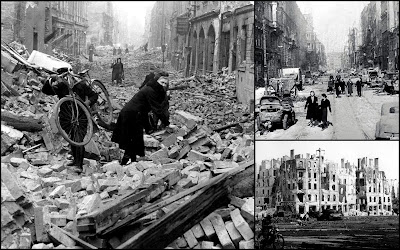 These are pictures of 1945 from a city in Germany where I was born and lived until I was 14. Therefore we have never celebrated a war, a soldier or heros ! We fly flags for peace and there is no military for war purposes in Germany anymore. They have had enough.

2. What's something recently that made you 'come to attention'?

I noticed that even in rush hours the streets are empty, the boutiques are empty, probably due to the lockdown, although all shops are open. I think people learned to buy on Internet and now continue !

3. In what area of your life do you need to 'soldier on'?

As I am retired I do not play soldier, anyway that's not in my character

4. As a long weekend approaches and summer draws near, what's a favorite food from your childhood you think about adding to the menu?

No long weekend is approaching, we just had one, and I can't remember that I had any favorite food as a child, I didn't like eating. I ate because it was on the table !

That has not yet been created as far as I know, I am a European, because we all have different passports, I am German, my husband Italian, our son is German and Italian, but born in Brussels. That's why there is no patriotic movie for our family and we are only patriotic when it comes to Europe.

I wonder how people celebrate wars and heros, usually heros are dead, and for what ? for politics !

Why the WWI is still celebrated and the second one too. I am allergic to all military things. I had my share, I was born in the middle of WW II in a German bunker and I spent my first night in a drawer because there were no baby beds. My Disneyland was the ruins, the basements without house on top, and I think we had a lot of fun. Nobody watched over us the adults were busy to dig out their belongings and put away the rubble. I was told that becoming a soldier is bad, all uniforms are bad and parents who had a son in the army never mentioned it they were ashamed. Germany had decided no war anymore and soldiers only to safe and protect people in critical countries like Afganistan, etc

This hodgepodge was not for me !  But I decided to participate !

I don't think they celebrate the war, I think they honour the soldiers who fought for freedom. However, I do get where you're coming from, as I too find it occasionally a bit much. Most of the soldiers who are honoured were told to fight, they never had any choice. And this goes for both sides!

In the Netherlands we remember the fallen (both civilian and military) on May 4th and celebrate freedom on May 5th. I think that is very important.
As for patriotic films? Yeah... no! Not from my point of view anyway.

Hello Gattina, I read your comment (on Diane's adventures) about the difficulties you are going through as a result of your husband's illness. I'm very sorry. I know how hard it is when you have a loved one who needs so much care and attention. It's even more difficult if they no longer know who you are. I hope you can stay strong and as stress free as possible. I found your thoughts on wars and heroes interesting. You have a very different perspective because you grew up in Germany. Most of us have had enough of wars but it seems like they continue anyway. Blessings to you.

We just had a three day weekend. Victoria Day is a holiday Monday here.

It is good to read a different point of view from a different country. Really makes you think. Thank you !

I'm lay low this coming weekend.
Coffee is on and stay safe

Bill has the same opinion as you. yet he is from Neutral Switzerland. My parents went through hell in London and I was born in the middle of the war like you. There was rubble in the streets and queue for food. I don't like celebrating war either. People say we fought for our freedom but people in countries that lost the war lost the war like Japan and Germany are free today.