The week continued with this lousy weather and I had to force myself to get up I badly needed a cup of coffee and cat Rosie refused to make and bring me one. Finally I was dressed and ready for the day but it had taken so much energy, that I collapsed on the sofa which I didn't  leave anymore I was so tired as if I had climbed up the mount Everest. To change from computer to TV screen I looked through the window screen. 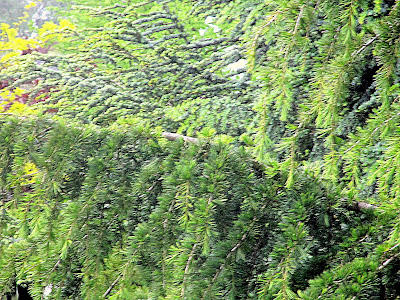 With interest I watched a magpie sitting in/on the tree. I took a picture from this charming bird which you can admire here. Unfortunately it must have flown away while I took the picture 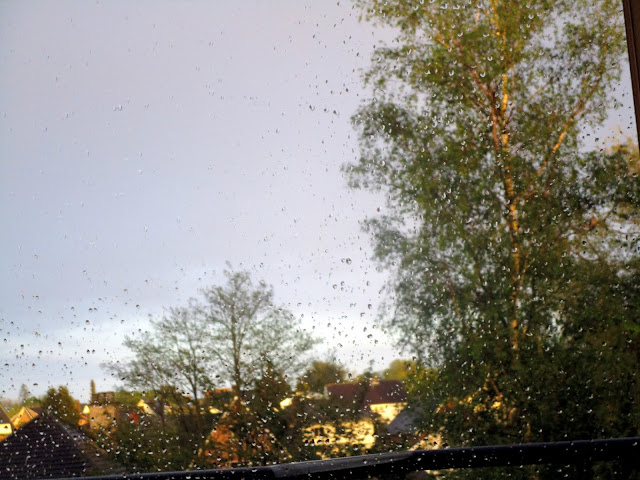 A little sunshine came out while it rained and I thought I have to take a photo for the future generation just to prove them that even here we have sun from time to time.

Scrabble day was better, we were the usual four, Nicole who is now out of hospital and home again, had an appointment with the eye doctor. 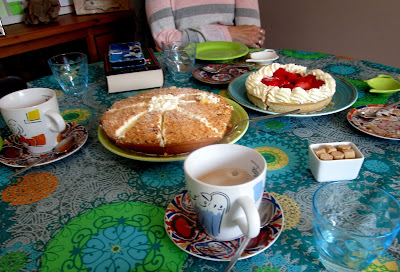 After scrabble came the best we had two cakes for 4 persons so we could play : "All you can eat" !

Nevertheless a quarter of the cake was left !

Finally I have met my new neighbour ! She had moved in on Wednesday but I hadn't heard nothing. She invited me for a cup of coffee and we realized that we were two chatterboxes ! We talked about the building and she had some questions. Then her son arrived, I have to say the second son because she has 3 and one daughter. All have 2 or 3 children which makes a lot of grand-children compared to my only Toby. The son was very nice and loved to chat too. Finally I said good bye and wanted to go next door into my apartment and noticed that I had no key but instead my smartphone and a pencil !

Now I couldn't get in ! The son tried through the balcony to open my living door but it was locked. Calling a professional to open the door would cost a fortune because it's blinded and has 3 locks. (Try to break in) Suddenly I remembered that I had a spare key in my car, but no car keys ! I thought it would be cheaper to break a window in my little car and take the key out. The son looked for a hammer and then we both went down into the garage. Fortunately he first tried one door and .... it opened ! I had forgotten to lock the car ! Distraction was my luck this day ! We laughed, I took the keys and gave it immediately to my neighbor, so she keeps my spare key and I hers just in case it would happen again !

This was the first time that it happened and hopefully the last time.

The last day the sun came out very modest, but still and apparently we will have a nice warm and sunny weekend. I visited Nicole for the first time since she left the hospital, her daughter stays with her the first weeks to see how she will cope alone.

My son and Toby will come on Sunday, Toby and I stay together here I have to think what interesting things we could do together while my son visits his Dad.

Unfortunately he can only come for a day from Amsterdam to avoid the quarantine. I am so fed up with this dammit virus ! Keeps even families apart ! 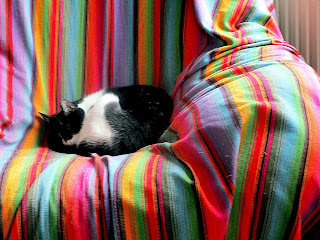 Only Rosie enjoys her lockdown sleep as usual

Fortunately it resolved itself.

So your blessings are which?? hahahah....seriously....so sorry to hear of your icky weather and getting locked out of your apartment. all those sweets!! that must have been fun, at least right?? and you get to see your grandson and son...that IS a true blessing, right?? The virus is winding down.....relax, take a deep breath and things will get better as you lean on the One who is in control of it all.

Tiredness is probably from the stress. I'm glad you have a friendly neighbour and its a good idea to share keys. WE have a key safe outside outdoor with a pin number to get in if we forget our keys or if a para medic has to get in the office has a list of all the pins to get in just in case we are passed out on the floor. Hope you have a good time with Toby. If you run out of activities the iPad is a good back up.

I enjoyed your story about your neighbor and not having your house key. My neighbor and I always shared our keys. Saves a lot of hassle when we lose our keys.
Have a wonderful time with Toby!

That is quite an adventure with the keys. Glad you made a friend out of the new neighbor through it all. Have fun with your Grandson.

So glad the key situation turned out alright. It must have been frustrating in the moment. And it's so good you have good, enjoyable neighbors. Good idea to trade keys.

I'm glad your son and Toby get to come up and your son will see his dad. I'm sorry it's just for a day. But maybe by the next time they visit, the restrictions will be lift a bit.

Hope the weather improves and you have things to brighten your day.

Well I'm glad you managed to resolve the key issue. I hope you had a good visit with Toby.