Another Corona lockdown week went by and now I have to write down each day if I have done something special or if something special happened in my daily routine. All days seem to be the same and go by so quickly !

Our footnails had become long and as pedicures are allowed to work, I had called mine for Monday. I have known her through our Facebook city page and she is a medical pedicure. Besides that she also is a chatterbox and I am now updated about all important things which happened in our town.

She had her phone besides her because she has an autistic son and has always to be available. That is often very difficult. This time she was 5 minutes late at school with him and he didn't want to go inside because five minutes are five minutes late and not 9 am sharp ! There was nothing to be done. She had to bring him back home. He lives after the clock and everything has to be in its place and not a millimeter further. 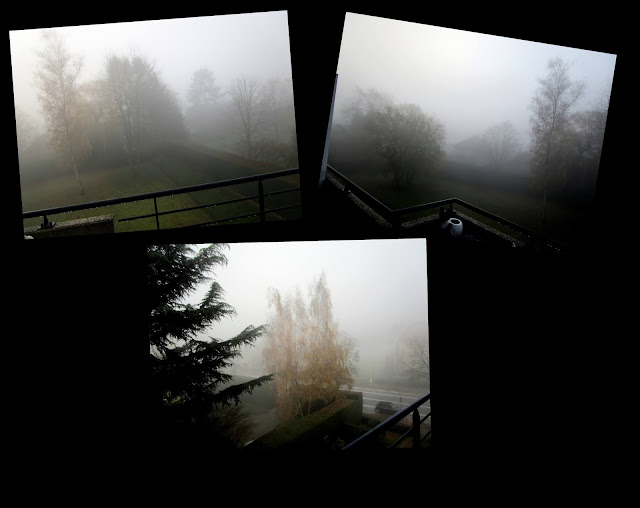 The next day when I got up and opened the curtains, the houses and skeleton like trees were hidden behind a thick fog wall ! By the time I had prepared my Blog posts it cleared up and the fog became a grey sky. This announced a Television day, and internet window shopping ! Of course in between long telephone chats with friends !

As usual our 3 girl group met this time at Myriam's and she had prepared the scrabble game ! Both Nicole and I were not that enthusiastic about playing, but we did and it was good for us to do something else than sit in an armchair and chat.

We admired the swimming pool which she had cleaned for the winter and to break eventual ice, there were empty plastic bottles swimming in the water. It's a lot of work to clean and prepare a pool for the winter !! 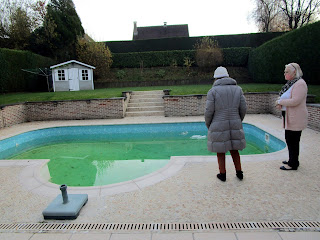 The only day in the week when I get up at 7 am is Thursday, because my cleaning woman comes and I have to open the door. And this is also the only day I assist to sun rises. This time it was again beautiful ! I became a real skywatcher in this apartment ! 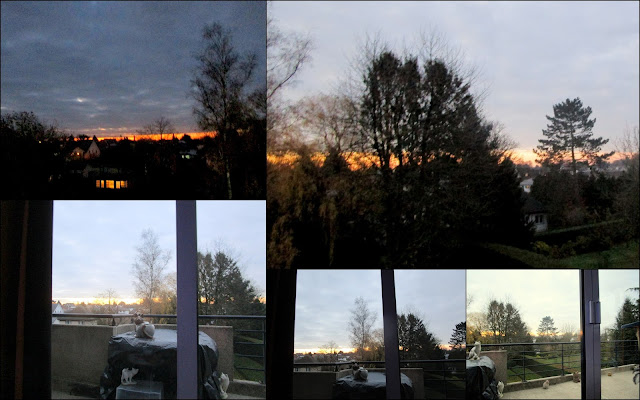 Here is the view I have while sitting on the sofa and drinking my coffee ! Could be worse ! I am really lucky !

As we meet every two days, the two of them came to me this time. Our mayor's assistant died of the Coronavirus yesterday evening, after 5 weeks of intensive care. Although I didn't like the man at all, we had worked together when Waterloo celebrated the bicentenary of the Waterloo battle, I certainly didn't wish him such a terrible dead.

He also was a history writer specialized in Napoleon's life and has written several books about him. He was still quite young, at least too young to die, he was only 57 years old. There will be certainly a lot of funeral ceremonies with restricted number of people as he was quite a well known man.

Still, we had a nice afternoon, the sun was shining through the windows and we talked about the next government meeting where it will be decided if the shops are allowed to open for Christmas and also the rules for December. Anyway the three of us are prepared to celebrate Christmas alone without our children. For me it would be the first time ever since Toby was born, but my first Whatsapp Christmas Eve ! 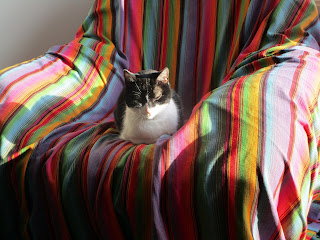 The only one who leads a happy life without any worries, enjoying the sunshine, is little Rosie. Lockdown or not, she anyway never goes out !

We won't be seeing my sister over Christmas either. Lockdowns on both sides are preventing that. It will be a year since I last saw her and for my parents it's even longer. But I rather see her when everything is safe again than always wondering whether you are keeping enough distance or not.

The sky looks as though it is on fire. It makes getting up early almost worthwhile.

The fog is a beautiful touch.

I don't expect to see family until sometime next year.

The sunrise is gorgeous! I really love the view from your apartment.
Very sad about mayor’s assistant to pass away from the virus. Too young indeed.
I hope you will have fun WhatsApp Christmas Eve :-)

Both Hubby and I celebrated our Thanksgiving together and it will be the same for Christmas.
Stay Safe and Coffee is on

Good that you can get a pedi and the news at the same time! I am long overdue for a pedi. Such a beautiful view of the sunrise. I suppose we should all learn from Rosie, to just be content.

You found some good things in this lockdown week. Pedicure, sunrises, kitty cats.
I'm sorry to hear about the man who died from the virus.
Stay safe and well!

You did find some good things this week! I'm up before the sun, but our windows are situated that I don't usually see the sunrise unless I make a point to look at it--which I often forget to do. Your view is lovely. I'm so sorry about the man who died.