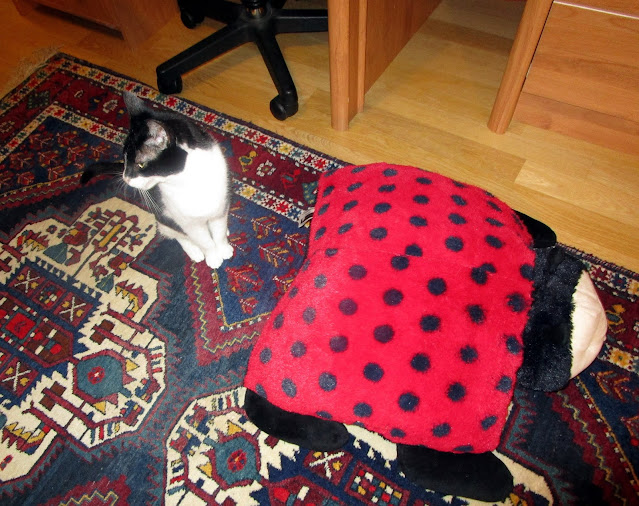 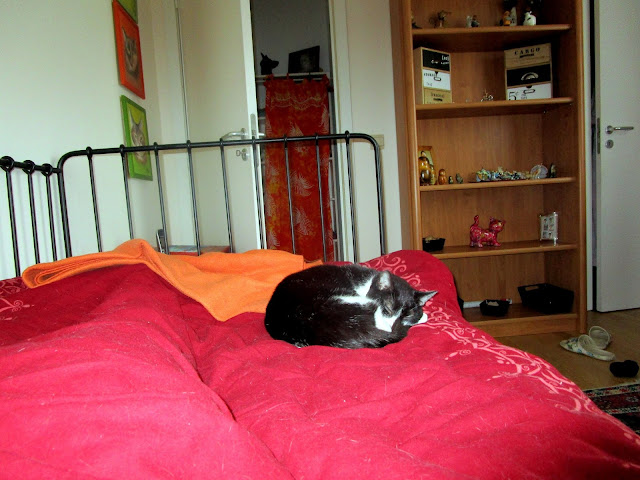 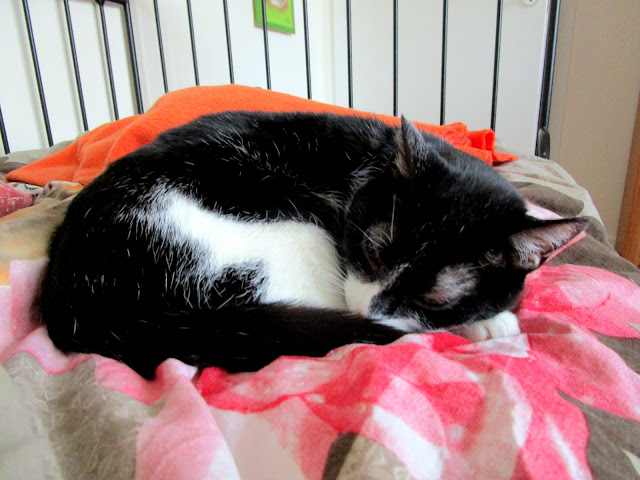 Saturday morning I went down  to the garage because I had forgotten a bag in my car. I took the car keys and went down to the garage, picked up my bag and wanted to return into the apartment.

What I had forgotten was that we live in a kind of Alcatraz and without a badge you can't get out or into  the garage or into the building and the apartment.  Now I was standing there and thought how get I out of here ?

I tried to open the garage door, but it didn't move I pushed on all buttons which I found without success ! There was no alarm button, at least I didn't see any ! Suddenly I remembered that in my bag was my mobile and with my mobile I could call Mr. G.

Relieved I called him and told him that if he doesn't come to let me out, I would spent the whole day in the garage unless another human showed up. Maybe he had the temptation for a minute, but then after a while he came down and let me out ! At the last I can say that it is very difficult for burglers to steel here something !

As we have the second lockdown, some of the big stores look very funny. They are allowed to open but only for selling food, cleaning and beautystuff, nothing else because otherwise they would be competitors to the little boutiques which are completely closed as they don't sell "essential stuff" I only hope I will not run out of shoes or stockings or maybe underwear ?? Doesn't matter, I have enough friends who could help me out. 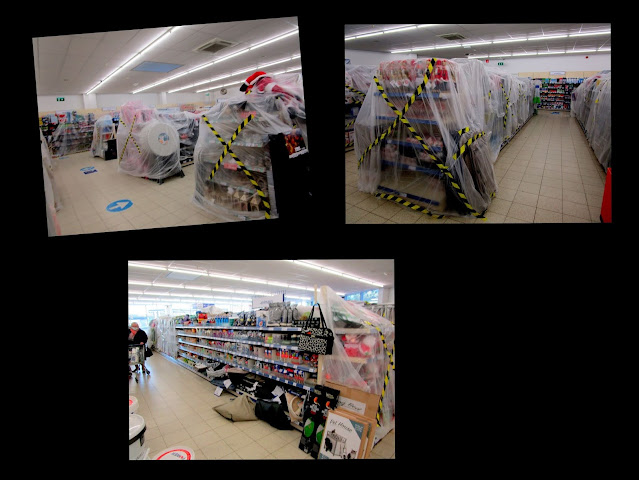 The shop looked like a Halloween decoration,  Christmas decoration, clothes, toys etc were hidden under the plastic sometimes you could see a Father Christmas sneaking out of a corner, or the legs of Rudolph ! I think we were three in the whole shop with our caddies and disinfected hands. I didn't need toilet paper but I saw there was none ! Apparently people were hording again ! I bought my cleaning stuff and returned home. Normally on a Saturday the city is packed and one car is behind the other and you have to pray to find a parking space. This Saturday the streets were nearly empty !

I  also had to go to my pet shop because cat Rosie's food was running out and also the litter, toilet paper was not a problem as she doesn't need any. 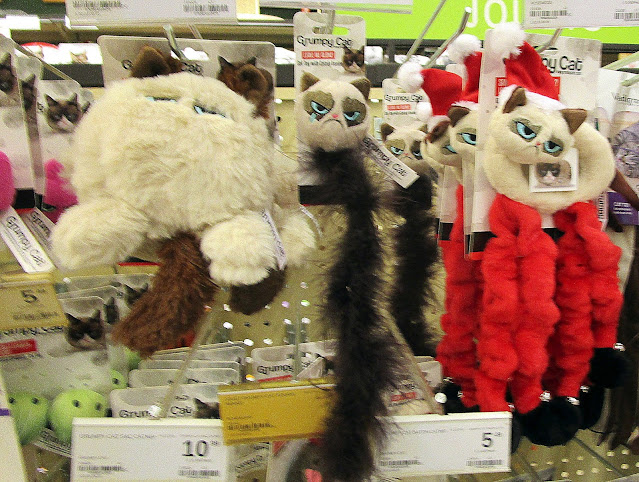 I wanted to buy her little balls to play with and green mice but I found only toys which are more made for humans than for cats, like the "Grumpy cat", Rosie doesn't care about toys representing a grumpy cat, she prefers a little ball, spiders or mice. In this shop there were more people with their dogs and so as you are not allowed to have more than one person at home, the masked dog owners were chatting together and the dogs sniffed at each other not wearing masks.

On Sunday I was so tired in the morning as if I had worked in a mine the whole night. But I had slept and even good. Maybe that a good sleep makes me  tired now during lockdown times !

In the afternoon Nicole and Myriam came for our  Corona lockdownchats, this time it was my turn. As the hairdressers are also closed I wonder why, because I think they are essential, Nicole and Myriam both amateur hairdressers convinced Mr. G. to let his hair cut at least the "back"side ! He looked like a hedgehog ! They did a good job and now Mr. G looks "normal" again.

Probably next time they will have to cut the front ! 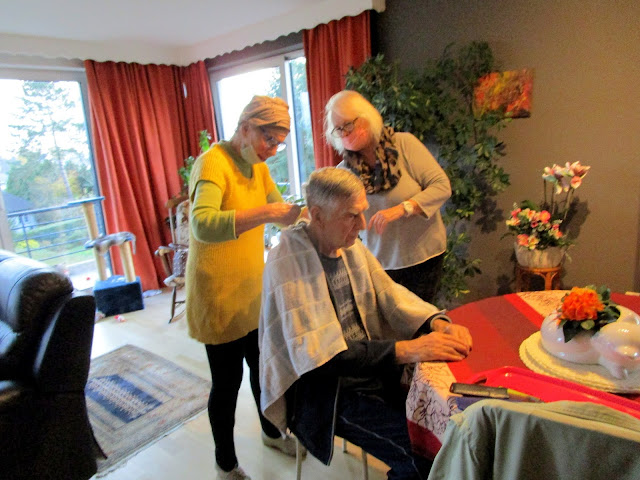 Isn't that nice to have two hairdressers ? 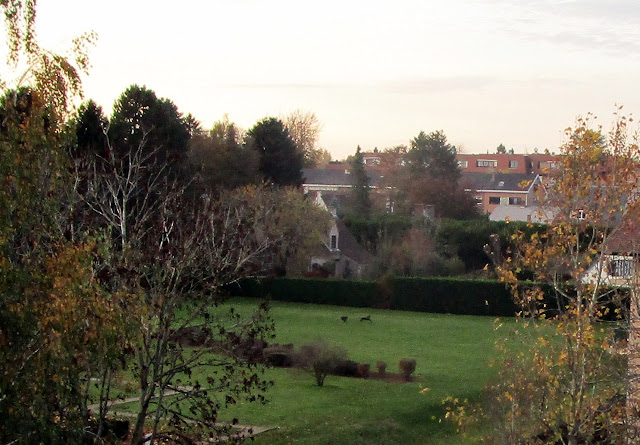 The weather was beautiful and some people even sat on their balconies, we had a look over to the park where two dogs were running around and enjoyed their freedom.

Of course in between we talked about the toddler Trump, who still things all States cheated in counting the votes and makes himself ridiculous. I think we will miss him, he made us laugh, the one and only president who did a very good performance as a clown. A lot of people will feel happy now, he was also a dangerous man. 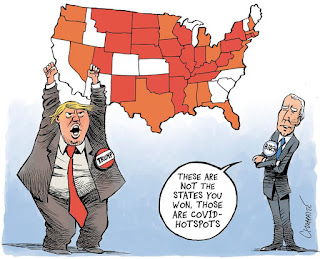