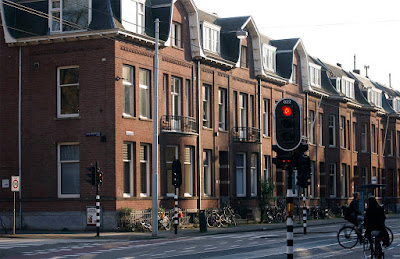 I was visiting my son in Amsterdam when he still lived in a little flat in a row house. The houses looked all the same and I felt sorry for the mailman to find the right address ! 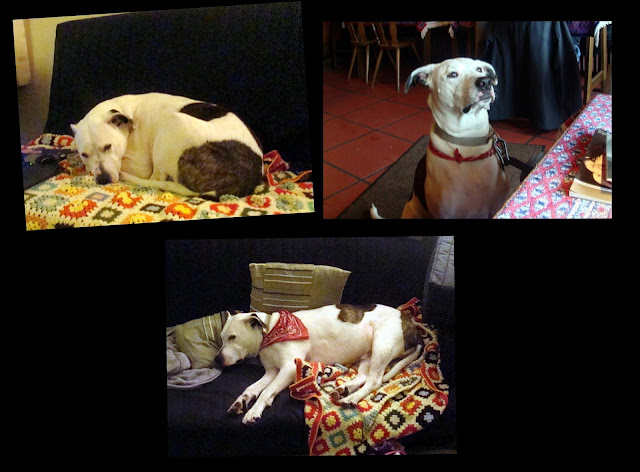 During my stay he had another guest, a very friendly to me unknown mixed dog breed which belonged to one of his colleagues who was away for a few days. I am more used to cats who go in and out as they want, but a dog in a flat has to be walked outside to do his business.

As I was the first up,  I thought I can walk the dog and let the others sleep. Which I did. Sam immediately took me to a place which was used also by other dogs as toilet, which was very generous of him, because otherwise I had to pick up what he had to do and put it in a plastic bag. As soon as he had finished he wanted to return home. Me too. So we stood on the sidewalk and I realized that I had forgotten the house number and my mobile ! How could I find the right house if they looked all the same and the doors too ?? I asked Sam, he is supposed to be a guide, other dogs do that too, but he looked at me with question marks in his eyes and wiggled with his tail. I told him to find the right entrance. I remembered that we had walked along at least 3 or 4 houses and at the fifth I walked up the steps, because not only the houses looked the same, but they all had steps to the main entrance door. Sam followed me and while I read the names on the doorbells he lay down and waited.

I became angry and told him that he is a stupid dog and he should find the entrance there was nobody around it was too early. With a deep sigh I climbed up the steps of the next house, again wrong, down we went and up we went at least 5 times and meanwhile Sam also wondered why it took so long to return home ! And then a miracle happened, instead of laying down and waiting for me reading the names, he went right away at a door, looked at me and wiggled its tail and the whole back with it ! We had arrived at the right address ! Even the key fitted ! I was exhausted, all this adventure without a coffee before ! I just had left the house in my nightgown and my coat, thinking I would be back in 5 minutes ! Instead it had lasted at least half an hour and my family was already wondering where I had vanished.

Linking to Linda G. Hills One liner Wednesday - Door
Posted by Gattina at 07:00

My goodness that much have been quite the trauma.

Sam is a cute doggie. I'm glad you could get back eventually :-)

Oh dear. It sounds like you had quite an adventure - and all before breakfast too!

Quite a tale! Cute pup.

You had me laughing even though I doubt you thought it was funny at the time.