WHAT SHADE OF COLOUR ?

After having done my shopping, I stopped at my friend Nicole's for a cup of coffee. Her flat was in a mess because she had her toilet renovated. New toilet, new tiles, new lights and of course repainting of the walls in white. But which white ?? Believe it or not, but there are so many shades ! As there is also a white inbuilt wardrobe in white,and the tiles in white, we had to find the same shade of white to match !

There was a slightly yellow white, a grey white, a blue white, a pink white, a creme white and a white white ! We looked at the card with the different shades, names and reference numbers. 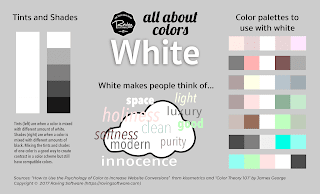 I immediately excluded a grey, blue and pink white, because grey looks dull, blue cold and pink is old fashioned. Nicole agreed. As she wanted the window sill in black tiles, and the other tiles were a very light white I suggested the white white which would match the tiles and the black window sill.

Nicole unfortunately has no imagination at all she needs facts ! I looked around and saw a little table standing there it was exactly the white I meant. So Nicole carried it in the toilet and held it against the wall to see if the white white matched the white of the tiles. Yesss ! It did, at least in my eyes.

Nicole belongs to those people who when they have chosen something start to hesitate, choose hundreds of other things and at the end come back to what they had chosen in the beginning, while I see something flash on it and don't change my mind anymore. Satisfied she put the table back and agreed with me. Good thing done.

When I came home I saw my usually white cat Arthur rolling himself in our red gravel ! After that his white shade was a pink white ! Even on Arthur it didn't look that nice ! 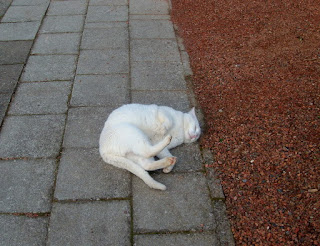 linking to Linda G Hills SOCS-Shade
Posted by Gattina at 07:00