Often after our painting course we are having lunch together and we all like a Chinese restaurant the Dynastie with the "all you can eat" formula for only 13 €. 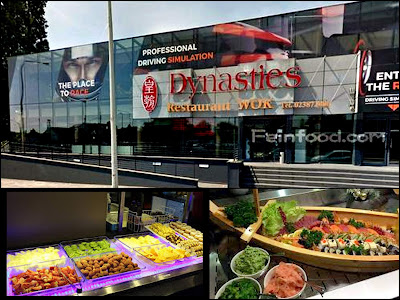 Usually when we are coming out we are almost exploding and we all need a little nap ! So was it last Thursday when we had finished our course and had cleaned the class from the pouring painting which had dropped on the ground and then we went to the Dynastie restaurant.

With the cold starters was a puree which one of us took for guacamole and served herself a good portion in a little bowl. First we didn't pay attention and when we saw what she had taken it unfortunately was too late !

She had taken pieces of fried shrimps and had dipped one in the "guacamole" and had put it in her mouth. Suddenly she jumped up, did some Irish step dancing with her mouth wide open and made strange sounds. Immediately we knew what had happened the "guacamole" was in reality Wasabi, which is very very spicy and burns as if you would hold a burning torch inside your mouth.

She spat what she had in her mouth on the ground, and then we gave her a plate to spit on it and water to cool her mouth. Tears ran over her cheeks and her eyes became red.   It took a while until she recovered. The waitress came and cleaned the floor and was very upset and sorry for our poor friend.

When everything was over we all had to laugh, it had looked so funny when our friend did her dancing and the other guests must have thought that too. I once had the same joke  but only with a little bit, it is really very spicy, but amongst my friends was one who ate it as if it was baby food !


Linking to Linda Hills SOCS - Ground
Posted by Gattina at 18:23

I think a lot of people's introduction to wasabi comes in the form of "it looked harmless..." The real stuff is strong enough, but most Japanese restaurants here use a blend of hot mustard and horseradish, which gets really hot...

I would avoid it!

OMG I feel so sorry for your friend! It must have been quite shocking to taste wasabi when she thought it was guacamole! I wouldn’t blame her for spitting on the ground...it was clearly an emergency situation!

While I like spicy, I don't like wasabi or radish. Years ago an older friend who did not like any spice at all thought she would be safe at a Thai restaurant if she ordered the chicken salad. She wasn't.

I do not care for very spicy food. I'm not sure what's so enjoyable about it. I think it deadens the taste buds.

I know just how your friend feels. At a party I helped myself to some salad with a good helping of sweet red peppers on top but they were chilli peppers. What a stupid thing to put on a salad. I don't like hot peppers at all.

Oh that’s funny ... but poor lady! Water actually doesn’t help too much with hot peppers, which I once took too big a bite of...a glass of milk was better to cool my mouth. I wonder if wasabi would be the same. ... I like wasabi mixed with soy sauce to dip my sushi in, but only a tiny bit at a time.

You made it sound funny but it must have been distressing for your friend. I wouldn't have coped with it either but I'm not a fan of guacomole so hopefully I won't be making that mistake!