MY CAT AND LEATHER SHOES

My cat Arthur loves leather shoes. It seems to me that the leather is acting like a drug on him. When my scrabble girls came on Monday, there was one who wore apparently very special shoes although they didn't look like. Arthur as soon as he saw her shoes, came to her and started to sharpen his claws on the leather and was very much surprised that the owner of the shoes screamed and threw her feet in the air. Arthur hesitated for a second and then probably thought I will wait until she puts her feet down. Which of course happened. He immediately returned and started to roll back and forewards on her shoes. He was really in love with them. 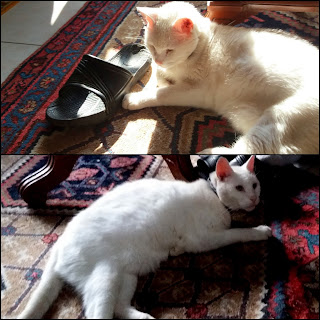 My friend had to laugh but also feared for her shoes and I suggested that she takes them off and I give her a pair of slippers. She took her shoes off and hid them behind her bag.

And while we continued with our scrabble, Arthur was looking for the shoes and it didn't last long and he found them, pushed the bag aside and pulled one shoe out. Fortunately before a catastrophe happened one of us saw him and took the shoe away. Arthur was not happy and sat there and meowed. I gave him some whipped cream to comfort him. 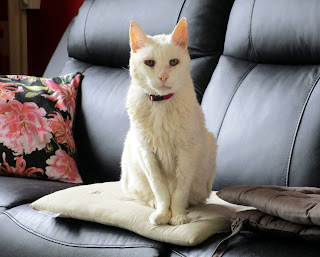 He kept us company the whole time and when they went away and my friend had put on her shoes again, he escorted her to the car, still trying to catch some smell from the shoes, so that she nearly fell over him and she had to walk like a storch. We all laughed, and I didn't say anything, because I know that she loves Arthur. Everybody does, he is such a charmer.

He was very disappointed that the shoes had gone and offended  he returned to his napping place in front of the heating. 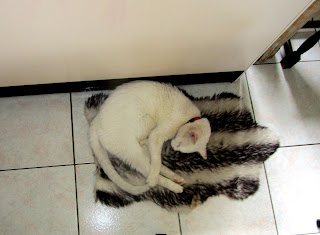 Linking to One liner Wednesday
Posted by Gattina at 01:44

How did the scrable go.
Coffee in on

That was so funny. Arthur is quite a character.

I'm sure she loves Arthur but none of would want our shoes ruined by him lol.