Scrabble took place outside on Monday, it was warm and sunny after a rainy morning. Nicole was for two days at the sea and another girl replaced her, so we were four. Instead of cake we had ice cream with melon cubes and whipped cream, that was really very good and refreshing.

The temperature climbed to very unusual temperatures and even moving one finger was too much. On TV they said it was the hottest day since I don't know when, because last year we also had high temperatures, but maybe the heat damages the brain and people forget. For that a blog is very useful, because I just go one year back and read my weather comments.

So what I did was ..... nothing ! I sat motionless with a bottle of water in front of the TV and watched my little crime stories. One played in Austria where it snowed, which seemed unbelievable too me ! 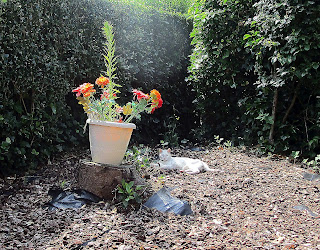 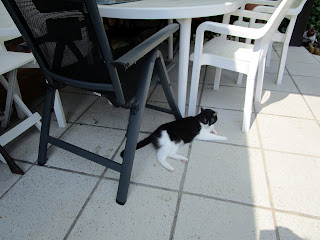 The cats prefered to lay lazily outside, Arthur the white in the sun, he got a sunburn on his ears and Rosie in the shade under the garden table. 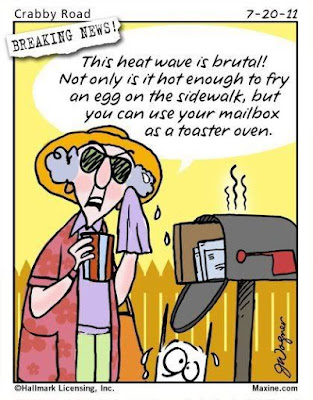 I think my mailbox too could do my toast for lunch ! 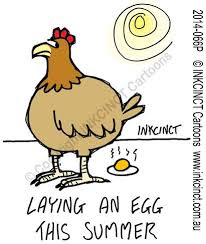 Unfortunately I have no chicken, I only had to hold the plate at the end of the chicken. 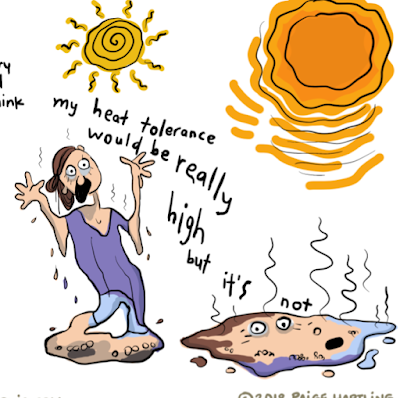 As for once the weatherman was right, I thought this will be left of me in a few weeks ! No funerals needed.

But as it is the next day it was cooler and Nicole had just escaped bad weather at the seaside and came back here into our slowly cooled down furnace ! Two "Hulk" like workers were there to install a second bathroom with only a  shower ! They really looked strong but were not green and despite the heat they worked very quickly and good. As Nicole has to stay home the first days to show where everything is, water connections, electricity etc I kept her company and explained again a little (at time) how to use her smartphone.

The heat came back and it was hard (at least for me) to paint something, I really had no inspiration. This time we didn't have lunch together because they all were busy. Myriam who has a swimming pool but not a big one had the honor of her grandsons visit with 15 (!!) friends who behaved like savages, hitting flower pots with a football, jumped all in the water (there was only half left) beer cans and bottles lay around, and holes burnt in the table cloth etc etc. The poor girl had said that we would go for the day to the sea so the grandson had invited his friends thinking that Grandma wasn't there, but she was ! Bad surprise and grandma was very very angry. She had allowed him to use the swimming pool but not with so many youngsters ! 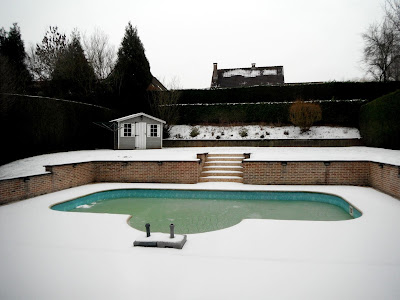 Didn't have a summer photo of the pool, it's only to show the size ! Imagine 15 youngsters of 18 years old in there !!

After the painting course she went home to see if they would dare to come back and I joined her to help her to throw them out. I thing I am quite good at that, she is too good and is not firm enough. But nobody showed up. These well educated young "men" are the victims of being their father's son, they get everything material except education and time !