HOW I LEARNED FRENCH

The first year in the French speaking school was awful, because I couldn't follow at all. The only class where I was very good was where we learned typwriting and I used to bash everybody out on a manual typewriter. 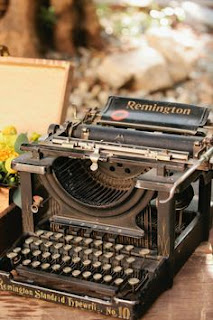 It looked like this, the keyboard was covered so that I couldn't see the letters. That way I learned "blind typing".  Fortunately later I didn't have to bash on the keys, I had an IBM typewriter with a ball, I typed so quickly that the ball always jumped out and rolled through the office. My peers complained because they all ran behind the ball and asked me not to type so fast. When I look at this typewriter today I feel like an antique ! What progress had been made since I started working !

The Business school was very famous in France and Belgium and located in an old manor house ! Our classes were in all available rooms which had been converted into to classrooms. Even the kitchen ! The house was high and narrow and we had to climb the old creaky stairs up and down to join the classes !

It was a rather old fashioned school in my eyes, because I wasn't used to uniforms at school, no school in Germany had uniforms anymore after WWII apparently they had enough of uniforms. But here the girls had to wear blue aprons ! I had never worn and apron either and found it very funny !  The students were all very nice to me and helped me with my language difficulties. 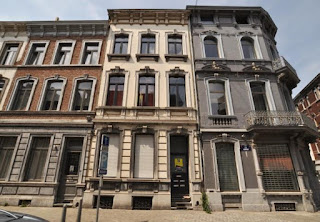 I head to repeat my first year because I had only learned French, but meanwhile I understood enough to follow the same class again and of course I had a better bash this second time !

The good thing was that when I had my diploma in the pocket I found immediately a job as translator. Companies were looking for German and English speaking people. The UK was not in the Common Market yet (today European Union) and it was difficult for them to get a work permit.

I wonder now, with the Brexit, how British employees will be able to continue working in Belgium they would need a work permit. They will probably be replaced by Belgians, meanwhile a lot had learned English. Of course it also depends on the position of the employee. I have heard in the News that 2700 British have already become Belgians because they have their life here.

Rather complicated re Brexit. I too used to type on a typewriter, and transferred my skills to being able to look at what I am writing without looking at the keyboard on a computer. But what about young people whose thumbs fly over their keyboards on their phones? We with our old typing skills are left way behind. I believe they are called digital natives. Good to know you do French, haha 😘

I learned how to learn French in Brussels as well. Not much as I was talking to a little boy of 15 months, but it gave me a bit of an ear for it, so when I moved to Italy for Club Med, my French came along quite well after that.

I learned to touch type as we call it on a manual typewriter. When I started work we had electric typewriters and I can remember going to test out models of word processors. Then of course computers really evolved and it seems we have never looked back. Can you imagine typists today having to cope without making any errors or having to go back and correct them? I really wish I had done more with languages. I did French at school and even a year of Russian but without using them they get forgotten. Immersing yourself as you had to do is probably the best way of learning a language.

Those IBM Selectric typewriters were great, weren't they?

I was in French immersion in school. Though I've become rusty because of lack of use.

I learned French in college but forgot a lot as I don’t use it. I may try to learn Spanish as it would be more useful here :-)

I love the part about typing. I used to use an IBM selectric too and thought it was so cool because you could change the ball from "courier" to "elite" for a different font. I typed fast but not as fast as you. The vintage typewriter shown here is pretty cool! (you could share this on sabi saturday if you wanted because of that awesome typewriter photo.)It was interesting reading about your experience at the Business school. so you became trilingual? French, German and English? That is so cool (I can only speak English despite a few years in Japan. I am not good at learning aurally so it was a handicap. much better visually).

This Brexit business is such a nuisance. But it's what they wanted.
Your business school sounds like an interesting place. My secondary school was in an old palazzo and we had spiral staircases and hidden nooks everywhere. I loved it.

Enjoyed your story! It’s wonderful that you had (and have) so many languages. I know no extra languages, but have in common with you the typewriting history. Learned in high school to “touch type” on a typewriter like you show, but with blank keys (and at first a large chart with the letters in front of the room, then that was taken away). Then in my first office job, also an IBM Selectric with that “magic letter ball”. One time, I thought my machine was broken because nothing showed up on the paper no matter how hard I bashed. Turned out I’d forgotten to replace the ball which was lying in my desk drawer. (I worked in a Title Company and there was a different ball with symbols we had to use, so you had to switch them back and forth; somehow I had gotten distracted between the change!). I was a pretty fast typist too (when the ball was in place). I actually had to learn to slow down a bit years later when the office where I then worked first went to computers. We sure have come a long ways! (And here this very minute I “type” using a stylus on my IPad while curled up in my easy chair. My old typing teacher always stressed the importance of good ladylike office posture and hand position. How times change !

I remember hurting my fingers on those old typewriters