The poor people who work the whole week always have an awful weekend, with a lot of wind and rain. It is due to the generosity of the UK who sent it over to France and Belgium. Thank you very much.

The result was that I answered comments, filed photos took some pictures of sleeping (of course) cats and watched "Miss Fisher's Murder Mysteries" of which I had recorded a few, as one Belgian channel broadcasted the series for two weeks.

Early evening Waterloo city had organized a one woman show for its seniors. Her name is "Bibot" and the title was "Bibot Posh" (Bibot Distinguée). 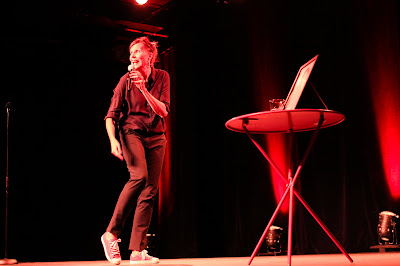 Usually I don't like one man shows (or in this case a woman) and was rather reluctant to watch the show, but as we were 5 I didn't want to make an exception on top I had thought it was a theatre play. So I was pleasantly surprised that the show was very funny ! It was not stupid at all and not political either, she made fun of daily life ! Organic sales, men, family, climate, it was too funny and we laughed and laughed.

The others had seen her already on TV she is a Belgian, but I had never seen or heard of her. 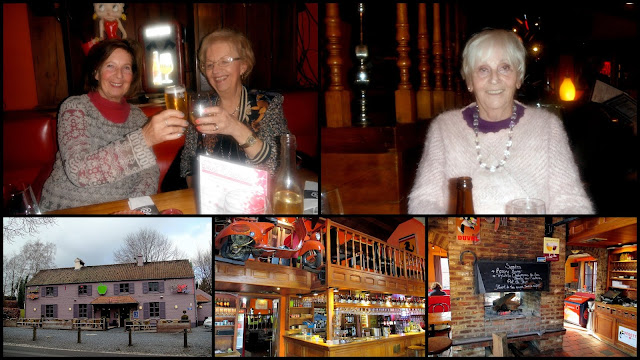 We ended the evening in "La Pomme" (The Apple) a Brasserie, Pub, where we had very good Spaghettis. The Restaurant was full and we were lucky that we found a table.

On Sunday I heard the rain beating against the shutters and the wind howled around the house. Nicole and I wanted to go to the market, but that was impossible the stands were probably not even there because of the strong wind.

So I spent the day looking for a massage cushion, and other things on Internet, and made plans to paint my dark brown furniture (English style) into white. I had seen pictures. I am so fed up of the now 50 year old furniture, but I don't want to spent a lot in new things, it will anyway end on the flea market because nobody wants it. Young people have other tastes. Anyway I had seen one cupboard which Nicole had painted in white and it looked terrific ! But for that I have to wait until the weather gets warmer and dry, to paint on the terrace ! or at least leaving the windows wide open.

I continued with Miss Fisher and thought how beautiful the dresses where  around 1930 and how emancipated this young woman was ! 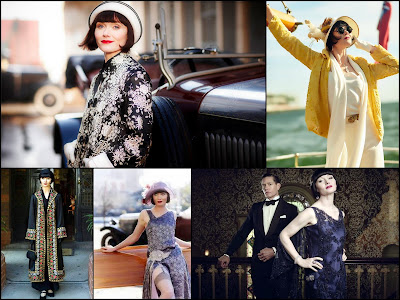 I think even today we could wear these dresses !

And then another day was over !
Posted by Gattina at 07:00

I drove on Saturday and the wind was just beating our car. Fortunately not much rain until yesterday.

I wouldn't mind trying out different styles of clothing sometime. I think it could be fun.

One man (woman) show is usually what we call 'stand up comedy', and can be quite entertaining as it deals ,in a comic manner, with everyday life. Where I live, it's quite a popular genre.

I'm afraid, painting from dark to white is not such a good idea. At least, in my experience. The opposite is quite easy and usually successful.

Well of course we like to share our weather (even if we don't want anything from the EU!) An outing that turns out better than you expect is always a nice surprise. Staying in when the weather is bad is definitely a good move. I'd definitely wait until you can paint the furniture outside or at least have windows and doors open. Paint smells in a confined space not a good idea. Look forward to seeing before and after photos though.

It sounds like that act was indeed stand up comedy.

We had lovely, sunny weekend but the wind is howling here too tonight. But it's nice and warm inside so I don't mind it at all.

Glad you enjoyed the one woman show. Lots of comedy shows are too political and it must be nice to enjoy the show politics-free.
I like dresses around 1930 and I agree, we can wear them today - good clothes are really timeless!

It's a nice surprise when you don't really want to see something and it turns out to be very good. You are the second person this week to mention Miss Fisher, the other in the US. The show was mostly filmed here in Melbourne. I hope this link works. Miss Fisher's house

I saw that series was on netflix and have been thinking about trying it ...with your recommendation, it’s going on my queue!

I love to laugh