When we stopped at Drumcliffe, which is set against the striking backdrop of the Benbulben Mountains, I didn't really understand why we stopped here ! The reason was because here was the final resting place of  W.B.Yeates (1865–1939), who is buried in the graveyard of St. Columba's Church of Ireland church. Although Yeats died in Roquebrune-Cap-Martin, France in January 1939, his remains were brought home to Ireland by the Irish Naval Service and re-interred at Drumcliff in 1948 in the presence of a large number of local people and dignitaries which included the Minister for External Affairs, Seán MacBride, who represented the Government. 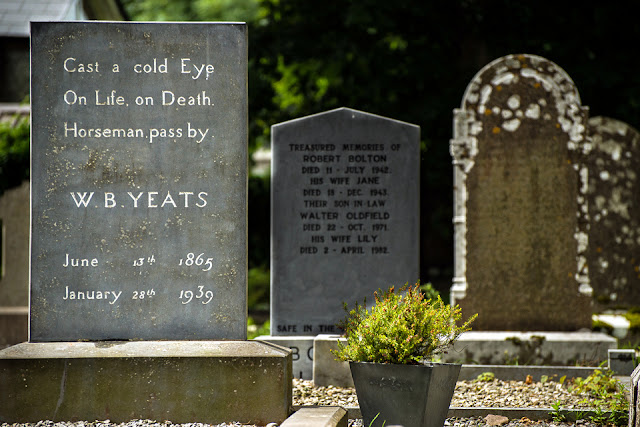 
When we arrived in Galway, we were lucky, the sun was shining and the city had such cheerful vibes !

Even from the bus I saw brightly painted pubs heave with live music, and restaurants and cafes with front-row seats for observing buskers and street theatre. Remnants of the medieval town walls lie between shops selling handcrafted Claddagh rings, books and musical instruments, bridges arch over the salmon-stuffed River Corrib, and a long promenade leads to the seaside suburb of Salthill, on Galway Bay, the source of the area's famous oysters.