We should have gone to Amsterdam on Saturday to celebrate our grandson's 6th birthday, but unfortunately I am still handicapped with my sprained ankle. I can walk although not too long but climbing stairs are painful and in my son's house there are 3 floors with stairs ! 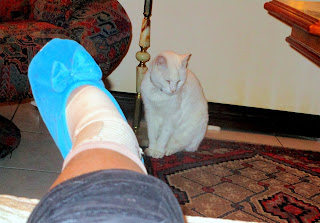 Arthur isn't very impressed, as long as he gets fed. 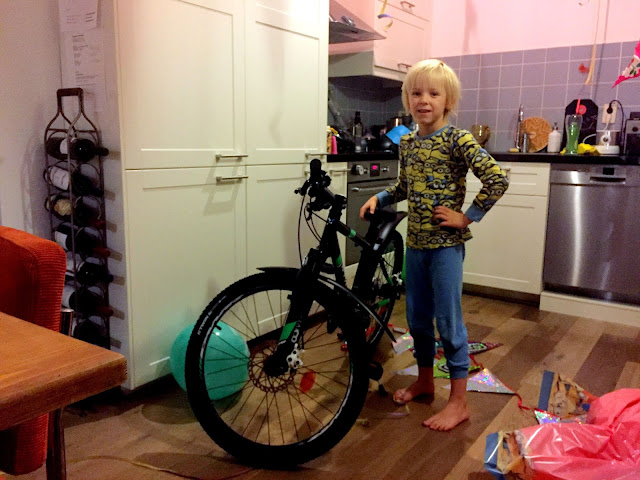 For his birthday he got a bike from us, but chosen by my son, and unfortunately it was a little too big, so Toby has to wait a bit until he can use it. He is already very tall for his 6 years but not enough for the new bike. Apparently he has celebrated in the morning with his school class and the afternoon with the family.

I didn't go out the whole day because we had a stormy weather and rain. But at 5 pm we had a theater play organized by the city for the seniors. I went with Nicole, but she had a problem. There was a reconstitution of the Waterloo battle with canon shots and Charlie got hysterical. He is so afraid of shooting and thunderstorms that he demolishes carpets, cartons, he scratches as if he wants to dig a hole in the floor and he trembles like a leave in the wind. Impossible to leave him alone, because he could get an epileptic attack. Nicole called and asked Mr. G. if he could babysitter or rather doggysitter Charlie, because we live farer away from the battle field and can't hear the shooting ! Mr. G. agreed of course and Nicole came and left him here. 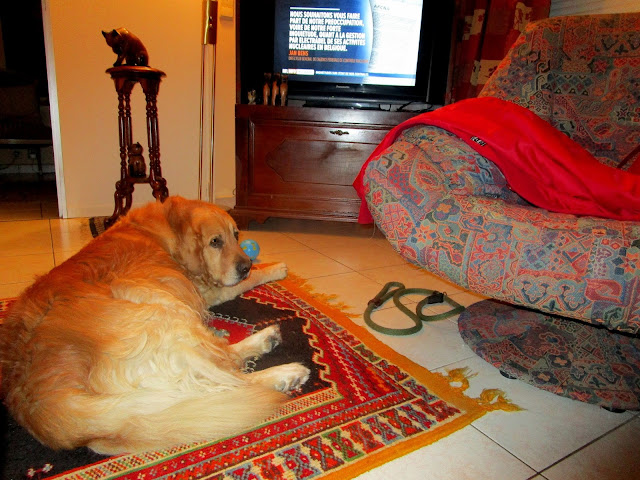 The cats disappeared except Pookie, she remained on the sofa and slept. Mr. G. and Charlie watched TV and ate Grisinis. When we came back from our play which had been very funny, they were peacefully sitting together and enjoyed each others company. When Nicole wanted to go home, Charlie sat down and refused to go with her, he wanted to stay a bit longer ! Finally we managed to get him out of the house ! 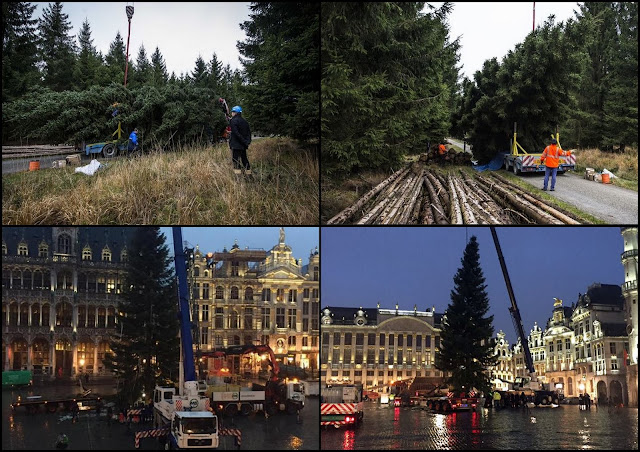 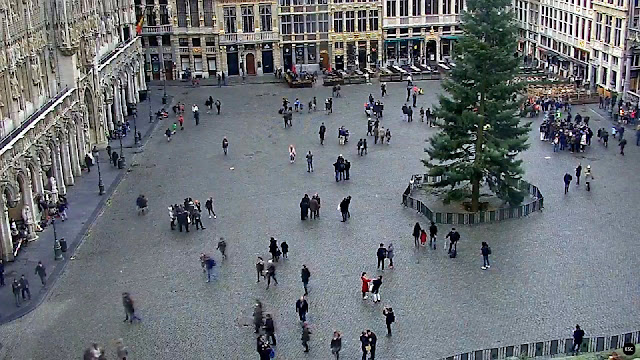 As I haven't seen it life, I took a print screen of the webcam which is installed on the Grand'Place.

The whole weekend there was a very strong wind which caused a lot of damages, fortunately we had nothing not even a blown away flower pot !
Posted by Gattina at 07:00

Hi Gattain - sorry the foot's still so sore - but at least you got a photo of Toby and his bike - he'll be in that very soon ... I remember growing so fast.

Weather is 'fair windy' and wet ... to put it mildly ... take care and ease that ankle along - cheers Hilary

It is strange how some dogs are like and others act as if nothing is happening. We call the doge, or some of us older people do, gun shy, because the sound of a gun can set them off, even just rifle.

A live tree for Christmas. What a great gift from Slovenia. What to they want from the Netherlands?

I love the wind blown woman.

That certainly was an impressive tree. Shame the bike was little too big, but he will grow into it so still a good gift. Hope your foot is on the mend.

Sorry your foot is still too sore. At least you missed climbing all those stairs. Eddie reacts like Charlie with thunderstorms; the funny thing is here in the mountains we are in the lightening corridor. Although where we lived in the Free State, the storms were just as fierce, and Eddie would go crazy with fear, here she is alot better. Sometimes not even shaking or panting. Will your foot be better for your departure on Saturday?

How sad that you missed celebrating with Toby. Better to be sensible that to make your injury worse. Why does Slovenia give Brussels a tree? I am going to Ljubljana, the capital of Slovenia, for a weekend in December.

I'm sorry you couldn't go to celebrate Toby's birthday, but that's a great picture of him with his new bike! I'm sure he will grow enough to ride it in no time :-)

What a shame you missed your grandson's birthday but I'm sure he will soon grow into the bike. That tree is very tall. Will they decorate it? Lucky you have a willing dog sitter.

Hope you ankle feel better soon. Arthur should be taking care of you. That's a shame that you had to miss Toby's birthday.

I do hope your sprained ankle gets better soon. Your grandson is adorable; such a fun age as my grandson is seven. I love Amsterdam as I visited a few years ago. Recently, I visited Bruges and fell in love with the city. Sending you my best wishes, Pat xx

Lucky Charlie to find such a willing dog sitter.

Well, at least they didn't put up that awful tree from a few years ago: the modern art one? It was horrid!

Hope the foot is getting better.
Our little dog was afraid of everything but he'd spent a good amount of time feral in the city. He was pretty beaten up when we got him.

Our grandson traveled to Slovenia this past summer ... his girlfriend is from there. He said it was kind of like Oregon with a lot of forest land. So that was interesting to see your donated tree from there.