January is a dull month. There is nothing going on and if you don't want to run around in Boutiques or more intellectually going into a museum, there is nothing interesting left. Fortunately I have my blogging. Sometimes we just need to get out of the house and that's what Nicole needed too.

So we went to the Carrefour's Lunch Garden together with Charlie. When Charlie is with us everybody talks to us and that's quite entertaining. 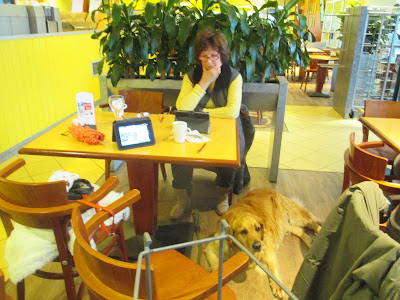 We had brought our tablets and were reading our emails and then looking for holiday propositions. Charlie lay bravely on the ground and waggled with his tail when people smiled at him. And while outside it rained and there was a lot of wind we first enjoyed our meal and then later coffee with a piece of delicious cake. Chatting with people brought us suddenly to 4 pm and Nicole almost missed an appointment. A group of young men admired first Charlie and then us, because they found it so nice that vintage ladies handled tablets and they complained that their grandmothers refused all "modern" stuff. We had a real nice conversation.

Sunday late afternoon I went with Nicole to the cinema. Last week we had missed the film we wanted to see because it was sold out. This time we bought the tickets immediately after our arrival and then wanted to eat a sandwich. As it was Sunday everything was closed in the Gallery even the cafés, restaurants and snacks ! I had never been in the gallery on a Sunday evening. It's just dead ! Usually it's full of people there are many boutiques and restaurant and other shops, but besides people like us there were only those who also went for the cinema. Finally outside we found a Sandwich in a café.

The film with the nice title "Le grand partage" (the big share) could have been real nice. The story was that the French government requisitioned big apartments in Paris and asked the inhabitants to share their home with the homeless as the winter was extremely cold. Of course this gave hilarious situations, but there was something missing. It was just a film where you laughed from time to time but it was close to ridiculous. The fine, tender humor was completely missing although all the ingredients were there. We were very disappointed. 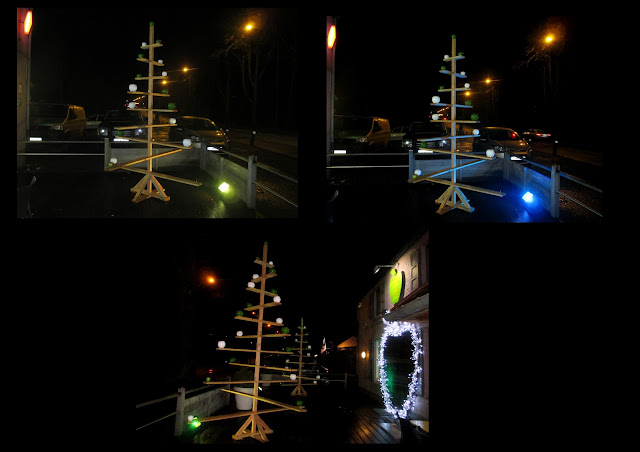 Last week I hadn't noticed these funny Christmas trees with real apples !
Posted by Gattina at 07:44