1. The weather had cooled down and it was real nice to sit outside with my computer and do what I had to do. 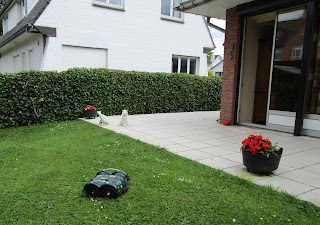 Meanwhile Oscar mowed the lawn and cat Arthur watched it from far.

The school holidays  will be finished at the end of the week on a Friday (!!)  so it's better to stay home and let parents do their last shopping. Each year it is the same, it is a big event here and in the news every evening.

2. Ilona came for a visit and after having sat on the terrace for a while,  I called Nicole and we met in our Brasserie "l'Orangerie du Prince" for a drink. Dog Charlie of course was there too and was looking for the cows.

3. This time they had gathered all old coaches in an old barn. 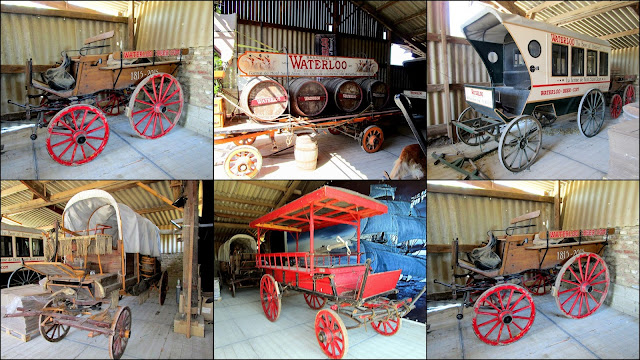 They were just parked there and I don't know yet what they will do with them. They are probably for decorating the place, as it was a huge farm with lot of land around.

4. Long time ago Mr. G. had done special programs for a Karting company. He had told about that to a friend and she had said it to her two grandchildren. 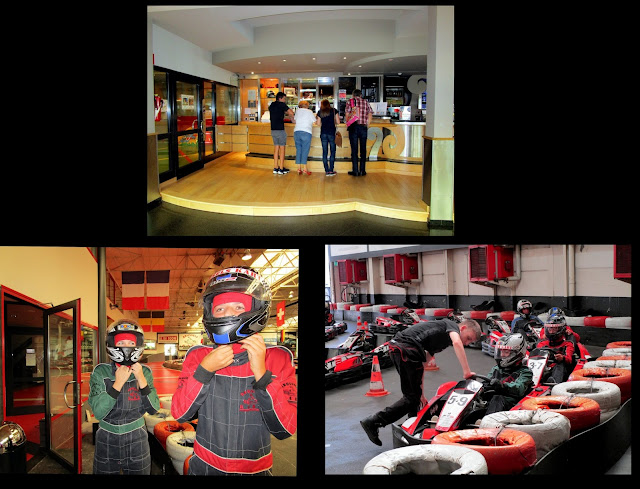 Of course they wanted to go ! So we went all together, Grandma, a girl of 20 and a boy of 13, and had a lot of fun. We watched them from the restaurant, racing by. I took a lot of pictures but most of them came out blurred. 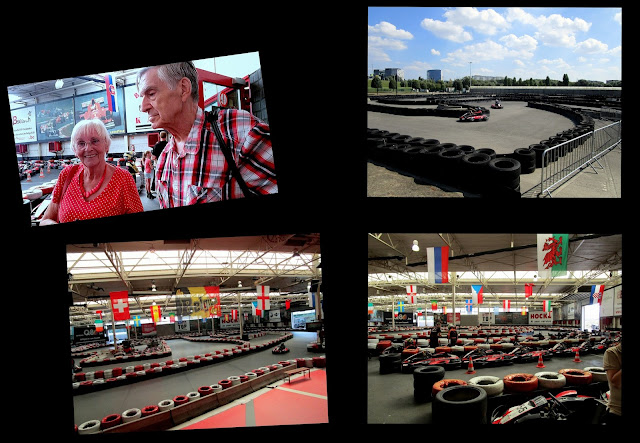 After the tour we had a drink and then returned home. The two teenagers were very excited about this adventure.

5. I had to get up early because my cleaning lady arrives around 7, and after having done my shopping, we had lunch and then I wanted to watch a little crime story. Apparently I fell asleep, because when I woke up the crime story was long finished and there was a stupid program going on. It was already late, so I planted my fake flowers I had bought in the morning in the pots where the fresh once had fainted and now it looks nice again. Everybody compliments me on my beautiful flowers !

more participants here at FIVE ON FRIDAY
Posted by Gattina at 06:30

Hi Gattina - love the carts .. they look well preserved. Hubby did them a big favour with his programme. Sounds like the outing was great fun - cheers Hilary

A great collage of old coaches!

Those kids would have loved that karting adventure. Hey you 're cheating with the flowers. Way to go they don't need much looking after. Love your fungi header.

I think artificial flowers might be the answer to my problems.I never was much of a gardener.

Oh i just LOVE all those old farm carts!! how fun!!

and to go watch your grandchildren ride the go-karts....that must have been fun.

I go back to work (school) on Wednesday and my youngest daughter who is now in her last year of high school goes back on Sept 8. Life will become busy again!!

So nice of your hubby to add to the knowledge of the farm carts. Fun post -- a little bit of everything. I bet the kids did have fun with the go-carts. Have a fun week!

I've seen vacuum cleaners like Oscar, but never a lawn mower! How cool is that!

Love those old coaches. They would make a good decoration!
I loved go-karts as a child. Sounds like the kids enjoyed exciting time :-)
Have a happy weekend!

The go cart trip sounds fun and those old carts are interesting. Our weather seems to be on the change this weekend but we have had a lot of sun. I like your lawnmower but I wouldn't want to be up at 7 am for my cleaner! Enjoy the weekend.

Go carts are fun, you should have tried them too.

The go carts look like really good fun - the old carts too but I guess they would be much slower!

Soon Summer will be over but your flowers will still be looking good.

What a nice collection of old coaches! They could probably make money selling them, but they'll be nice for decorations, too.

Neat idea to replace the faded flowers with fake ones for the winter!

Those wagons are all so interesting. Co-karting is a lot of fun but at this stage I'd be sitting and taking photos instead! Have a good weekend.

I know I would of enjoy it all.
Coffee is on

So curious about those carts. I hope you'll let us know what happens to them. With photos, please.

I love that you planted your artificial flowers! I did that some years ago with some silk poppies that I had in a previous house and didn't have a home for any more indoors and everyone loved them! It is a great way to add a splash of colour at this time of year isn't it. Thank you for joining in, have a great weekend! xx

I love the nostalgia of old coaches and imagining the people and fashions that have sat and ridden along on them. A great five! Have a great weekend xx

Just think of the things those old carriages have seen! They look very well preserved. Great idea to use artificial flowers and fool everyone! Happy weekend.

What fun for the teenagers! And they were able to race around before the back to school shopping trips and the first day of school.
Love those old carriages--if only they could talk...
Ha! So the fake flowers are fooling everyone?

A touch of the old and the new...loved seeing the old coaches, and what fun to get to go go-karting!

beautiful photos! hope you can visit our blog too! Thanks and have a nice day!

My kids loved the karts at that age and still like them. I should look into and Oscar for my mom. He seems to do a good job with that lawn, but maybe that's because he's under the watchful supervision of Arthur the cat.