In 1960 I finally finished highschool and got my certificate. Now I had to leave the German school and Brussels and asked myself what to do now ?

My classmates had all returned to Germany to start different studies at university or other schools. but I didn' want to go back. I had one Belgian girl in my class and she of course stayed also  here with her parents. She told me she would go to a business school and learn commercial correspondence, marketing and business management.  I thought it was a good idea.

My father agreed immediately, he was relieved that I had found something, anyway in his mind I should rather find a wealthy husband and wouldn't really need to study.

The school's name was "Ecole Pigier" and turned out to be poshest business school in Brussels. I realized that because all students were either sons or daughters of big company owners, who should take over once Daddy's business. The offsprings weren't intelligent enough to go to University so the Ecole Pigier was the last solution to get a nice diploma and start in Daddy's business.

I only found interesting that the boys had all a car which was quite unusual in 1960 and mostly lived in huge mansions with tennis court and swimming pool, which was a big advantage for me !

The first year I didn't understand very much because I didn't speak or write French. But with the help of tennis courts, swimming pools and riding around in sportscars I learned French rather quickly. Now I could think about really starting my studies. It wasn't very difficult and after two more years I had my diploma for commercial correspondent in my pocket and also a first price and an award in typing ! I was the quickest typist of the year ! 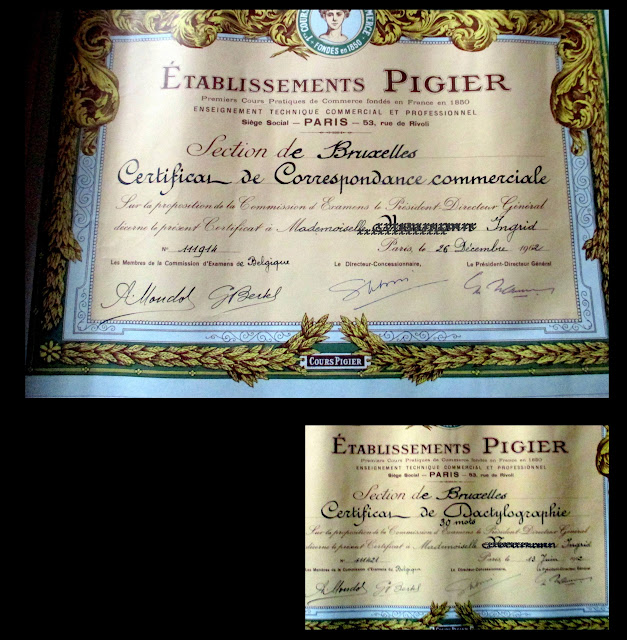 My diplomas looked quite impressive, unfortunately they remained in my drawer ever since, nobody ever asked me for diplomas ! I usually was hired immediately. At that time there were not so many people around who spoke German and English and that's what the companies were looking for.

The "Ecole Pigier" was in an old big house once inhabited by a wealthy family. It was rather narrow but had 5 floors. It had been converted to a school, but there were still remains of the original house, like the open fires and and wooden ornaments. Sometimes I wondered who had lived in this house.

I had a nice an interesting time at the Pigier school and when I left I had made a lot of friends, with whom I stayed in contact for a while. And then as life goes on, we all started to work and slowly lost contact.

"tennis courts, swimming pools and riding around in sportscars I learned French rather quickly." So that is how to learn a language.

It is strange how friends drift apart. Neither of you mean to end the friendship but it just happens. I think like all relationships, you have to work at them.

Hi Gattina - interesting to look back - and what a good move the Ecole Pigier proved to be ... what fun at the time - even I might have learnt French if I'd followed your route of learning!! Cheers Hilary

Nice story, sounds a bit like mine. I went to a "receptionist"! education also in a former home building. The only thing a really learned was typing and I was very good in it, like you. Speaking, french, english and german, I had learned at highschool already, so it was a rather boring education. I worked for a very short time as a receptionist and than became a correspondent at a magazine publisher for years. The opportunities for girls were not that great in the sixties, many went the same way in offices.

An interesting snippet of your life's story. I like Andrew's comment. You did lead the high life in your college days.

I love the way that "on the tennis courts, in swimming pools and riding around in sports cars, you learnt French quickly"! I'm impressed. Yes, I would also wonder who had lived in that house before it became a business school!

It sounds like you had some wonderful friends and a very interesting social life!

It was so much more difficult to keep in touch with friends then. With no email or mobile phones we had to rely on letter writing. I don't know about you but I changed my address frequently in my college days and first few years of work.