1. I got an sms that I could pick up my computer which had been repaired ! It had lasted more than a month to replace the keyboard, with the result that it is exactly the same like before, the same letters don't work. I have to hammer on the "n" or "y" and then it would work, but each time I start my computer it's the same story. So I have to go back, which means that I will be without computer for another month !

2. Dominique was with me and we took the opportunity to have lunch in the restaurant there and had a delicious plate of mussels with fries !

3. Nicole's new bathroom furniture had been installed and after some shopping together she showed me her new bathroom. It looks beautiful and she is very happy. Dog Charlie brought me his toys and then lay down to listen to our gossips.

4. Ilona had invited me for tea and for the first time this year had lit a fire in her wood burner. It was very cozy to watch the flames and it made me a little sad, that summer is now over and that the last time I had been here with her, we sat in the garden and enjoyed the warm sunshine. And that was only 2 weeks ago !

5. She also had a lot of clothes to give away so I took her to the shop where they sell all kind of stuff for the benefit of battered women. It's a kind of Charity Shop. We only want to get rid of clothes and didn't intend to buy anything, with the result that we both found a beautiful winter rain coat, I in beige, Ilona in black ! 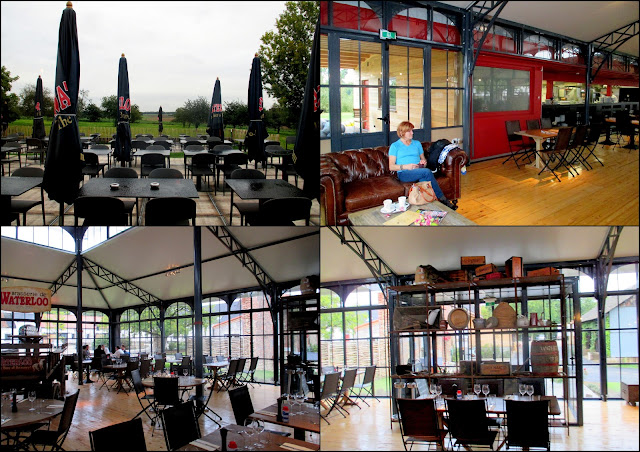 Happy with our bargains, we had a coffee in the old farm, which once had been the hospital for wounded British soldiers during the Waterloo battle in 1815. It was a pity that it rained outside because the place is really beatiful looking over green fields.

Its good to go out to lunch together .Bad news about your computer. I'm having a similar problem with my camera lens.

At least you have a new coat for the rain. What a nuisance about your computer, just so frustrating.

That's frustrating about the computer! Hope they fix it right this time.

Sitting by the fire with tea sounds cozy.

What a neat find in the raincoat! That place looks like a lovely place to eat.

Oh, no; I am sorry to hear about the still broken letters on your keyboard. That must be so frustrating. I hope they rush this order and that it doesn't take another month.

That would be so interesting to have coffee in the Old Farm. Sorry about the rain. ;( We won't have rain for another 3 weeks or so.

I had to smile when you said Charlie brought you his toys and then stayed near by to hear your gossip.

Well, I hope you're not another month without your computer merely because of a keyboard! Seems very strange...

I love it that you and your friend don't miss any opportunities to enjoy wherever you are with a meal and something fun to do. Hurray on a nice new rain coats!

Fun that you not only took clothes in but you came home with a good bargain too. The old farm looks like a lovely place to have a coffee in spite of the rain. That's too bad about the computer issues. Those kinds of things are very frustrating.

I hope that they will fix your computer soon. Life can get very frustrating without it.

I think sitting by the fire sipping tea is a lovely way to spend an afternoon. And that shop where you bought the coats sounds like a great bargain place.
I hope you get some sun this week!

You need to take your computer to that priest for a blessing, LOL!!!!!