MY WEEKEND OF MAY 31

On Saturday I went to the charity shop for battered women. Outside the shop I saw dog Charlie sitting there waiting for his mistress. I asked him what he is doing there when Nicole came out of the shop. She had brought a load of books and tableware for the shop. As the sun had come out and just in front of the shop is a big park, we decided to go there for a walk.

I think I haven't been in so many parks for walks in the last 5 years then during my whole married life ! Mr. G. hates to walk in parks and only did it reluctantly when our son was a little boy. And even then I had to pull him out of the house. Some people think that I am a widow, but I reassure them that it is not the case, it's only because my better half prefers to stay home ! 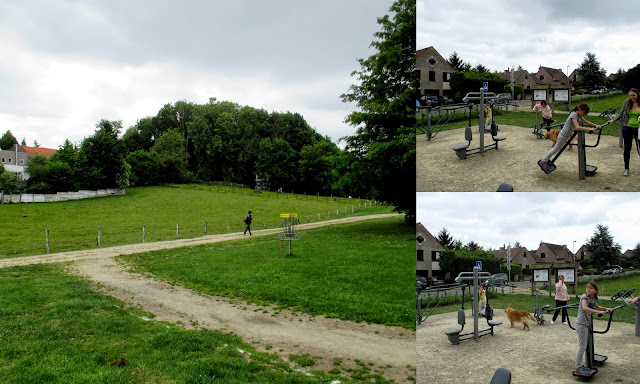 In the park were some sport equipments and Nicole and I tried some out. 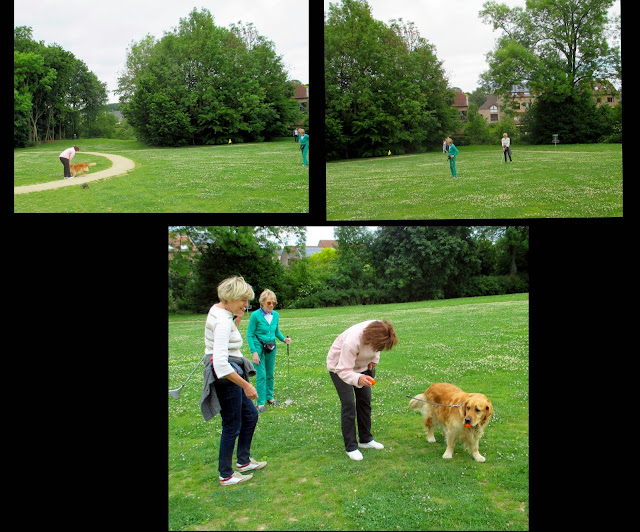 Then we watched some ladies playing "Swing Golf" it's a golf play but with colored balls and different golf clubs. It's played in some parks with existing holes and little flags. When Charlie saw the little red ball he ran off and caught it ! Now we were 5 to try to convince him to give the ball back ! We had no cookies to get his mouth open and take the ball. Finally a lady threw a second ball for him which he also wanted to take, let drop the other one and after 3 trials we finally managed to get the ball and give it back to the ladies. Fortunately they all found it very funny and we laughed and laughed ! 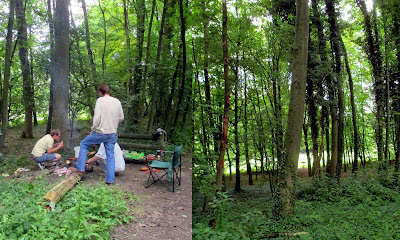 A little further in the woods some young men were preparing a barbecue ! Also something for Charlie who smelled the meat ! We had to pull him away from the plate and the young men laughed and invited us for the barbecue. We declined this friendly offer it was 3 pm and we really weren't hungry. Charlie wasn't happy. We ended the nice walk with a drink on Nicole's terrace. 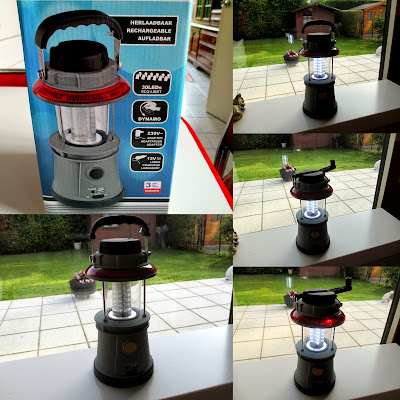 I bought a wireless lamp for our terrace if ever we sit outside when it is dark. It first has to be charged on electricity, but then you can charge it by turning a handle like a dynamo. Very practical in case of a electricity break down !

Sunday morning I went for a little walk through the market in the next little town,

I didn't want to buy anything but then came home with a cute little purse, perfect for travels ! It is compact but has enough room for all my stuff.

I love to watch the weekly report about the Royals in Europe on TV on Sundays, that's part of my romantic soul. At least it's not about wars or murders but something cheerful and relaxing to watch. This time they showed our new King participating in the  "20 km of Brussels", which celebrated its 35th anniversary. It had started in 1980, there are participants from all over the world (race history). He wore a blue T-shirt and was very brave, while the Queen and their 4 children watched Daddy running. They are very close to the population.

I continued to read my book on my Kindle in the garden, but after a while had to return into the house it became too cold.

Labels: 20 km of Brussels, King Philip of Belgium, My weekend of May 30, park, sport equipments

More interesting parks for you to walk in with something for everyone, even balls for Charlie to play with.
Does your new lamp also keep mosquitoes and bugs away or don't they live in Waterloo?
A weekly TV report about your Royals? Wish I had that about my Royals.

Ah Charlie, is SUCH a sociable fellow! I hope I meet him one day! We also get the cordless lamps here. I think you charge them electrically first and then in the sun. Although I've heard that the sun works quite well to charge on its own too. Which helps the many people in Tanzania who don't always have electricity. That king will endear himself to the nation showing his sporty side. I wish you a SUNNY week ahead! Jo

Ah Charlie, is SUCH a sociable fellow! I hope I meet him one day! We also get the cordless lamps here. I think you charge them electrically first and then in the sun. Although I've heard that the sun works quite well to charge on its own too. Which helps the many people in Tanzania who don't always have electricity. That king will endear himself to the nation showing his sporty side. I wish you a SUNNY week ahead! Jo

Oh Charlie! You are the one for making friends.
Gattina, I love walking in parks and hiking wherever. I'd have enjoyed your park adventures.

I like all of your adventures with Charlie. He is so cute.

Looks like a fun weekend. Thanks for sharing it with photographs.

Every day is an adventure! A great weekend. I never exercised or walked outside or anything (if I could help it) until I met my husband. He taught me to love the outdoors. But now he can't walk as far or as fast as I do, so we are adjusting to this new Chapter. Life never stops changing.

Ah such is life. I think Mr G would enjoy an electric scooter to go to the parks. I know when you have pain you dont enjoy as much as you would like to. My husband got me a scooter and I am enjoying it.
Your friend is so nice to donate to
donate books. I love watching the royal families and how they live Glad yours is doing nicely.

Parks are necessary for us. They are more or less the lungs of the town. Thanks for your visit.
We also watch Royalty ,but on Saturday.BTW our Royalty is protestant since the 80 years war from 1568 till 1648 when we became an independent country free from Spain. We got freedom of religion and. it resulted in an ecumenical cooperation in many places. We use each other's churches from time to time. It has nothing to do with Jehovah Witnesses, which is a religious sect, almost alien to what we believe. Interesting to say that we started the Celebration of the Spirit in an Ecumenical Church and
we had a wonderful time together.

Great cause and wonderful shots.