CRUISE THROUGH THE ANTWERP HABOUR

Each year in June Waterloo city organizes a trip for all seniors from 60 years on. This year the trip took us per bus to Antwerp, and then we went on a cruise ship for lunch, made a tour through Antwerp's habor while having lunch. Together with Nicole and another friend we went on this trip. 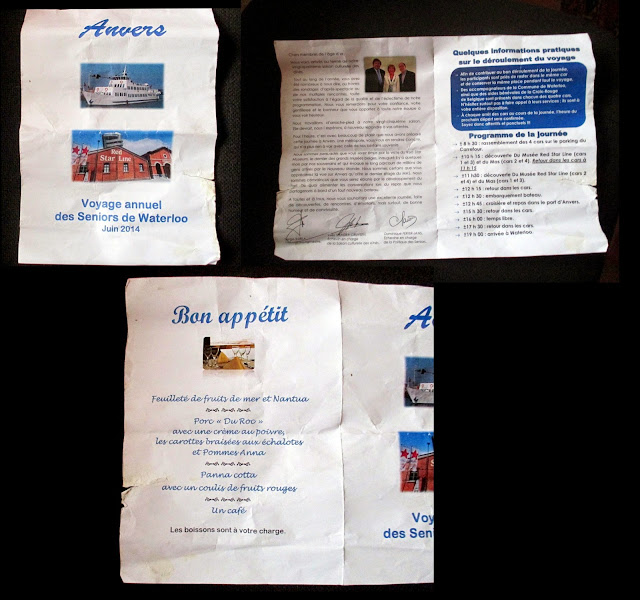 This was the invitation and program. The lunch was excellent !

First we had a Sea food pastry in a Nantua sauce  is a classical French sauce consisting of a Béchamel sauce base, cream, crayfish butter and crayfish tails. Then a slice of pork in a pepper creamed sauce, vegetables and a potato cake. As desert we had a Panna cotta which was delicious. 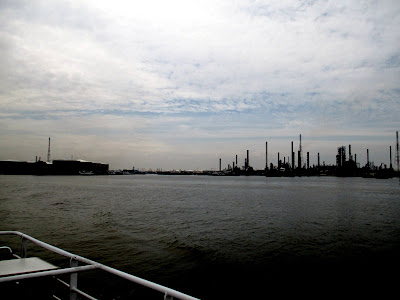 The views were not so nice and I couldn't take pictures 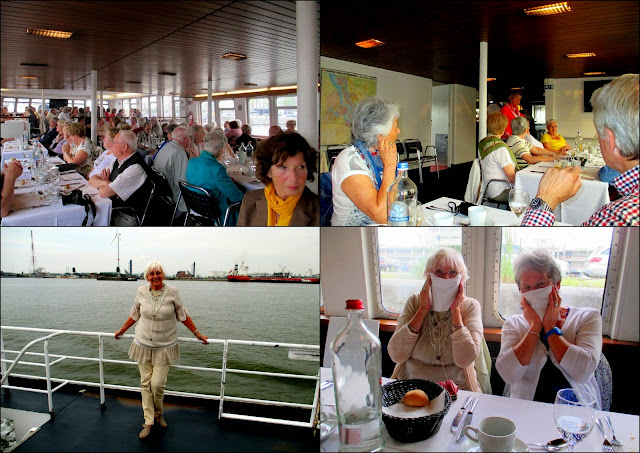 because we were all sitting under deck, and the windows were so dirty. There was no air and we had a place probably above the engine, because there was a terrible petrol smell. It got a little better while we were navigating, but as soon as we had finished the second plate, we went on deck in the fresh air and took our coffee and desert with us ! That was the best part of the cruise. 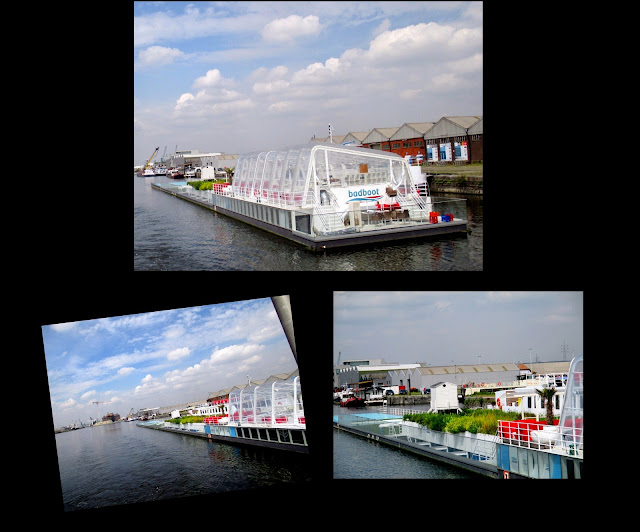 Besides huge petrol and cruise ships which were anchored there to be repaired and revised, there was one interesting ship you could rent for birthday or wedding or other parties. There was even a swimming pool on board. 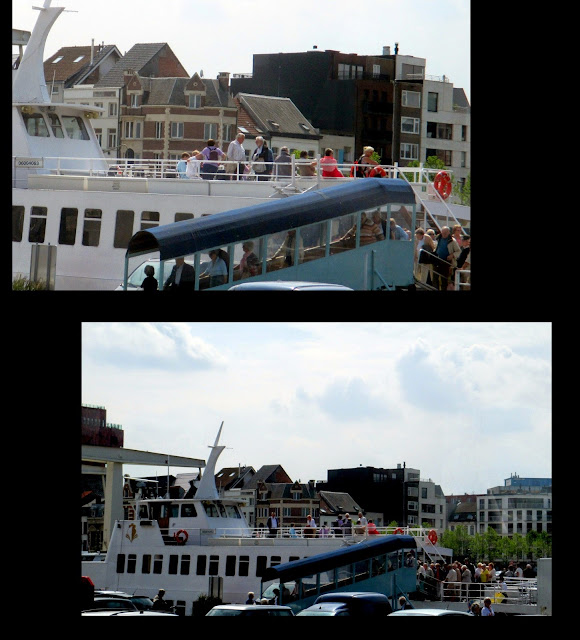 After two hours on the ship we left it. I thought that people our age wouldn't behave like a school class, but I was wrong, people pushed you aside and it was "Me first" for most of them as if the boat would leave without them. As it is the use to have wine at table, white for fish and red for meat, some of them were very cheerful and a man had fallen asleep on a chair and had to be woken up. We all laughed. It was still better then last year were I wasn't on the trip, one got lost and missed the bus, and the police found him peacefully sleeping on a bench in a park. He returned by train !

Then we had a free time in Antwerp before we returned to our buses and went back to Waterloo.

Yum, the menu looks delicious. Glad you could later enjoy the "afters" on deck away from the fumes! Yes, I think as people get older they revert to their teens or even younger!

Hi Gattina .. sounds a lovely day out - but the weather wasn't that kind - yet that's the way of the world with our weather! I am not happy with diesel fumes .. and would definitely have gone upstairs and into the fresh air as quickly as possible ..

The menu made me hungry,seniors here always seem to get fish and chips and no wine.

The thing I always found most fascinating was the noise! Everybody chattering and talking at the same time. It was like being in a chicken coop! It was always great fun though and I usually was allowed to come aboard as well, having a free lunch and a free trip!

Pudding on deck sounds great and the menu looks amazing, we always said it's hard to get a bad meal in Belgium!
Now tell me, I remember Antwerp for it's diamonds, if you went shopping whilst there you would have covered your D post for next week already which would be a win-win!
Have a great week
Wren x

At least the food was good and you had fun. I can't believe they actually lost someone last year!

Sounds like a fun idea that needs to be executed a little better! But it also sounds like you still managed to have a good time…

That sounds like so much fun.
I always thought living on such a boat would be a wonderful thing.

We also have dinner cruise ships here and it is so much fun especially around New Years.

HI there, I lived in Tervuren from Aug 2004 to Dec 2010. I'm back in Northern Ireland now but often miss things like the lovely Tervuren roundabout. Reading about your trip to Antwerp was rather nostalgic.

Gosh that is a very nice seniors cruise., the food sounds elegant, though not the petrol. The deck was a better choice! We laugh at the way the people where we live in Florida are always early for parties and picnics at the clubhouse, like they're afraid they'll miss the meal if they aren't first in line. Old people, honestly;))). Good thing you and I aren't there yet ))

That would suck to be with little air and a diesel smell while eating. At least you did not take the cruise back to Waterloo. :-)

The icky air sounds terrible, but the scenery looks wonderful.

I know I would have enjoyed being on deck, no matter what the smell. Hope you had loads of fun! {:-D

Your photos are lovely and the deck would have been a delight, sans the smell! I always treasure a visit here as you share such interesting and fun events in your daily life. Have a good week and enjoy!

It looks like you had a great time! The pics are so cute!

I really admire you!

You just get up and go!

And take the fun with you wherever you are!

What a charming cruise!

And such a cute link for the letter C.

Thank you for linking!

I'm always happy after I visit you!