On our way home from France to Belgium, we stopped at a rest area for our picnic and natural emergencies. The place looked quite nice except the restrooms which were in a kind of bunker looking like concrete block, full of ugly graffiti.

We had no choice and went inside. The toilettes were a catastrophe for a new building. I didn't even know that these toilettes still exist, last time I had seen them was in the deep south of a village in Turkey ! 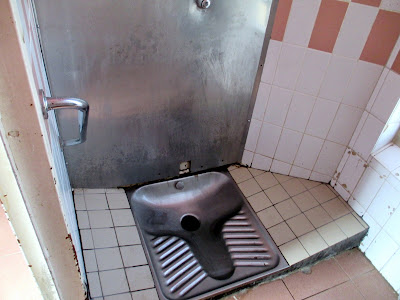 You had to put your foot on each side and target the hole trying not to wet your shoes. I felt like a little girl behind a bush. I wonder how elderly people or a disabled  person can use this kind of toilet ! I thought I was in a civilized country ! Finally I managed and wanted to get out. I pushed the lock to open the door, but it remained closed. I shot in the door as hard as I could,  tried again and again, nothing happened. I shouted "Nicole", but she was already outside and didn't hear me. I kept zen and racked my brain how to get out of here. I tried and tried, but the heavy metal door which looked like a door to safes in a bank remained closed. Nicole arrived, don't panic she said, I will pull from outside and you push from inside. I didn't panic, I was zen and tried again and again. Finally as only solution we thought I had to climb over the door because there was a space. I couldn't even stand on the toilet as it was a hole in the floor. Impossible to lift myself up to the door space. I had no support for my feet. I tried to tear out the metal trash bin, turn it over and stand on it,  but it was fixed forever into the wall.

Poor Nicole wasn't zen at all, she panicked and finally got out to call for help she couldn't drive my car as she had never driven an automatic one. I thought I could phone the emergency with my mobile phone, but I didn't know where we were. Somewhere on a road to Calais. If force doesn't help I thought, maybe patience would help. I moved the lock a little, threw myself against the door with all my forces, then again and again, suddenly the door opened wide and I flew out and hit against the tiled wall. I gathered my spirits, slammed the door shut and went out. Nicole meanwhile had asked a sleeping truck driver for help and while he emerged from his sleep I was standing there. He certainly thought that we were two crazy old women.

I was happy to be free and laughed and laughed. Nicole was still in shock. We had our picnic in the car as it was too cold outside and when I looked at my GPS I thought I could have called the emergency, it would have told me where we were.

We continued our way and arrived home safe and sound. From now on I will check the locks of all restrooms in the world if they work properly !

Much easier to go behind a bush. That type of toilet looks much more difficult to use than a bush and no chance of being trapped inside.

I would not be able to remain zen in such a situation. Locked in a toilet in the middle of nowhere!

Glad you are safely home :)

So silly, I might need more than zen too! hehehe. What a story, it just goes to show, life is one fun and interesting, and sometimes unexpected joy to behold!

So silly, I might need more than zen too! hehehe. What a story, it just goes to show, life is one fun and interesting, and sometimes unexpected joy to behold!

A bush would certainly be easier than that! I never encountered that "squatting" type of toilet, but my sister-in-law told me about public toilets on the streets in France where you stood up... yikes!

Oh my what a disaster. I can't think of anywhere worse to be trapped than inside a toilet! Well done you for remaining so calm.

Yikes! Glad you got out!

Oh my gosh. I try to keep Zen -- I practice -- but don't think I could have been as calm as you in this situation. Worst nightmare for me!
Eeeek. Laughing about the truck driver -- he's probably still thinking about this!

oh dear! I'm glad you were able to keep your cool. I don't know what I would have done in that situation! Glad you got home safe and sound. Hope you didn't hurt yourself too bad when you came barreling out of the door {:-D

Oh man that did not sound so pleasing.

That would be a nightmare for me. Well done for keeping calm.

What a nightmare experience for you - never to be repeated hopefully!

What a story! Glad you figured it out without having to call for additional help. http://lauriekazmierczak.com/zip-a-dee-doo-dah/

Well, that was an adventure!!!!

We are used to these kind of bathrooms lol
What is funny is that some of them have a cement canal outside and everything you do inside the stall comes outside in the back and then gets slowly drained down this cement
canal to where its supposed to go. Every one sees it as it stays for a while till other people use the facilities and keep flushing till its gone.
lol

Ha Ha that was a funny post - well maybe not for you or poor Nicole... Now I'm glad you kept your Zen. So no more squatty loos for you in future, it's safer just to cross your legs!!
Wren x

Yipes! I would have chosen to use the nearest tree. That's zen!

An adventure! Luckily the door was opened at the end!

What a scary adventure! Glad everything worked out and you made it home safely.