1. On Monday I had more or less recuperated from our stressful weekend, and started my day with switching on my now French speaking computer, which took a long time to load. Meanwhile I had coffee, called the gardener to cut the bushes, 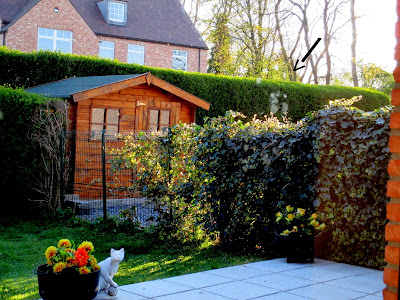 cleaned the hand prints which little hands had left on our French window and only then it finally was ready ! Loading pages for comments took hours and the whole thing was slower then a snail participating in a marathon. In short, my computer had decided to give up it's soul and was on his terminal breath.

2. I told Mr. G. that probably I would need a new computer. He immediately got out of his usual lethargy and started looking for a new one on Internet, a thing he never does when it comes to look up for anything else. That's my job. And he found one ! In our Carrefour supermarket on promotion. He showed me what he had selected and convinced me that Window 8.1 wouldn't bite me. I had heard around me that Window 8 was very difficult to use and 8.1 is the newest improved version. Now he pushed me to eat my lunch quickly so that we could go to the shop (as if it would run away). That's what we did and as he didn't know Window 8.1, I had to drop him off at the Computer center of Waterloo, where he works twice a week as a volonteer to help people learning how to work with a computer. There his collegue installed what I needed, my bookmarks and other stuff, when it was finished he called me to pick him up and half an hour later I had my new computer ! 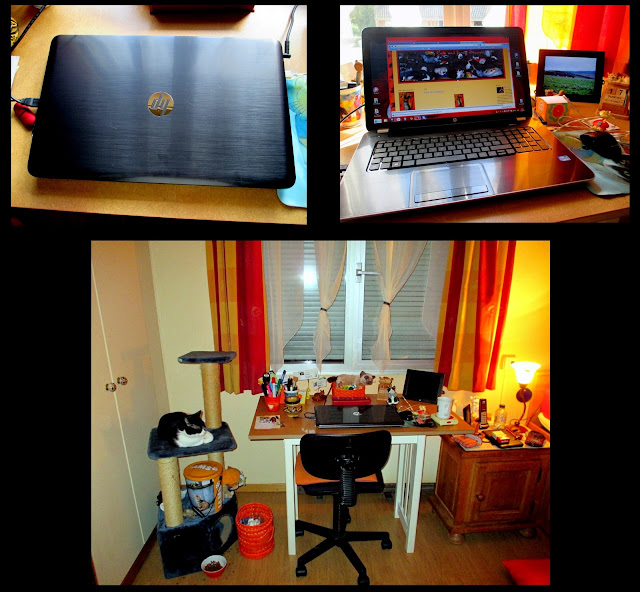 It is a HP, 17 inches screen. I took off my old snail, and Mr. G. connected the new computer. It worked perfectly ! It is so quick that I first had to get used to it, it was as switching from an oldtimer to a Ferrari ! Of course I still have to learn some things, but at least I can blog as usual and read my emails. I think we should buy a computer every day to make Mr. G. move ! Unfortunately I am not Mrs. Bill Gates.

3. I just took the time to go shopping for food, my fridge was as empty as our bank account, and then spend the rest of the day with my new toy, discovering more and more functions.

4. Nicole celebrated her 75th birthday and Ilona had invited us for this event. It was sunny and warm on her terrace and we had coffee and a birthday cake.

Nicole complained about back ache as she had moved arround her furniture and done far too much. 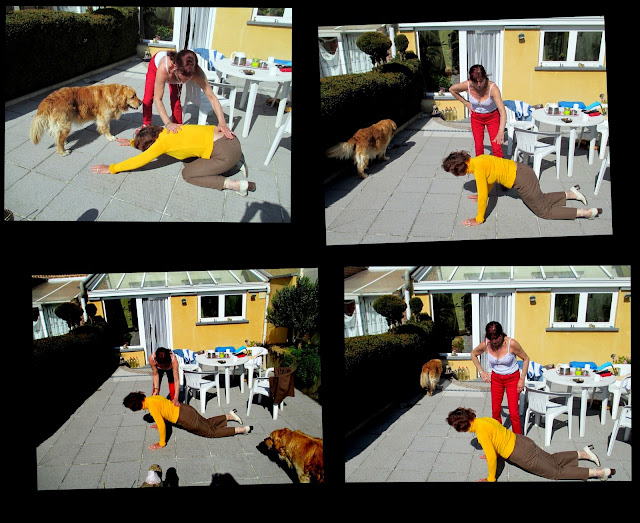 Ilona showed her some Yoga exercises which should help to get rid of the backache while dog Charlie wondered what his servant did on the floor. Of course we were laughing like 3 Kookaburras, I wonder what the neighbors thought, probably that we were a group of hysterical schoolgirls.

5. I had the good intention to work a little bit in the garden, but after having pulled out a few weeds, I thought I could do it tomorrow. My green thumb hurt. Therefore I spent the afternoon with my new toy work tool, discovering new things. I found a camera with all kind of possibilities,  and while Mr. G. watched what I was doing, 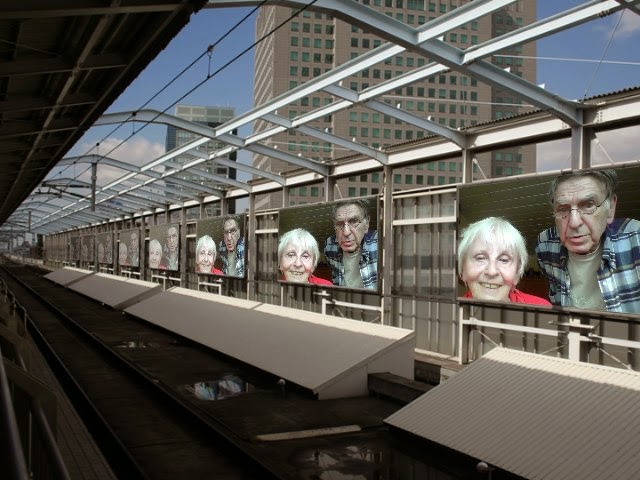 my computer took this picture, I swear we were not in this train !

You've certainly been busy! I am amazed that you always find time to blog. When I am tired I just read! we're invited to a bbq today... which is fine with me but I come from a Catholic country, where only fish is allowed today.

Fortunately the new computer has not changed your posts. Amusing as ever.

I live and learn!!! Your computer takes photos? Amazing.

That new computer has you doing all sorts of new things. don't you just love learning new things? I do.

Yay for new computers!!! I love doing yoga exercises for my back...always feels so good!! Enjoy the weekend and happy Easter!

From an old-timer to a Ferrari -- I love that! Congrats on the new computer. Have a happy Easter!

Enjoy your new computer. Yoga exercises for the back are good. You are busy! Happy Easter weekend.

Gattina! What fun to learn all the new tricks of your new computer..... it is like learning a new language every time isn't it!!! You pick on your sweet old hubby too much. Mr G is not nearly as lethargic as you make him out to be ... if he can get up, shop for the best computer and go buy it. And he volunteers a couple days a week to help others? I think you've got a keeper there really! (My husband is a good computer tech too. He fixes all the minor problems. All I know how to do is use it -- I can't do anything when there's a problem.

Looks like you are having lots of fun with your new computer. And look at all that sunshine you are getting!

I have an HP laptop too. I bought mine just over a year ago and I was like you, it was so fast I'd get left behind!

It is always good to read your Fave Five, they are good for a laugh. I agree with Sally, Mr G is not all that bad if he can do all those things. Lucky girl to have a new computer. Mine is still running in the snail marathon. I have to wait until I have paid for the house to be painted and have new blinds installed then I can save for a new computer.

I don't always like the learning curve when I get a new piece of technology, but it doesn't usually take long to get used to it. Sounds like you're having fun with the new computer!

The dog is funny watching the yoga poses. :-)

I like that photo at the end, the one of you and your husband in the train station. Very nice.

I like that photo at the end, the one of you and your husband in the train station. Very nice.

Yay for Mr. G and a new computer! LOL at your green thumb hurting. I'll have to remember that next time the weeds beckon.

You will be a super author and reporter now with your new computer!
The pics with you and Mr Gattino is fantastic!!!