MY WEEKEND OF FEBRUARY 1

Our Aqua Gym group had decided to celebrate the New Year by having lunch together. 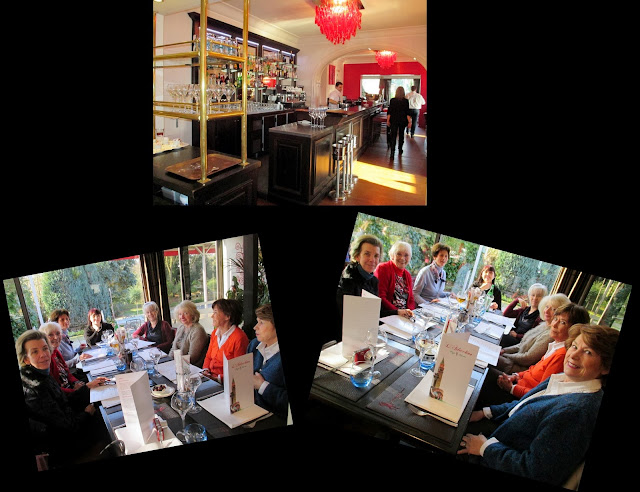 When we had all arrived in an Italian Restaurant, we had to laugh, because we didn't recognize our teacher, sitting at the end of the table, with long hairs and dressed ! We were used to see her in her bathing suit and hairs up ! It was nice to meet out of the water and all dry for once. The food which should be Italian wasn't very good, and therefore also very expensive and I was really disappointed. 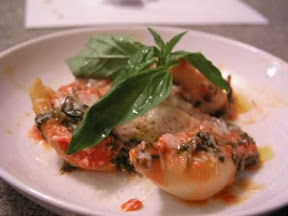 I should have been served a plate like this, called conchilgioni (shells) but they were so dry, hard and a bit burnt, that I suspect them to have an agreement with a dentist and get commission on each broken tooth ! 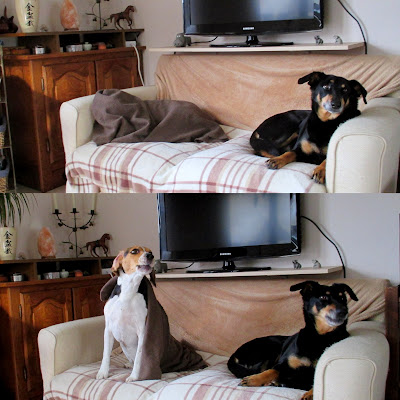 After lunch I went to my friend Chantal, and we chatted the whole afternoon, she had got a tablet for Christmas and was just learning how to use it. One of her dogs always wants to sleep "under cover", it really looked very funny ! 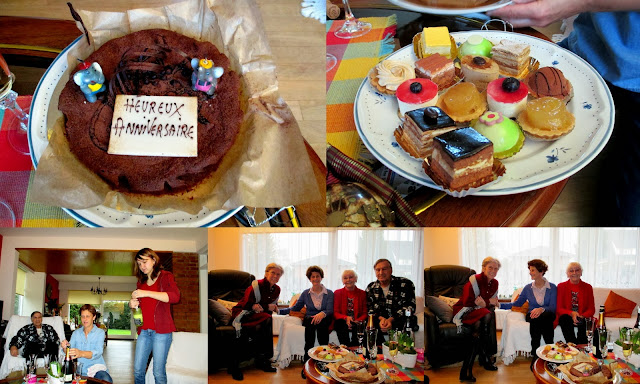 We were invited to the 75th birthday of my neighbor (on the left), whom we know since we moved in our house in 1975. Her daughters used to play with our son, and now she has a granddaughter of 18 ! Time flies by ! We enjoyed the Champagne and the delicious cakes very much and dug out old childhood memories when our kids were little and did a lot of naughty things which made us laugh today. 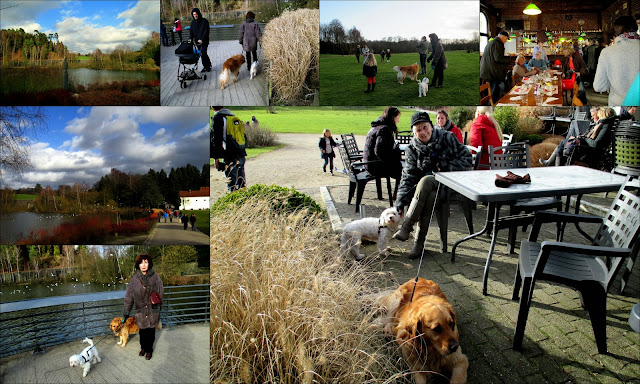 On Sunday the sun was shining and we had a beautiful but cold weather. It itched in my feet to go for a walk, but Mr. G. had never liked to walk so I thought a dog is a better company. Nicole just had her daughter's dog at home, so we decided to go to a park nearby with the two dogs. It was a lot of fun and we were not the only once with the same idea, there were lots of families and people with dogs and kids playing around. We had a drink on the terrace of the restaurant which is there it was so packed that we could hardly find a place. We waited for a waiter who didn't show up, until I suddenly thought maybe they do it now the English way and went inside where a long queue of people were standing, who ordered their drinks and took them outside. That is very unusual for Belgium and lots of other people were sitting outside  waiting, until I told them that it had become a self service now. 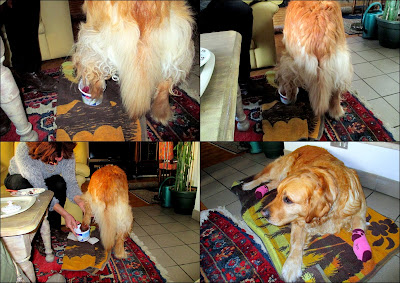 When we were home again, Nicole had to take care of Charlie's paw, he had a surgery, a claw had grown inside his paw and she had to disinfect the wound. He was so brave and left his paw in the pot with the disinfection product and said nothing when she put a sock on his paw. The front paw needed one too, there he had a little infection. I thought he looked very posh now !
Posted by Gattina at 06:30

I love Charlie, he is such a good dog, I feel I want to knit him some socks...but I won't. I know cats love sleeping under covers, I didn't know dogs like it too.

It is nice that your aqua class teacher came for lunch. I am sure it is not part of her job. Yes, high priced food can often be not very good.

Great for your aqua group to celebrate by eating out; just sorry the food wasn't up to scratch. I love Charlie - such a handsome fellow and brave too. Great new header you have, too. I hope to be back on Blogger now again after quite a long break.

Everything looks so yummy. Love the cakes!

Bummer about the bad meal, but fun to celebrate anyway.

Once I met a lady from my swimming class somewhere else and she said 'I didn't recognize you at first with your clothes on!' ;>)

Poor Charlie -- he looks like a good patient and should recover quickly therefore!

You're right, Charlie is a very brave boy, keeping his paw in the disinfectant.
It looks like you had a good time with your swimming/exercise friends, although burnt lunch doesn't sound very exciting. The birthday party looks like fun, boo, all those yummy things to eat. And the self-service restaurant made me laugh. Walking with the dogs would be fun, too. Your weather looks lovely. Here it is very sunny, but very, very cold.
Luv, K