1. This week was very exciting ! It made me think of the French song Comme d'Habitude which means "As usual". The lyric is quite simple  it starts with "I get up and not to upset you by waking you up, Which isn't quite true as I start my Yoga exercise before I get up. As usual my hands caress your hair. In my case its the fur of my two sleeping cats. As usual  you turn your back on me. That's not true either as they don't move, not even opening an eye. 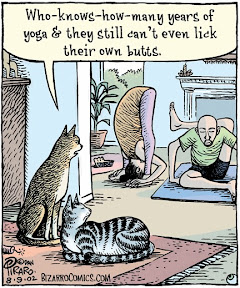 this is not my ambition !
and it's true that my two other cats are watching me, but only because they want breakfast.

As usual, all day I'll pretend a  play . As usual, I 'll smile, I'll even laugh as usual, I'll finally live as usual. and so on. The truth is that I do my aqua gym each Monday as usual, and then  I went shopping as usual, to fill in the fridge, for Mr. G's roaring stomach. Vintage men are always afraid not to be fed enough.

2. I helped my friend Ilona to change the look of her TV corner and after having moved around tables, TV shelf and flower pots, without any satisfying result, I finally found the solution, it had been too simple ! By pushing the shelf a little more in the corner and turning the TV a little around, the change was done and what a nice change ! We just had to add a flower pot and some Buddha figurines and it was done. Very satisfied we drank our tea, complained about family and the world in general .... as usual.

3. As usual I had forgotten something on my shopping list and had to go out again to buy bread, and as usual I added something which hadn't been on my list, my night creme. I met with a friend for lunch, it was a long time that I hadn't seen her, I have to say that her main conversation theme are her bowels, which is not so ideal for a conversation in a restaurant. But from time to time I show some interest, it's always useful to learn new things. Even about the bowel function.

5. When I arrived at my painting class which takes place in the festivity hall of Waterloo's retirement home, there were wreaths and flowers laying at the door to the morgue and a guy sawing a wooden panel, I only hoped that it wasn't destined for the coffin, because for that it was a little late. All funeral attendants were already waiting in the entrance hall, all dressed up in their best outfits. My friend Nicole wasn't there, so I called her to check if she was ill, but not at all she was just standing in front of her aunt's (98) open grave, on her funerals. I don't know if this inspired me to start a new painting showing a dark sky and a sun disappearing in the dark sea.

I am glad that your "as usual" week was a pleasant one. . . . You are so funny, Gattina. I had to smile about your bowel story and your concluding remark. . . . Have a great weekend.

Improving my health, as usual. You should meet my mother and really hear about bowel problems.

Why is it that I rarely go shopping without forgetting something? :))

Your posts always make me laugh!!! And yup...I almost always forget something when I shop!! Enjoy your weekend!!

Google's intrusions on my privacy are more than a little annoying.

Thanks for joining in R5F this week.

Nothing like a conversation about bowels in a restaurant to losen things up:) B

i saw that cartoon this week too - & i had a great laugh. it was too great. wonder how the cartoon person thought of it? i love a funny brain. ( :

I hate it when Forget something on my grocery list even though it was plainly written there, so when I think of something I need as soon as I get home from the grocery store.

I always forget something when I go shopping and I always add something too! You are busy! Happy Friday!

Love the cartoon :)
It's my first Random 5, so lovely to 'meet' you and learn a wee bit about your life :)

I love Arthur following you and singing! He's a very dedicated guard-cat.
I hope you and Dominique have Google Chrome all straightened out. I use Chrome as my browser but I didn't know it had a tendency to wander.
Thank goodness for Arthur!
Luv, K

I do that at the store all the time - I no sooner get home before I remember something I forgot, and almost every time I go to the store I come out with more than was on my list.

It's nice when there is a simple solution to moving furniture.

That's odd about your Google Chrome showing up on someone else's computer. Glad you got it all worked out.

Such a funny comment about Mr. G's roaring stomach...seems like that is how my hubby is part of the time. Always fun to read your random five.

As usual your usual turns into something a bit unusual with some very unusual adventures tossed in as usual.

Those were great as usuals...although No 5 was a bit unusual!

we just came from the market and I truly hope we have not forgotten anything important....because I am not going back for a good long time!

You make me laugh-- "as usual"! And I will try to keep your wise words in mind the next time someone's conversation centers on their health problems (as wayyy too many conversations these days seem to, dang it.)

What a sweet cat to walk you home! Strange about the google chrome. Quite a mystery. I'd never figure it out. You sound like me with the groceries. Always forget something and then go back and end up getting even more. Story of my life.

As usual you made me giggle with your stories.

I do love reading your stories. You make them so much fun! I agree, it's impossible to shop without forgetting something.