After the heat yesterday, this morning it had cooled down and the sky was cloudy. I was a little disappointed but nevertheless decided to go to the seafront alone, as my friend was feeling very tired. Fortunately the sun came out a little later. 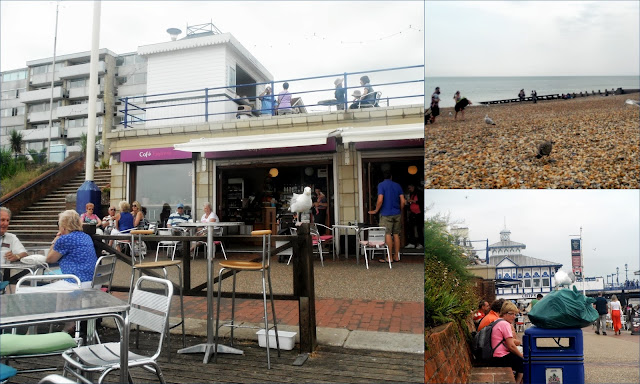 I had a sandwich and tea at my favorite place just beneath the Kiosk where I lost my wallet. Behind me a couple was sitting and the woman's phone rang; I heard her saying "I'll call you later I am in a business meeting " ! I had to laugh because sitting at the seafront in a café with a boyfriend is not really a business meeting unless the lady has a special job !

The seagulls were diving on the sandwiches and managed to take a whole sandwich from one of the  two ladies sitting in front of me ! They were so surprised and so was I. Then I met two ladies from London who complained about the children throwing stones at the seagulls. I told her to give them bread  instead a stone and watch what the seagulls would do, and then of course we laughed, because she had done so  and was bitten in one finger quiet badly. We talked about Europe and the new immigrants from the Eastern countries and finally discovered that all European countries have the same worries about jobs and money.

After nearly 2 h I left them and decided to take the Eastbourne sightseeing bus, which I had never done. 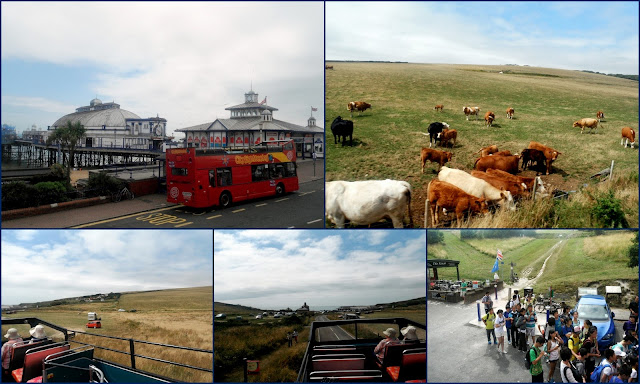 It was a beautiful tour up to Beachy head and the beginning of the South Downs National Park. At one moment there was a whole class of Japanese teenagers stepping into the bus and they all had an Ipad to take pictures, which looked rather funny. Unfortunately as all teenagers of the world they chatted like a bunch of geese and I could hardly hear the explanation of the tour. But I did the tour twice as it was so nice to sit on the upper deck, enjoying the sunshine and the beautiful landscape, it was the same price I could have started in the morning and sit on the same bus the whole day !

This evening my face looks like a ripe tomato !
Posted by Gattina at 06:00

I just love journeying with you on your travels. You do so much and your way with words is brilliant! Enjoy the rest of your stay. (((Hugs))) Jo

That reminds me of taking the Oxford tour bus by myself. I enjoyed it so much, I went twice. Meanwhile, my family had rushed off on a train to do London in one day. They came back exhausted, especially my poor mother. I'm glad I didn't go. I'll see London some day, and use more than one day.
K

Hi Gattina ... what a good thing to do - and the views up on the Downs are wonderful ..

Cheers - see you later on! Hilary

It must be nice to sit by the sea and have lunch with the seagulls. A great way to see any place is on the hop on hop off tour buses.

Oh those sea gulls can be dangerous!!
Yesterday I heard that the Jews are now accepting Jesus as the messiah.
What a change.

It is nice to have a change of scenery. I guess you tired out your friend finally lol

What a fun post Gattina! You are such an inspiration...going off by yourself and making friends everywhere you go. It was such a beautiful day and I love those top deck street cars.

Oh yes, and if I'd had a job like that lady who was "at a business meeting" I'd still be working !!!

Mad dogs and Englishmen go out in the midday sun, as the song goes, and so do women from Belgium.