Helps you to remember what you have done on the weekend of September 8. If you participate please put the little logo on the top of your post and leave your link.

This weekend was the yearly "Farmer's feast" in Waterloo. The last two years I hadn't been there because the weather was so bad. This weekend we are very lucky we have summer ! 25°C and sunshine ! 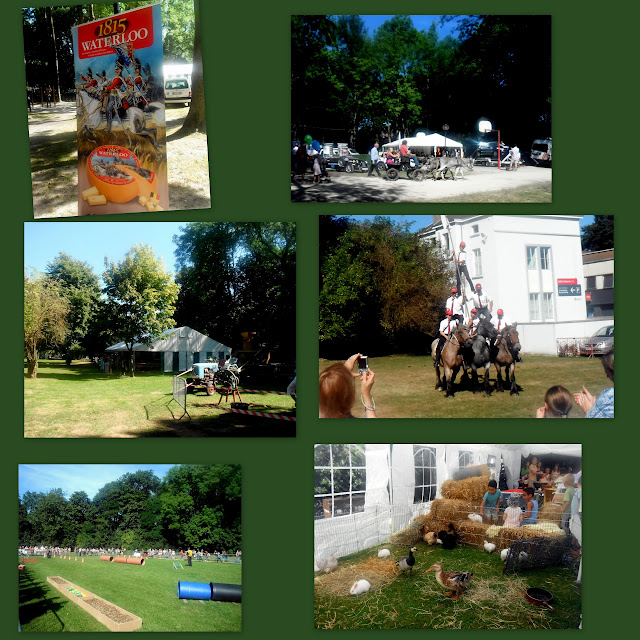 I met my friend Nicole and we walked through the stalls and watched the shows. I discovered that now, besides a beer called "Waterloo" we also have our own cheese "Waterloo" ! 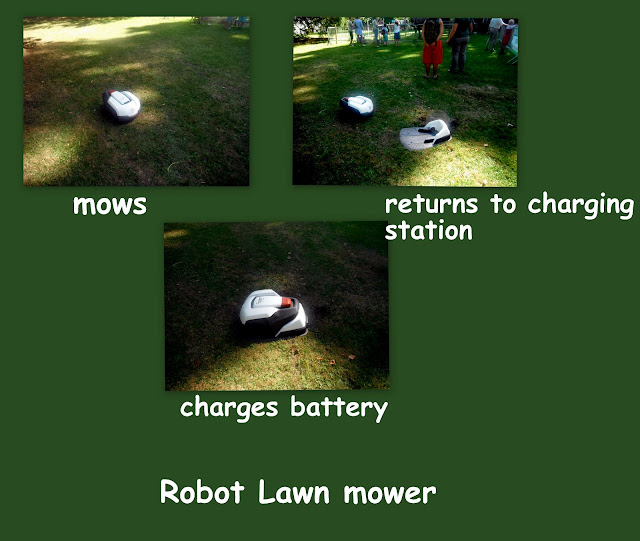 Suddenly I felt that somebody was following me, and it was this robot lawn mower, which is my dream ! As it becomes harder and harder for me to mow the lawn and Mr. G. can't do it anymore neither, this would be the ideal solution. It mows and gets back to its station to recharge ! You can go shopping during this time or read a book on your patio. 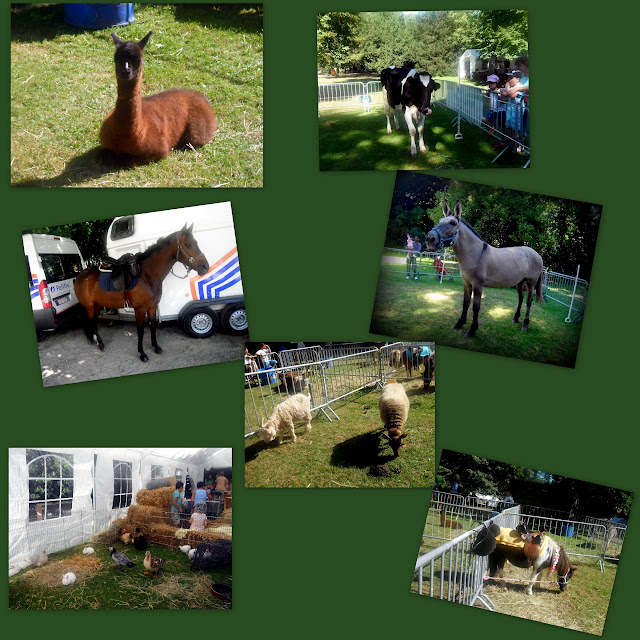 We said hello to different animals 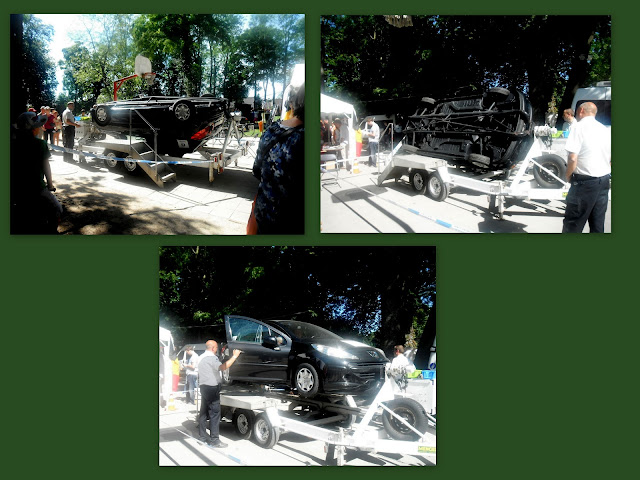 The police showed how you would feel if your car turns around during an accident. Mostly fathers and sons sat in the car and were whirled around. When they came out they looked a little green. 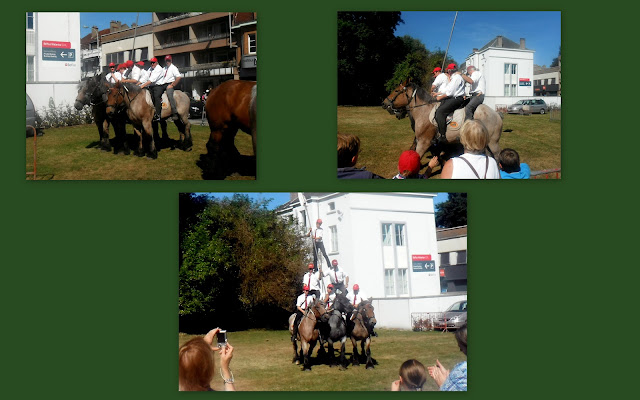 There was also a horse show 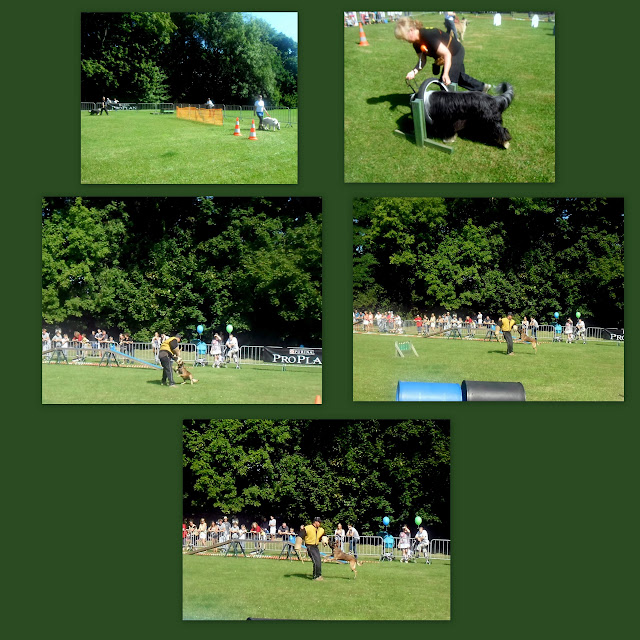 and of course proud dog owners presented their dogs and showed us what they were able to do and the police dog attacked a man until his owner told him to stop. I thought of my cats they would never do what they are told ! No way.

We didn't stay very long because each year it's the same and on Saturday's there are less people then on Sunday where are even more shows are going on. We went to Nicole's sat on her deck in the sunshine and had a cup of coffee and an icecream.

On Sunday was the Buddhist Feast in Huy, a charming old little town not far from the Ardennes. 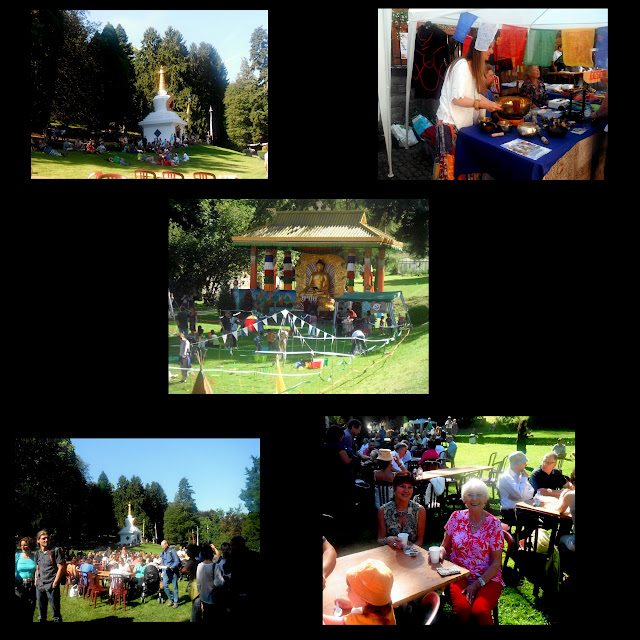 My good Mrs GPS took us there without any problem, avoiding an enormous traffic jam on the highway ! We were really lucky. I had been at this feast in 2009 where I enjoyed it very much. The following years the weather was too bad, so we didn't go. Meanwhile it had changed a lot. It seemed to me that the philosophical spirit was gone, there were less people, I didn't see a single monk and we found that whole thing had become quiet commercial. Little hand made things you could buy for a good price, had tripled in prices and there also was less choice.  Only the food was still very good. So we had our lunch sitting in the sunshine, but then we left rather disappointed and preferred to spend the rest of the afternoon in the old city center of Huy. 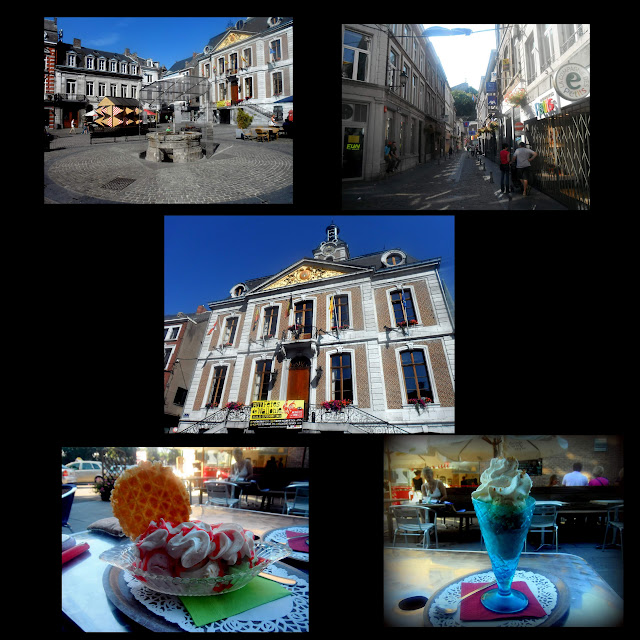 We sat on the place just in front of the city hall and had a cool beer. There were a lots of people who had the same idea. The way back went smooth too, so before returning home we had a delicious ice cream in Waterloo's Tea Room, specialized in ice creams, wafels, crêpes etc.

It had been a quiet busy weekend !
Posted by Gattina at 06:00

Labels: Buddhist Feast Huy, Farmer's feast, Waterloo, What did you do this Weekend

Mine is up.
Oh I just love little donkeys. They have wild ones on the island of Bonaire! How I wanted to put one in my suitcase and bring it home! lol!

Love those adorable animals! How I wish we could have animals at our fairs. I would love to have a robot vacuum cleaner for my house.

I enjoyed the Farmers Feast, so pleased you had decent weather.

You always have busy weekends :) You're right, these festivals start out small and authentic and then they become really commercialised. I hate it when that happens.

What a pity you had a bit of a disappointment. But mostly the weekend was good, wasn't it?

I'd be interested in that robot lawn mower. How do you stop it from mowing the flowers?

You had a lot of fun this week end. I wouldnt mind a goat to cut my grass here lol
Should ask a farmer. lol
I have to fix the car door and went to three places and they don't know how to do it It's locked and won;t open even with a key To take it apart to see inside you need to open it lol
So now I have a huge problem.
Never a dull moment.