I suppose that often in your life you have a big  "question mark" in your head, instead of a creative brain.

That happened to me when I thought about a theme for the letter "Q" ! and suddenly I had the idea ! Do you know where this sign is coming from ?? What would we do without it ? That is a question !

As always when I have questions I google ! That's what I did and now I am proud ! I know why and how the question mark entered in our our texts !

In the early 13th century, when the growth of communities of schools and universities in  major cities led to an expansion of the book-production trade, punctuation was rationalise.

The symbol is thought to originate from the Latin quaestiō, meaning "question", which was abbreviated during the Middle Ages to qo.

Isn't that interesting "qo" What a great invention ! It's much shorter to type the sign ? then typing qo ! You even find it on your keyboard.

Feeling much better now that I know what ? means, I had the idea of creating a question mark armchair (without arms) ! Like this 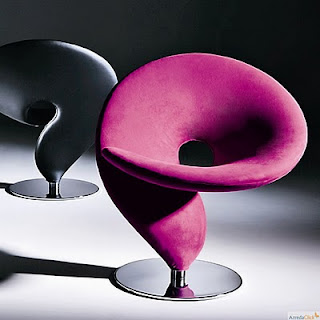 But .... somebody had this idea before me and I don't steal if it is not necessary !
Posted by Gattina at 06:00

Thanks for that you taught me something I didn't know.

??? guess I never thought much about it! Thanks for the insight and the chairs are cool!

I like the chair and yes I have lots of question marks in my life.

I think life is a question mark.lol

I never realized the etymology of this symbol. Thanks for enlightening me!

Fascinating information. Who would have thought that qo=?

Gattina, you answered the ? that I have wondered about for quite a while--and now I know how the ? came into being! Great"Q" post!!

LOVE the ook of the Q chairs!

very neat evolution from quaestio to ? Thanks for the info {:-D

You make me laugh while you're teaching me something new!

Cool stuff, Gattina! I had no idea where the symbol came from and now I do!! Thanks!!

Thanks for sharing your great curiosity and what you discovered with it!

I didn't know this at all!

I found this quite fascinating...you have such wonderful curiousity!

Thanks for sharing what you found with us.