If you want to know what "creativity" means, the dictionary tells you "the state or quality of being creative". which is very instructive. Now at least you know. Another one explained a little better :

"the ability to transcend traditional ideas, rules, patterns, relationships, or the like, and to create meaningful new ideas, forms, methods, interpretations, etc.; originality, progressiveness, or imagination"

and real good is this quote from Edward de Bono, even though I don't know who he is

“There is no doubt that creativity is the most important human resource of all. Without creativity, there would be no progress, and we would be forever repeating the same patterns.

Being creative concerns a vast domain, it can be your home, your artwork, your garden etc.

In my painting group, there is one guy who is exceptionally creative ! Some take him for crazy others think he is a genius.

To make his painting he constructed this vehicle : 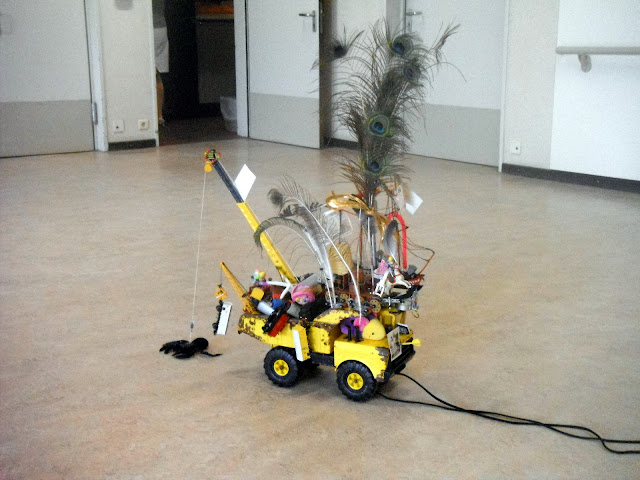 A toy truck on which he fixed peacock feathers 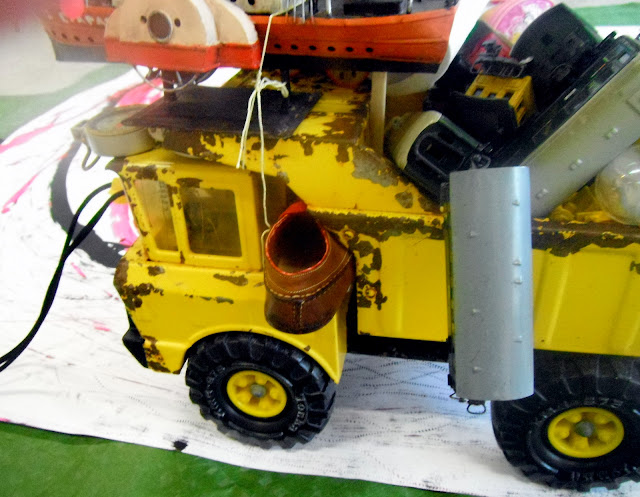 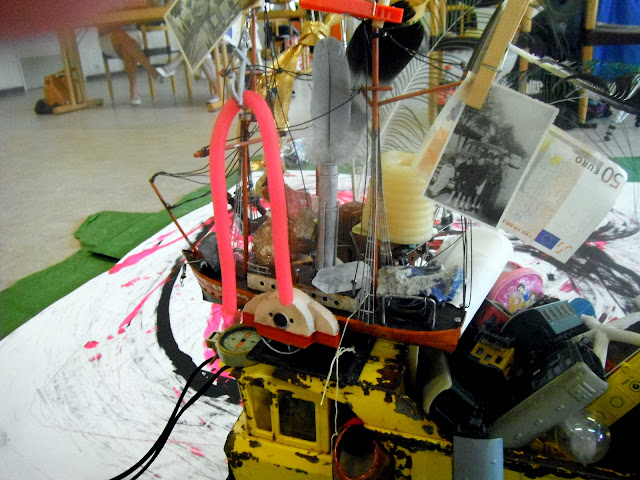 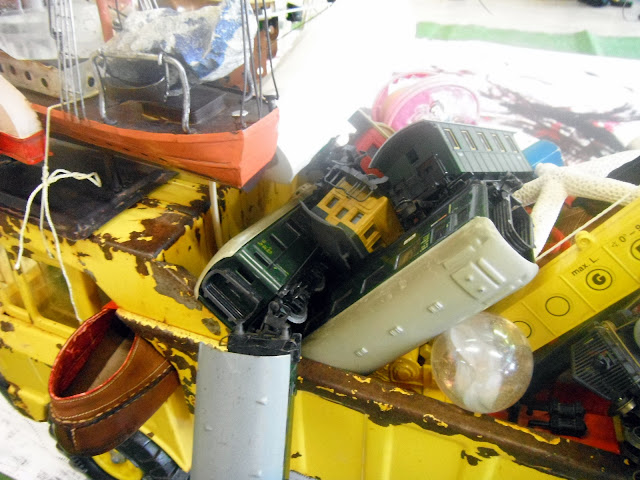 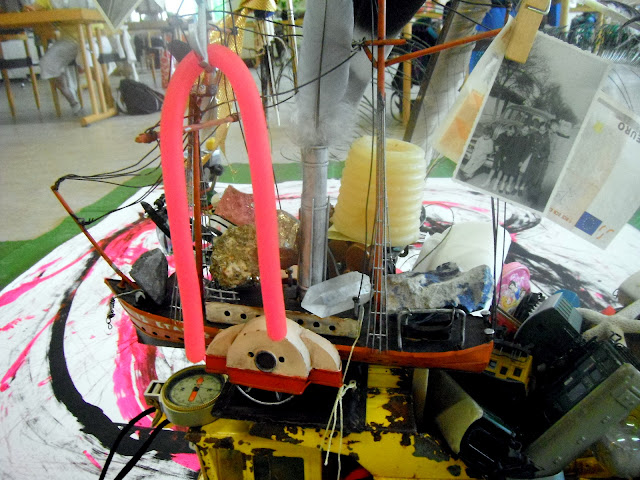 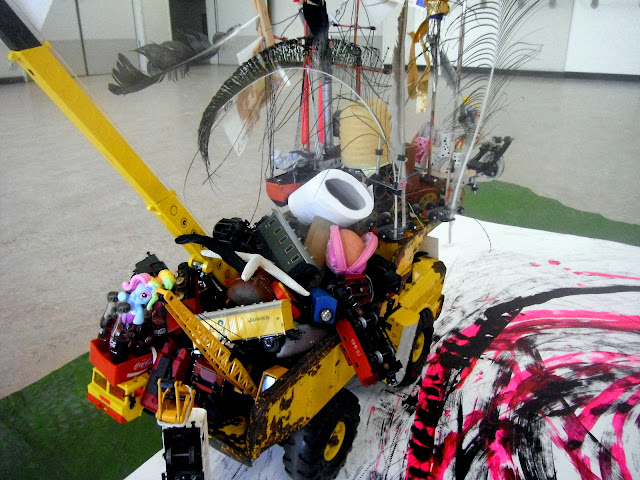 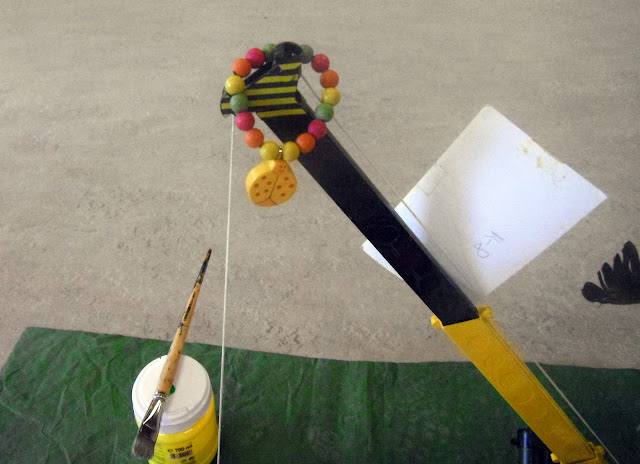 maybe you discover more on these pictures, the truck's end was this little ladybug wristband 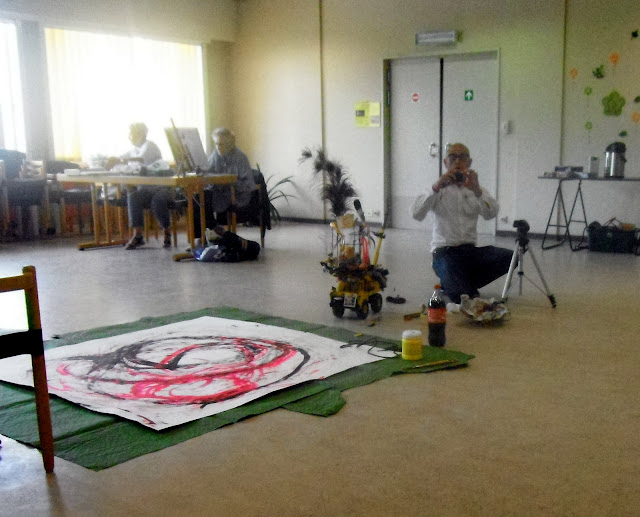 He had attached two brushes with red and black color and then he pulled the truck in circles and finished his painting. of which he then took a picture.

Now if this is not creative I really don't know what creativity means !

Maybe the painting which hangs in a famous Brussels Museum, showing a blank canvas titled "Landscape in snow" !
Posted by Gattina at 06:00

Hi Gattina ~~g Excellent! Your painter friend's model is similar to a shopping cart belonging to a run-away kid. He had it parked outside our local super market.

The basket was filled, most impressive was his dog and its dog house. He had a bicycle and his suitcase. I can't remember the rest, but it is here:
http://1.bp.blogspot.com/_aOZEGRAw2Q8/S43a1YWAqmI/AAAAAAAAG-E/MsDRI5hQzgQ/s800-h/DSC00417.JPG to paste.
..
BTW, when I see your name in Mr. Linky, comments, etc, I am reminded of Dr. John, the retired preacher who died a couple of years ago. You were always winning his give-aways.
..

Definitely down to the 'beholder' I think. One man's creation can be a puzzle to another. Thanks for sharing!

What a creation! I love the peacock feather.

Well, he's definitely creative! But, Gattina, so are you!!!!!

And maybe a little bit of a character, too?

Sure glad we all came out of the cave and started to be more creative...coffee is on and I'll be around for the hunt on Saturday.

That is definitely creative!

Love it. Reminds me of something my hubby would do! :)

Golly. And I thought painting with a brush on boards was creative.

Wow. What an interesting post. I really liked reading about this type of painting!

Thanks for sharing it.

I love the little truck. It's extremely creative and lots of fun to examine. The painting he did with it, less so.