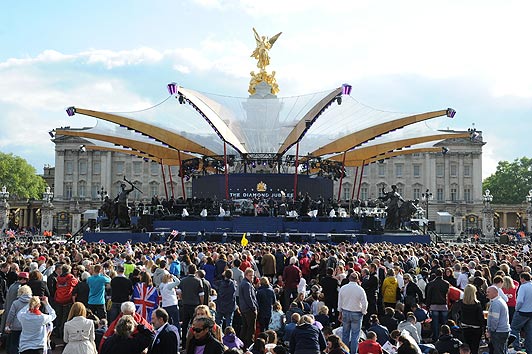 I had recorded the Queen's jubilee concert and finally while I was eating my lunch and Mr. G. had joined his bed for an afternoon nap, I finally watched the concert. I found the stage great and everything very well organized. Once I had listened to half of Robbie William's songs I kept my finger on the FF button. I ffed through the songs, sometimes listened what the different presenters had to say, some quiet funny some with "below the belt" jokes which I don't like. Then showed up a chinese version of Tom Jones. Probably a not so good facelifting had given him this look. Although 72, he had still had his powerful voice and it was a pleasure to listen to the old song "Delilah". 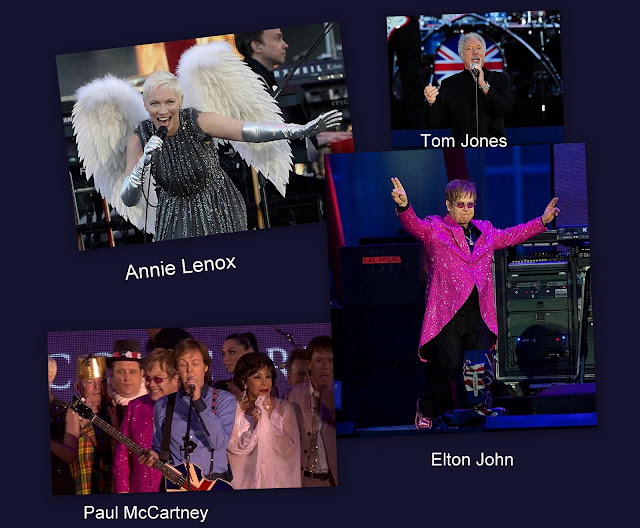 Biting in my sandwich, I suddenly saw a pink Lady Bug on the screen and stated with horror that it was Elton John in a glittering pink jacket. I had seen him twice life in Brussels, when he was in his 30th just like I was and was dressed in his fancy costumes, jumped on the piano and played laying on it ! The second time he was 64 and it was last year, but then he was dressed in a dark suit and only sat at his piano, without playing "young". Now in the Jubilee concert he choose to look ridiculous and also his voice wasn't as strong as usual. I ffed again and saw an angel on the screen which made me laugh, it was Annie Lenox, outfitted for Carnival.

Behind my sofa which separates the sitting from the dining area, I heard "crack", "crack" "crack". As I didn't see anything special I continued watching the concert. I feared for 70 year old Paul McCartney's tiny voice I thought it would break in a minute. Being besides the Queen in fancy braces holding his trousers on the rather skinny body, wasn't of the best choice neither. 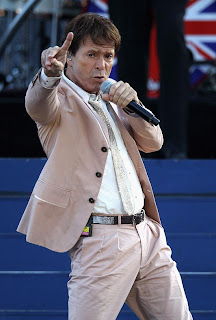 The only one who looked really unchanged or nearly was 72 year old Cliff Richard who also was well dressed and performed as I had seen him when he was 30.

And while I thought why these artists who all have the same age range like me, don't accept that they are old now and behave accordingly ! Being ridiculous while wanting to look young makes them even look older !

Meanwhile Mr. G. had shown up again and said without looking at the screen "You know there is a big fat mouse behind you !" "Ah, I answered "I didn't know". Yes, he said and it looks like if she had played the corpse in a CSI series, she or he (he couldn't tell me the sex) was cut into several pieces, fortunately he didn't tell me the stomac content. He collected the different mouse pieces and throw them in the bin. 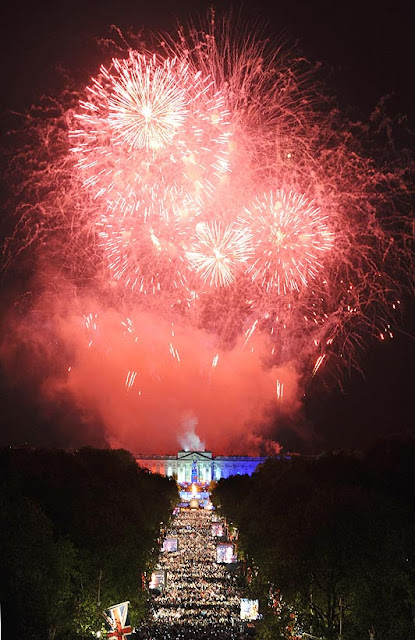 My concert was finished too with a beautiful firework and I saw my cat Arthur with a satisfied look on his face jumping on the radiator and rest after his mouse hunting. 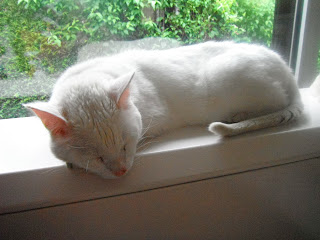 Oh I would love to watch this concert. It hasn't seen or might not be shown in Singapore. I do want to watch Cliff Richard and listen to Tom Jone's Delilah.

Great post. I didn't watch the concert but have read about it on some blogs and I don't think I missed much.
I don't agree that people should act old. If they want to be silly and enjoy themselves good luck to them. I act silly sometimes.

Gattina, be careful on British soil, you might end up in the Tower for saying that about Tom Jones (you were right though)!