1. It still rained and I couldn't mow the lawn or take off the ivy who is invading our garden. I was so fed up with flower planting and also to put more bark in the front yard, that finally I asked our nice little gardener to do everything for me which he did it took him two hours and I was happy to sit behind my computer and write emails. Garden work is definitively nothing for me. I have no green thumb ! 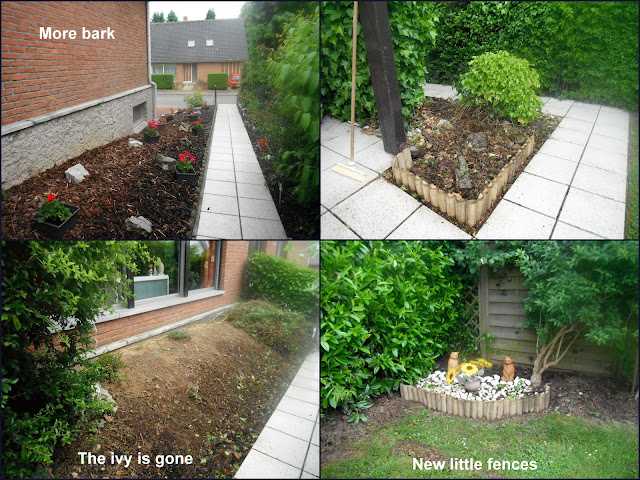 2. I still need some more flower plants since the ivy is gone and went to buy some, but they all looked so measly and also were far too expensive that I drove home in this weather ! 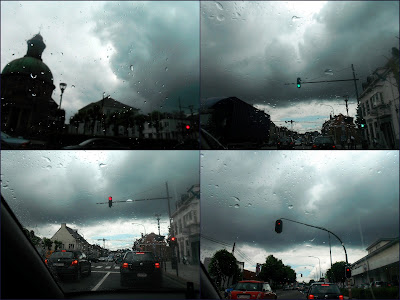 That's how the weather is on a 5th of June !

In the evening Vivi (73), my neighbor called she was in a terrible state, she had gone over to her 93 old boyfriend to have supper with him as they do since 5 years, only this time she found him dead. In the morning he had done the shopping by car, in the evening he wanted to repair a vaccuum cleaner and was looking for tools in the basement, he had opened the door and got an apoplectic stroke and was already dead when he fell down the stairs. That's what the doctor stated later. As he has no relatives anymore besides a daughter who lives in Canada, the police came and poor Vivi wasn't even allowed to take anything private with her, as officially they have no legal relationship. I liked Jack very much he was such a joyful and charming man. In one way I am happy for him that he died this way, without being sick or suffering, but for those he leaves behind it is very sad. (Their love story : Love at 70)

3. We had a machine to vacuum dead leaves, which we had never used. I went to a shop a kind of Ebay only life and not on Internet and sold it. So now with money I will buy a little fence we need to keep the earth from the tiles.

4. I went crossed the street and visited Vivi, who looked like a shadow of herself. She was sitting on the sofa with a picture of John on the table. We talked about old times and what we had done together and I managed to make her laugh. She then pointed on a beautiful huge rose bouquet and told me that he has offered it to her just the day before he died. She wanted to dry a rose and keep it as memory. Suddenly I had an idea, I have some varnish in Spray for Acrylic paintings and thought if it varnishs paintings it also can varnish a rose. I cut off a rose, sprayed the varnish all over and then we let it dry. It seems that it works and on top it looks beautiful and even more red.

5. After the bad news I got some very good news. While I was with my friend Ilona on the phone her daughter called her on her mobile phone to tell her that she had just become great grandma !!! We have the same age and I just became a grandma. Now her mother great great grandma is very happy because there are 4 generations of girls ! That's rather seldom today.
Posted by Gattina at 06:00

Oh my ! What a full week end.
Condolences to your friend. What a way to find her friend.Poor guy.
and his family in Canada too, so far away.

But then new birth :)
Hard to both laugh and cry.
Better to laugh :)

You have had an eventful week. Shame about the weather and your friend's sad loss. I'm glad that you could cheer her a little. Hope the sun shines soon. Our days are cool and short.

Oh I'm so sorry for your friend - how blessed she is to have your comfort and support. And what a good idea for the rose - she'll cherish it always.

We've had the same grey cool weather this last week but today - sunshine! It's so cheery!

Congratulations to your other friend Ilona (her name is similar to my mother's - Leona) - 4 generations of girls! That's awesome!

Happy weekend Gattina! Hope you get some sunshine for your garden!

A death, and a birth - life goes on. We mourn with those who mourn, and rejoice with those who rejoice. Do you have photos of your friend's friend that you could print out for her?
Lea
Lea's Menagerie

I'm so sorry for your friend. I think it might be easiest on the person to die suddenly, but sometimes a longer illness gives everyone time to say good-bye. How sweet to be able to preserve one of his last flowers to her.

How sweet to have four generations of girls!

Your garden areas look very nice! I'm not very good with that kind of thing, either -- how nice to have someone do it for you!

Oh poor Vivi! How sad. You know, I guess this is as good a reason as any to allow marriage of any kind. I mean gay marriage, normal marriage, any. And one is never too young to protect the one they love, with marriage either.

I'm so sorry for Vivi, that she lost a person she cared for so much. It's nice that you can be there for her to keep her company and cheer her up a bit.

Dear me Belgium looks cold and wet... London has been exceptionally windy this morning...

I'm so sorry for Vivi for her loss. It was good that you could be there for her and came up with a great idea for preserving that rose for her.

I am sorry for your friends loss. She is blessed to have you as a friend.

After the worst comes the best. I red on your blog about this big love during long years! It's very sad for your friend. And congratulation to Ilona! It must be a such joy to become grandma!

Your garden is beautiful. Looks so peaceful. And your weather looks like ours has been all week. So sorry about your friend's boyfriend, but what a lovely thing for you to do with that rose. How special.

your yard looks great!
and congrats to your friend and her new great grandchild