RIGHT OR LEFT SIDE DRIVING ?

We have been many times with the car to the UK but it was always Mr. G. who drove. When you are married you become stupid because it's always mostly the man driving, pretending that he drives better or that he gets sick when the woman sits behind the steering wheel.

But it intrigued me why in all other Eurpean countries (or nearly) we are driving on the right side. I googled around to find an explanation.

Apparently, in older days when people passed each other on the road they should be in the best possible position to use their sword to protect themselves as most people are right handed and they therefore keep to their left. So is that the reason why in the UK you drive on the left to be able to carry a weapon in your right hand and instead of insulting the one who doubles you you shoot or stab him through the open window ?? No that can't be because driving on the left side was formalised in a Papal Edict by Pope Benefice around 1300AD who told all his pilgrims to keep to the left. Christians are supposed not to kill (except for religion and in the name of God) and should rather love each other.

After the French Revolution, instincts of self preservation forced the Aristocracy to join the peasants on the right hand side of the road, if they wanted to keep their heads on their shoulders and not land in a basket under the guillotine. The first official record of keeping on the right was introduced in Paris in 1794. The change from left to right was then carried out all over continental Europe by Napoleon. The reason was because Napoleon was left handed and had to march on the right to defend himself with the left hand. That's why probably he lost the battle of Waterloo !

From then on, any part of the world which was at some time part of the British Empire was driving left and any part colonised by the French was driving right. Conclusion, thanks to Napoleon, now when I want to cross the channel I have to learn to drive on the "wrong" side and try not to run over more people than necessary.

In America, the French colonised the southern states (Louisiana for instance) and the Canadian east coast (Quebec). The Dutch colonised New York (or New Amsterdam). The Spanish and Portugese colonised the southern Americas. So The British were a minority in shaping the 'traffic' and that's why the drive-on-the-right policy was adopted by the USA, which was anxious to cut off all remaining links with its British colonial past !

Once America drove on the right, left-side driving was ultimately doomed. 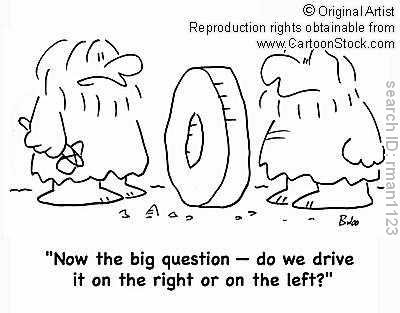 Labels: Right and left side driving