Today is the National Day in Belgium (Fête Nationale) . This year even more interesting because it is the second time we celebrate a national day still without government ! We are ready for the Guiness Book of Records no country ever in this world has been without govnerment for more than one year;

As usual there will be the politicians to convince us that we have to dislike each other I mean the Flemish and the Waloons because we are supposed to have language problems. The problems are only political because the Belgian people have no problems with that, except a few fanatics on both sides of course.

The fact that there is no government doesn't bother the majority of the commun people. As long as the Belgian has his comfort and no major problems he takes it with humor and rather no interest. As the TV News are always the same concerning politics, they switch to a French channel or the Flemishs to the Dutch's channels to keep them informed what is going on in other countries and the world in general.

Everything goes smooth and even better than with a government we think.

So we will celebrate our National day together with the King and Queen and the whole Royal family, the same clowns Politicians from one and a half years ago who are on standby will be on the tribune too to watch the parade and there will be the same speeches with a few different words so that it doesn't look like the speech from the year before.

We will celebrate with picnics in the parks if it doesn't rain and watch the fireworks.

A friend I haven't seen for a long time will visit us and we will go to a nice restaurant and maybe watch the festivities in Waterloo if it doesn't rain. 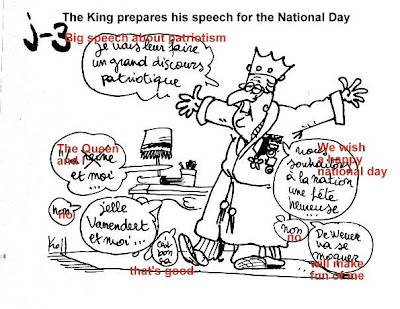 Bonne fete nationale to you, the king and queen, Mr. G. and the cats.
But I'm jealous. I wish we didn't have a government in Canada.

I love your philosophical attitude to having no government! At the moment, I could happily live without one!!

Have a lovely day :)

How interesting - no government. I would think that would produce a much friendlier, united country. Happy National Day!

Happy National Day! I didn't realize that there wasn't a government.

Happy National Day.
Still no Government!! Perhaps that's a good thing. Or you can have ours if you like, we don't like ours very much at the moment and would like the chance to choose again at an election.

Happy national day. That is unbelievable, no government for over a year. Still they are all useless anyway.

People Who Know Me Would Say: said...

Happy National Day! I like to entertain myself with thoughts of no government sometimes too.

New follower.
And I can't believe you have no government. Can I come over for a while? I'm sick of all the crap around here.

I hate to admit that I didn't even know. Hope people are feeling secure - I guess there would have been a revolt if they weren't... Have a nice day with your friends and family! {:-Deb

Happy National Day!!!
See, we pay them for nothing and so they give each other pay increases behind peoples backs.
No one needs to know.lol

Gattina, this was such a fun post to read. Hope you had a wonderful day and wishing you a great week ahead!

Maybe no Government works in Belgium but here in United States it actual scares me.

It's amazing that you are a doing so well, minus a government! Sometimes, I think our politicians are screwing things up so much, we should send ours packing and see how we function without them!!

My Alphabe Thursday is at:

Hope you have a terrific weekend!

If nothing else, it sounds like National Day gives everyone a holiday to enjoy. Hmmm, no government, an interesting concept.

What an interesting fact. I did not realize there wasn't currently a government installed. Too bad the politics wasn't gone as well. Happy National Day!

Happy National Day! It would be different to operate without a government. Sometimes I wonder if we would start saving some money if that were the case here.

Thanks for a nifty link this week.

A little late to wish you anything for National Day, Gattina... Perhaps the whole world would be better without politicians... what a mess they are making everywhere! :-)

politics and politicians exactly the same here, except there's still government. Geez, they don't REALLY want the world to be a better place.
sounds like you have some great plans for National Day! Enjoy!