Already before Christmas I started to see the world in black and often had serious lacks of energy. It hasn't happened to me since 6 years and I was quiet worried that I didn't feel my good old self when I got up in the mornings. In the past I had suffered from seasonal depressions, but that always happened from October on, finished in January and it's quiet a long time I haven't had it anymore.

People who know me are not used that I am suddenly feeling like a motor without petrol. My friends said that as I am a sunshine person it's probably because the winter is so dark this year and we don't have enough light. More and more people also talk about light therapies and energy light lamps are the big hit this year !

My friend Dominique has such a lamp. As she doesn't need it for the moment she lent it to me so that I would get my dose of light which apparently I need. Today I used it for the first time. I put it on my little table and suddenly the room was full of light ! I didn't know how long I could use it and also wanted to know a little more about light therapy. Wikipedia gave me the answer (as usual).

"Indian medical literature dating to 1500 BC describes a treatment combining herbs with natural sunlight to treat non-pigmented skin areas. Buddhist literature from about 200 AD and 10th-century Chinese documents made similar references"
Again, we the Western sophisticated world has only discovered this recently and makes it popular as if they had invented it. Suddenly these lamps and light boxes are "in" and become more and more popular and a new money making market has been created.

That's absolutely great, probably next week I can show you my hairs hanging down to my heels, no cat scratches on my hands anymore, a terrific blood circulation (hopefully through my brain too) and no colds ! And according to the Indians and Buddhists I will have a skin of a 20 year old ! 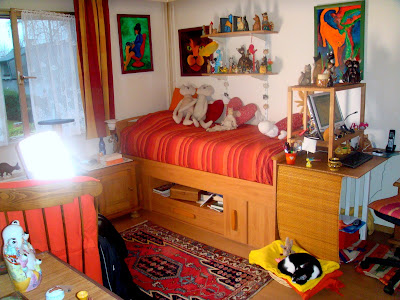 PS. Reading your comments I have to precise that this therapy has nothing to do with the sun or sunlight, or sunshine, it's just the brightness.
Posted by Gattina at 06:52

I'm sorry to hear you have been feeling so black. I have heard of seasonal disorder but it doesn't happen so much here. I hope the light therapy works for you.
Here we are told to cover up in the sun or at worst get skin cancer, at best get wrinkles and skin like leather. Then doctors find we (me included) don't have enough vitamin D.
I think that light therapy might energise Rosie and Arthur too much.

Well, I hope you the light therapy works and you will feel better very very soon!

At least light is probably a bit cheaper and definitely healthier than pills and potions!

Hope you feel much better with the light therapy. Here we can't avoid the sun which gives me heat rashes. The glare sometimes kicks off a migraine.

Since my eye surgeries, I actually have the reverse problem. If I have too much light, it is very difficult to stand. I get migraines. I think I could live in Seattle (it always is rainy and dark) and be happy.

Coincidentally, you're the second person I've come across who's trying light therapy and she made positive remarks too.

5 minutes with your face in the sun can do wonders for your mood. Of course, when there's no sun you have a problem. Some extra magnesium can help too. I hope you feel your usual chipper self soon.

Oh no, Gattina, you've always given me the impression of being a sunny person. Yet, I know how you CRAVE sunshine in these bleak and dreary months of European winter. I hope you are feeling better. You always cheer me up, so I hope all our comments have cheered YOU this time. (((Hugs))) Jo

Glad to hear the light box is working for you. The days are lengthening - 15 minutes a week - and soon we shall have more sun.

Oh YAY for light therapy. I know my own doctor has recommended it to me in the past...I usually have a "touch" of Seasonal Affective Disorder"...it is a real disorder but my case is very mild for which I say PRAISE GOD!! This year hasn't been too bad and I do believe it is because i have more natural sunlight coming in thru the windows.....we have had lots of snow for our area of New York State BUT...we have not had as "dreary" or grey of a winter as usual years. In fact, right now, I am sitting in full afternoon sun here in my living room and loving it altho it is a mere 7 degrees outdoors! (fahrenheit). blessings to you Gattina

light does help to brighten up your day. I think every one gets down when they wake up to dull weather day in and day out. I know I do. This is why snow is appreciated because it's soft and white and clean and bright lol
And if you don't have to go to work you can curl up and enjoy the beauty outside and feed the birds etc...But every day of that also has its' pain in the ass attributes.

when I had my first baby -- I got light therapy on my you know where part.
It was so soothing and warm.

oh... and you are in good company with the winter blues.

We had a sunny day yesterday and today -- very inspiring!

ps. @ Maribeth
no no no.. Seattle has some beautiful sunny days

I grew up near there and the rain made it green, not black (:

Rosie might actually like your light therapy. I've been told cats are solar-powered.
I hope you're feeling better soon. We have lots of snow here right now, but we also have lots of sunny days. Southern Alberta is the sunniest part of Canada.
-- K

I hope you will be the true yourself soon and you'll see all pink again!