A JACK AND JILL BATHROOM ?

The first time I heard about a "Jack and Jill" bathroom was in the series "Escape to the country". I know this kind of bathrooms, but why is it called Jack and Jill ??

In the other languages I know it's called 2 bedrooms with a common bathroom. I agree, it's longer to say than just a Jack and Jill bathroom.

I tried to find out the origin of this expression. No way, even Google didn't know. They all refer to an English nursery rhyme : 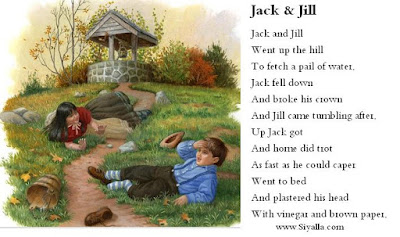 Now what the heck this rhyme has to do with a bathroom ? I tried to find out who invented the Jack and Jill bathroom, but apparently nobody knows !

The best answer I could find was : It is called that because it is a bathroom that adjoins two bedrooms -- generally separating the two. And the most common gender in families with two children is one male and one female. Hence, the bathroom usually separated a girl's bathroom from a boy's bathroom. And the original designer of the first J-and-J bathroom had 2 kids -- one named Francis and one named Mervyn." Which still doesn't say why is it called Jack and Jill instead of Francis and Mervyn ?

If full privacy is not required, for example to wash one’s face or brush one’s teeth, the opposite door need not be locked. This would allow the other party to make simultaneous limited use of the bathroom, especially if it contains a washbasin for each bedroom.

Does someone know the answer ?

I have no idea why it would be called Jack and Jill bathroom! But it's a great idea. We booked a family room in a "poash" hotel last November. It had two double rooms and a communal bathroom/shower, basins etc in the middle. Grant and I slept in one bedroom and Rina slept in the "kids" bedroom. It was far cheaper than booking one double room for us and a single for her.

Jack and Jill are just names that were once very common. We might also say Bill and Mary. A French equivalent if you needed two common names might be Pierre and ummm, Pierre and Monique. Anyway, I did not know what Jack and Jill bathrooms are, but I do now.

I don't know the answer. But it would seem like a "tall order," to expect kids to remember to do all that locking and unlocking!!! -grin-

Happy weekend coming to you,
artmusedog and carol

I just assume that it was a description of a bathroom that could be shared by different genders.

I have only seen them in hospitals here. Where two patients share one bathroom.Fun60 has a good definition.

Clever topic for J. I always assumed they are called Jack and Jill bathrooms because the are meant for two genders sharing the same bath. Good luck if one is a teenage girl! '-)

I've never heard them called that before but I have visited a few friends who have one.

I had no idea that there was term for such a bathroom. You've got me curious now.

Well, that is a great question. I'm afraid it looks like we'll never have the answer.

I've always wondered that myself.

But google doesn't supply any more answers to me then it did it you!

I've always thought those bathrooms were Just such a great idea, though.

Thanks for linking this fun post to the letter J.