One of our neighbors apparently got rid of some old furniture and carried it out of the house and put it on the sidewalk.

My cat Arthur found that very interesting, crossed the street and immediately jumped on a little table standing there. Phil the neighbor got a shock he hadn't seen him arriving so Arhur jumped off the table and to say hello.

Phil petted him and returned into the house followed by Arthur of course. Then he came back with carrying an old TV while Arthur turned around his legs. The poor man almost fell down the steps. He tried to kick Arthur away as gently as possible and told him to go away (I rather thought ... to hell)

Arthur suffering from bad hearing when he wants to, walked with Phil until he put down the TV, and immediately jumped on it. There he sat, watching what Phil would bring out next. It was a lamp with a string hanging down. Arthur thought what a kind man he even puts toys on the sidewalk, and started to play with the hanging string. Phil stumbled against the steps. He asked Arthur again to disappear, but Arthur wanted absolutely to help. Phil now came out with an awful looking green velvet armchair. It must have been quite heavy as the poor man was red in his face from the effort. While he put it down, Arthur jumped happily on it and found that this was a real good napping place. Phil didn't agree.

Finally I had laughed enough, and thought it was time to free poor Phil from Arthur and went over asking if Arthur didn't disturb him too much. He sighed an said, Arthur is really a very friendly and cute cat, but could I lock him in until he finishs ? I looked at Arthur who meanwhile had rolled up into a snail and pretended to sleep. Then I tried to pick him up which was quite difficult because he started to struggle but I managed to carry him over to our house.

Arthur, now really angry, tried to jump off my arms, but I was already in the garage and closed the door. He gave me a mean look stood in front of the closed door and said meauw in his deep voice just once. But then he started to sing all songs he knew and in all tone scales. I ran to the bathroom for earplugs ! until I could let him out again ! 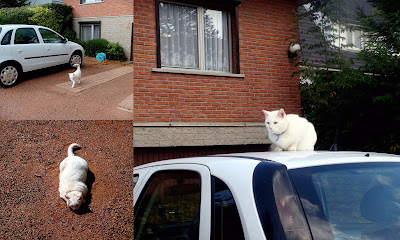 For those who don't know him, here is Arthur in the street. I didn't dare to take a picture of my neighbor with his junk !

The use in Belgium is to offer Lillies of the Valley for the first of May
Posted by Gattina at 06:00

Hahaha. Arthur, Arthur, Arthur!
I know what it's like in the battle of voices. Cats meow and I scream QUIET! You should have hidden yourself behind the curtains and taken some photos through the window of Arthur helping your neighbour earlier. :)

Arthur is SO CUTE....
A TRUE ARISTOCAT, isn't he now?
Cats are truly smart , don't you think?
Have you a great Sunday, Gattina.
hugs
shakira

Wow! Arthur is a certified cutie!^^

Too funny....too sweet...and what a cat tale...errr, ummmm TAIL. That Arthur is the KING of his own Camelot.

I have a triple weekend funnies today.

Hope your Saturday has treated you well. And Arthur too.

That Arthur is such an adventuresome boy! A cat after my own heart! And such a HELPER too! Poor Phil!

I am sO glad that you can understand MY English - I wonder will I be able to understand yours!? LOL! One way or another!

That was a great story!! Thanks for the laugh and thanks for linking up with me again :) Happy Saturday!

Arthur seems to have lots of personality. He needs to learn that not everyone takes a fancy to cats.

The Lily of the Valley tradition is nice.

I think I read that there is also a Lilac Festival in Belgium soon.

Oh that little devil, Arthur! He will just have his own way, won't he? Got to love him!